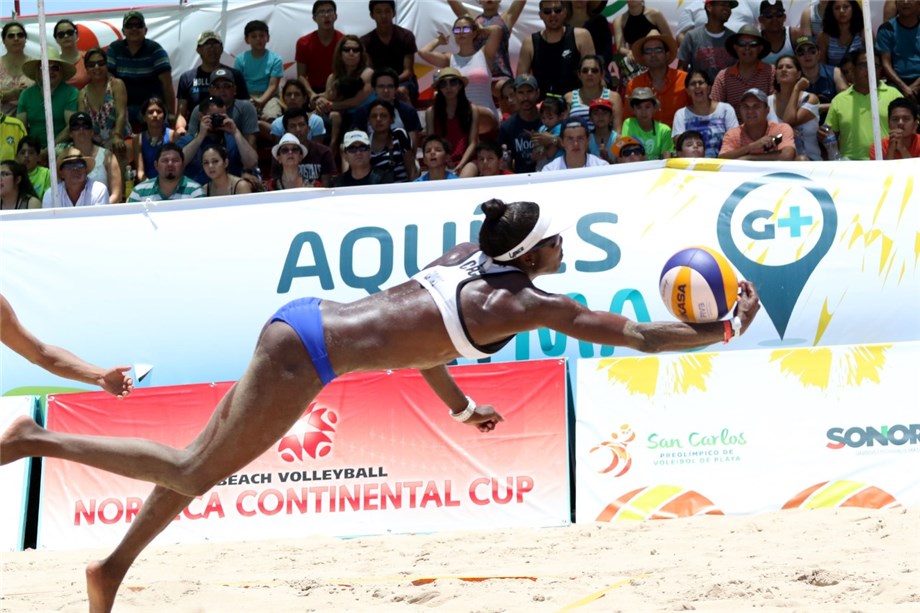 Guaymas, Mexico, June 27, 2016 – Costa Rica sealed an historic berth at the Rio 2016 Olympic Games as they defeated hosts Mexico in the final of the NORCECA Beach Volleyball Continental Cup on Sunday afternoon.
Related information:
Rio 2016 Olympic Games
Olympic volleyball qualification process
The versatile duo of Karen Cope and Nathalia Alfaro claimed two of the victories while Marcela Araya and Valeria Valenciano sealed the Olympic ticket for the Central American country.
Mexico won the first match of the best-of-five series when Claudia Rios and Gloria Santoyo stormed past Araya and Valenciano 2-0 (21-10, 21-12) in a morning match only to watch Cope and Alfaro responding by winning a three-set battle 2-1 (21-12, 11-21, 15-5) over Diana Estrada and Zaira Orellana to tie the contest at 1-1.
In the afternoon session, Cope/Alfaro beat Rios/Santoyo 2-0 (21-12, 21-18) before the a victory from Araya/Valenciano 2-0 (23-21, 21-18) sent the Costa Ricans into celebration mode.
“It is a dream coming true,” Alfaro said minutes after the victory. “We have been working hard for this and today we feel so proud, we are already in Rio.”
For Costa Rica it was a special celebration as the four players kept running around the court carrying their country’s flag even after the awards ceremony.
In the series for third place, Cuba swept Guatemala 3-0 to secure a spot at the FIVB World Continental Cup in Sochi, Russia from July 4-10 where they will be joined by the second placed Mexico as teams from all the corners of the planet will be battling for the last two tickets to the Olympic Games.
Lianma Flores and Leila Martinez defeated Natalia Giron and Estefanie Bethancourt 2-0 (21-11, 23-21) and then won 2-0 (21-15, 21-13) against Maria Jose Orellana and María Andrea Orellana. Cubans Yanisleidi Sanchez and Lidiannis Echeverría had won the first match 2-0 (21-13, 21-13) over the Orellana sisters.
Click
here for complete results