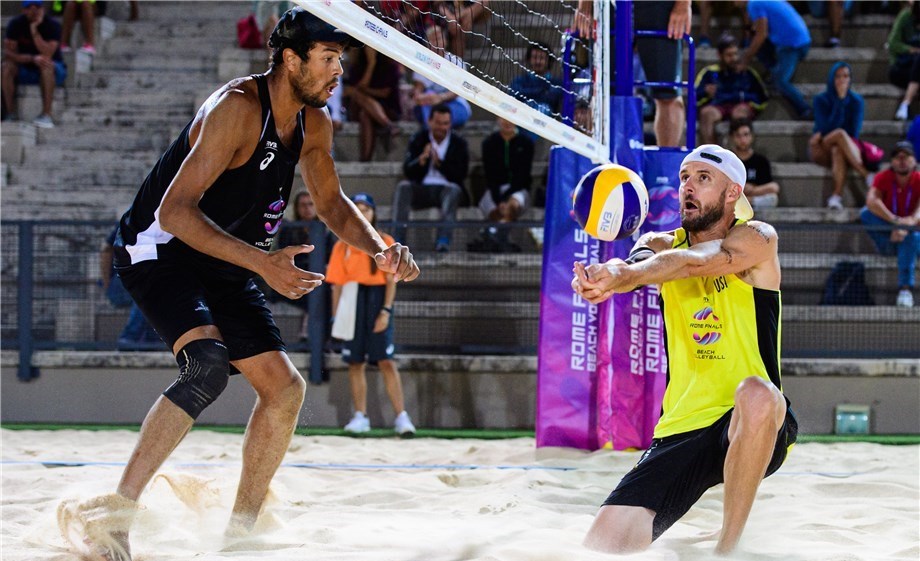 Rome, Italy, September 6, 2019 - It was a tough day here Friday for the American beach volleyball effort at the $600,000 FIVB World Tour Finals at the Foro Italico, and thankfully for Taylor Crabb and Jake Gibb, the North American country will have a team performing Saturday. 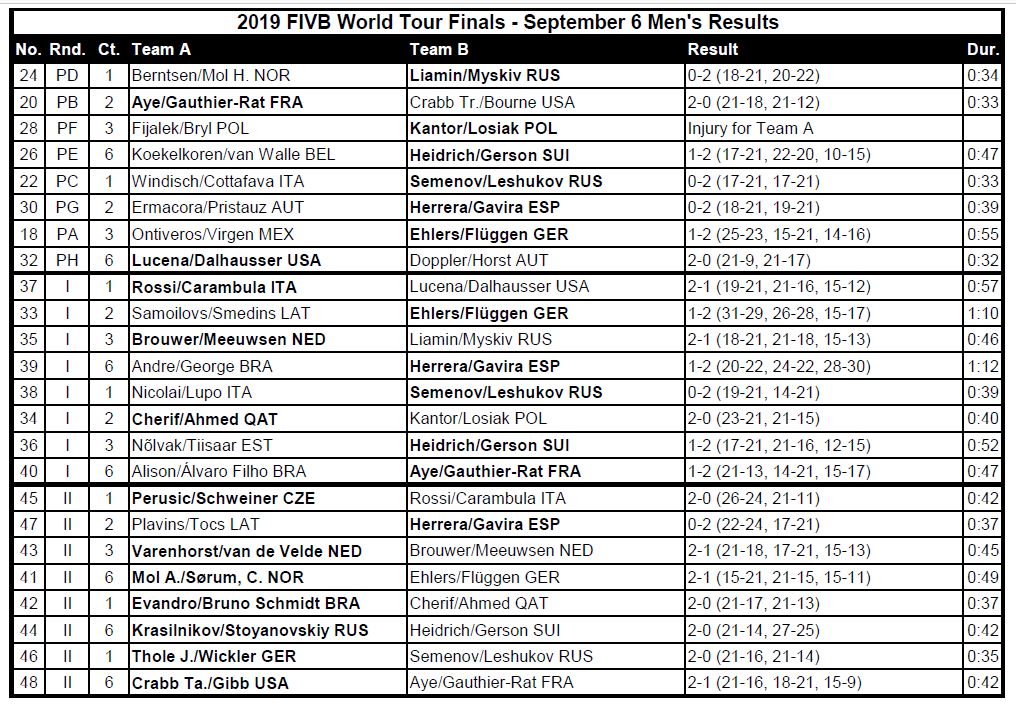 Entering this week's FIVB World Tour stop, American beach volleyball pairs had enjoyed success in the Italian capital with three men's and one women's gold medal in the last four stops at the Foro Italico with at least one USA tandem on the podium from 2010 through 2013. Gibb, the oldest player competing this week at 43 with 15 seasons of FIVB experience, was part of one gold medal team when he and Sean Rosenthal captured the title in 2012.
With three men's and four women's teams in the main draw competition this week at the World Tour Finals at the Foro Italico, the United States squad has won only 11 of 20 matches with Crabb and Gibb leading the way with a 3-0 record to reach the men's quarter-finals here Saturday.
Playing in on of the last matches late Friday evening on an outer court at the Foro Italico, the 17th-seeded Crabb and Gibb scored their third win by posting a 2-1 (21-16, 18-21, 15-9) victory in 42 minutes over 31st-seeded qualifiers Quincy Aye and Arnaud Gauthier-Rat of France.
Quick links - Beach volleyball:
FIVB Beach Volleyball World Tour Finals - Rome
Facebook
Twitter
Instagram
In advancing to a FIVB World Tour quarterfinal for the first time this season after placing ninth five times, Gibb said “that was a monkey off our back. We’ve had nothing but ninths all year but that was huge for us. I feel like that monkey is off our back and now we can go win this thing.”
Gibb added that in the second set against the French “we started playing a little ‘play not to lose.’ You could tell they were tired; this was their third match and we were like ‘Oh, we just have to keep this on them.’ We were playing that reserve game and that’s not us at all, so we had to kind of flip the switch and say, ‘Let’s go do this, let’s earn it.’”
In playing one of the last matches Friday, Crabb added “it kind of brings me back to my indoor days because we play one match and it’s always at night so you just kind of do your thing during the day and make sure you’re ready to go later on. We didn’t get much sleep because we had a late game last night. We got to sleep in, took care of our bodies and we were ready.”
While the American were playing their first match Friday after posting pool wins Thursday over tandems from Germany and Italy, the French were playing their third match of the day as Aye and Gauthier-Rat advanced to the Round of 16 with seed-break-through triumphs over 15th-seeded Tri Bourne/Trevor Crabb of the United States and fourth-seeded Alison Cerutti/Alvaro Filho of Brazil.
Joining the American in the men’s quarterfinals Saturday afternoon will be second-seeded Anders Mol and Christian Sorum of Norway, who have now won 23-straight FIVB World Tour matches after ousting 16th-seeded Nils Ehlers/Lars Fluggen of Germany 2-1 (15-21, 21-15, 15-11) in 49 minutes. 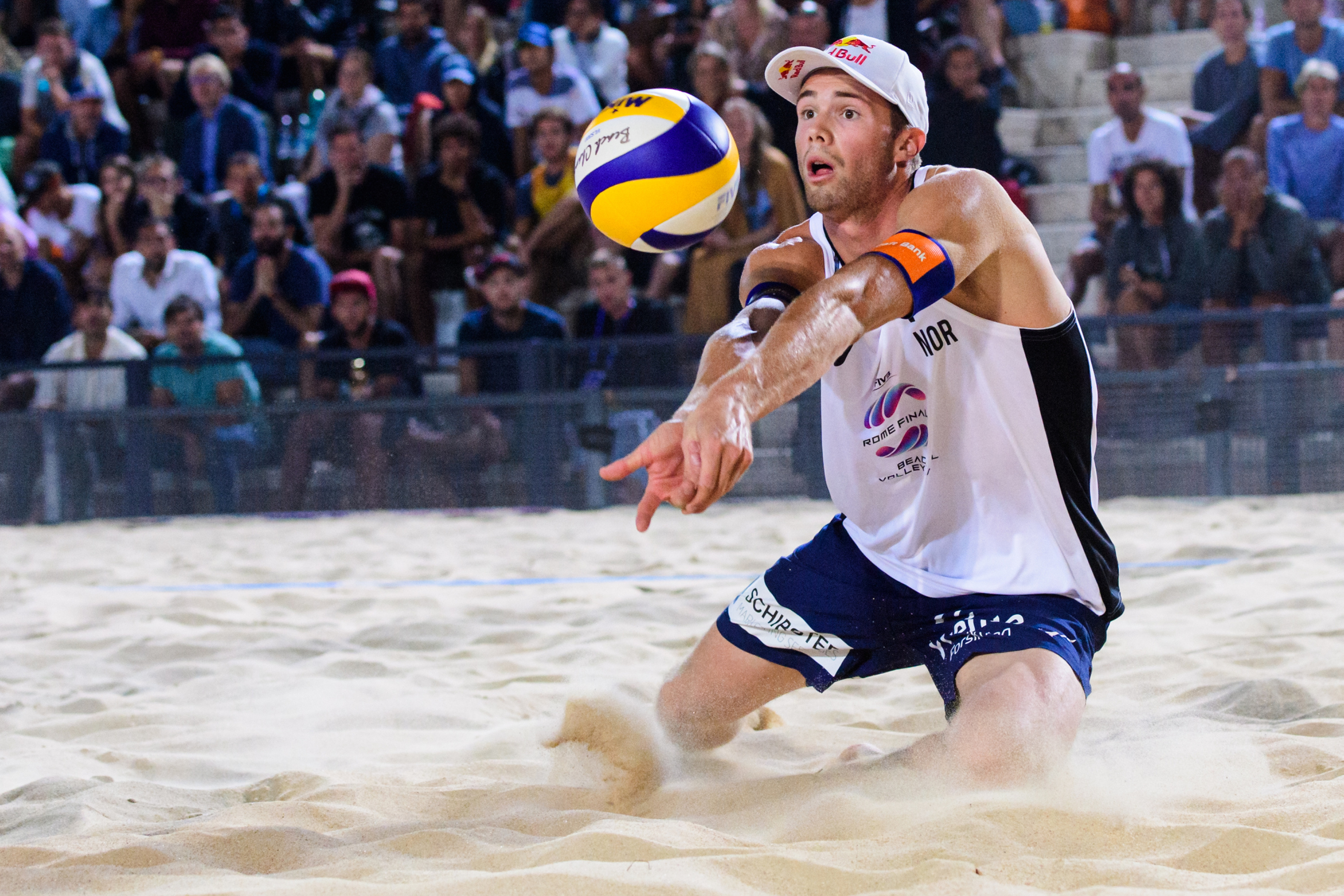 Anders Mol of Norway
The young Norwegians, who have now compiled a 69-4 match mark this season, play 10th-seeded Evandro Goncalves and Bruno Oscar Schmidt of Brazil in one of the four Round of 8 matches.  The two teams have meet three times this season with Mol and Sorum winning twice and the Brazilians posting a gold medal victory over the Norwegians June 16 in Warsaw, Poland.
While Gibb and Crabb meet 23rd-seeded Adrian Gavira/Pablo Herrera of Spain in the quarterfinals, other Round of 8 matches have 25th-seeded Christiaan Varenhorst/Steven van de Velde of the Netherlands challenging reigning world champions and third seeded Viacheslav Krasilnikov/Oleg Stoyanovskiy of Russia and fifth-seeded Julius Thole/Clemens Wickler of Germany meeting 13th-seeded Ondrej Perusic/David Schweiner of the Czech Republic. 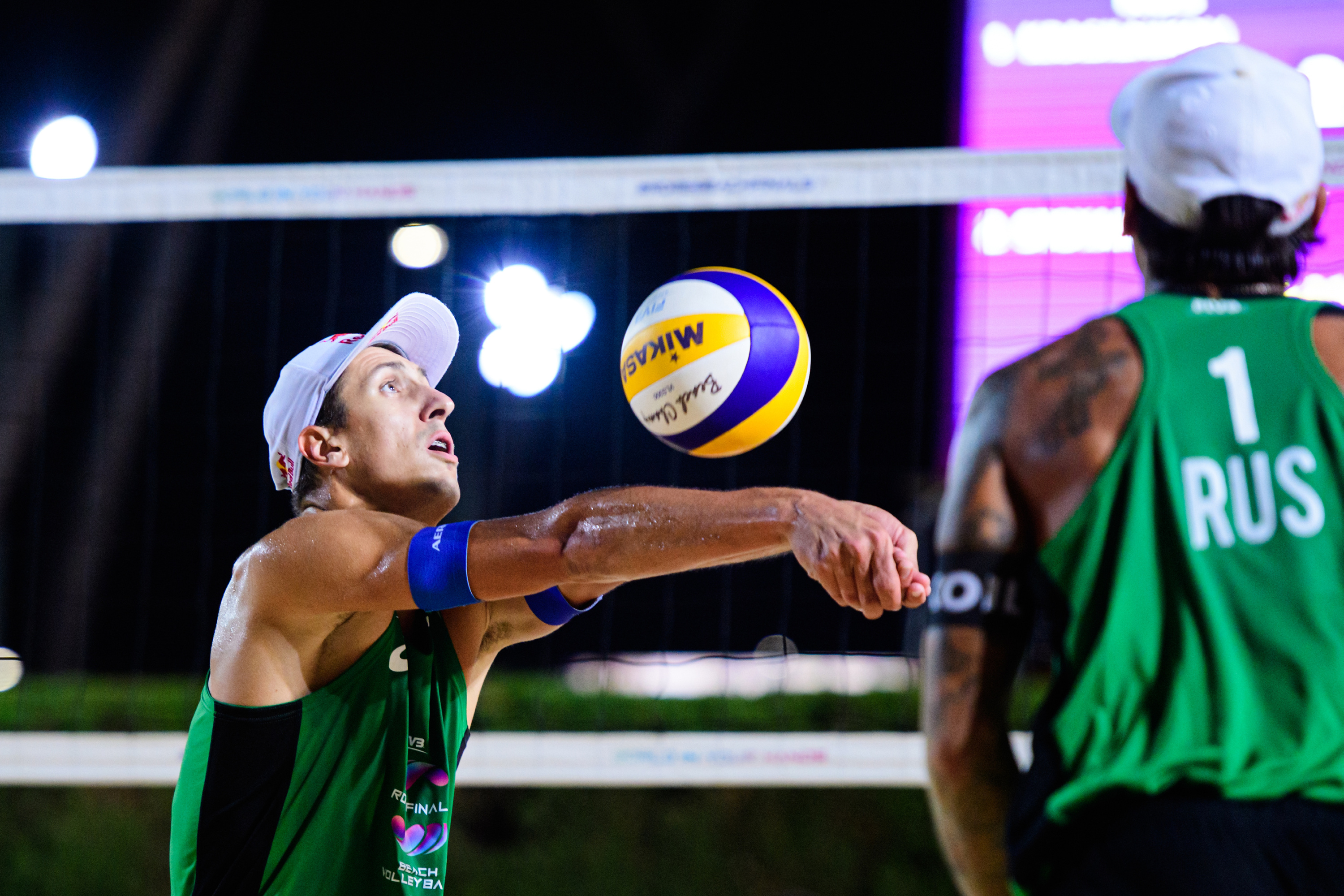 Oleg Stoyanovskiy of Russia
“We’re stoked to be playing here at the World Tour Finals," said the 22-year old Stoyanovskly as he and Krailnikov have reach a FIVB quarter-final for only the second-time in four events since winning their world championship title July 7 in Hamburg, Germany.  "We’re really looking forward to finish this season with a good result, especially here in Rome. It’s a beautiful city and a great venue and we’re glad to be here.”
With the FIVB World Tour Finals quarter- and semifinals for men and women Saturday, the medal matches will be played Sunday at the Foro Italico where the winning teams collect the $40,000 first-place prizes.