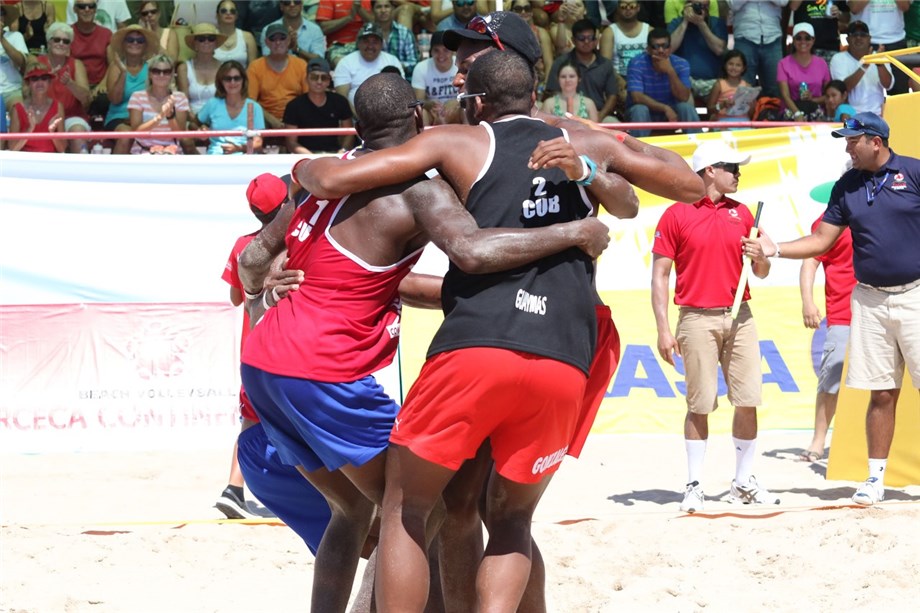 Guaymas, Mexico, June 27, 2016 – Cuba will be represented at the Rio 2016 Olympic Games after they triumphed at the NORCECA Beach Volleyball Continental Cup, beating Canada in the decisive series in Mexico on Sunday.
Related information:
Rio 2016 Olympic Games
Olympic volleyball qualification process
The Cubans recovered from losing the first match of the best-of-five country versus country series and won three in a row to earn an Olympic berth.
Josh Binstock and Sam Schachter gave Canada a 1-0 lead with a 2-1 (20-22, 21-17, 15-11) victory over Karell Peña and Daisel Quesada in the first match, but Cuba recovered behind the powerful tandem of Sergio Gonzalez and Nivaldo Díaz to win the next two matches.
Gonzalez and Díaz won 2-0 (21-18, 21-18) over Sam Pedlow and Grant O’Gorman and then defeated Binstock/Schachter 2-0 (24-22, 21-18). Quesada completed the job with a 2-0 (21-17, 21-13) against Pedlow/O’Gorman.
The Cuban team selected to participate in the Rio de Janeiro Games will join compatriots Francisco Álvarez and Juan Rossell as the only duo from the country to take part in the Olympics. Álvarez and Rossell participated at the Atlanta 1996 and Athens 2004 Games.
In the series for third place, hosts Mexico edged Puerto Rico 3-2 with Josue Gaxiola and José Luis Rubio joining forces to win the decisive “golden set” 15-9 over Hector Soto and Juan Ribas.
The second and third placed teams of the tournament will have a last chance to qualify to the Olympics at the FIVB World Continental Cup to be held in Sochi, Russia from July 4-10 where the last two tickets to Rio de Janeiro will up for grabs.
Click
here for the complete results