Czech women bound for Rio instead of holidays 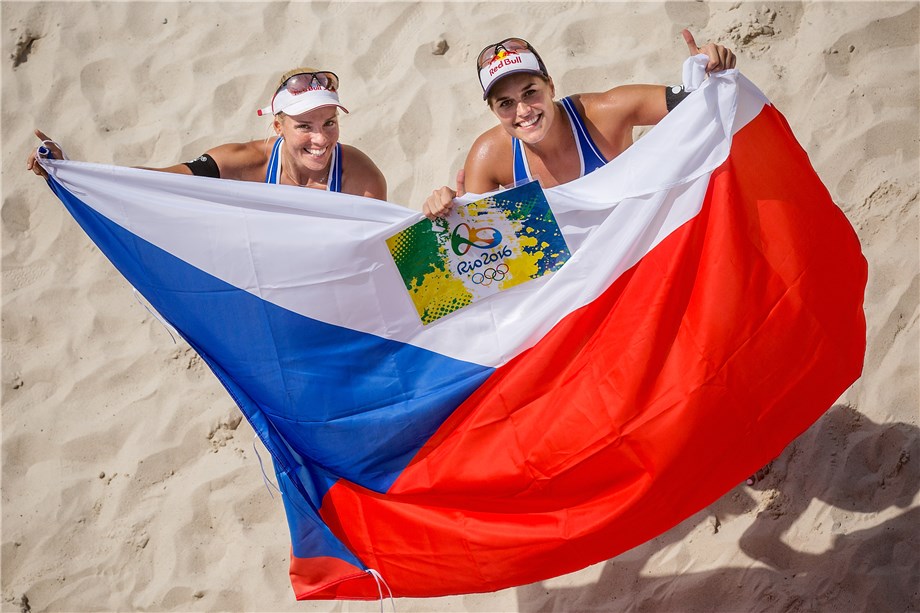 Sochi, Russia, July 10, 2016 – The Czech Republic women claimed one of the two remaining Olympic tickets at the FIVB World Continental Cup on Sunday with a 2-1 win over China. Marketa Slukova and Barbora Hermannova defeated Chen Xue and Xinyi Xia 15-12 in the golden set in Sochi and will travel to the Rio Olympic Games in less than a month.

Not counting on qualifying for Rio de Janeiro in their first year as a new team, Slukova and Hermannova have to call the travel agency to change their ticket, Hermannova said.

“It’s totally amazing, I don’t have any words. I am so super happy and proud of our team, not only here, but the whole year. It’s not even been one year we played together. We qualified but we didn’t even plan these Olympics. I was planning my holidays during the Olympics, but I am totally happy to chance my plans.”

In a rematch of Friday night’s pool play decider, which was won by China, Kristyna Kolocova and Michala Kvapilova were very close to upsetting China’s number one team Chen Chue and Xinyi Xia (21-19, 20-22, 15-11).
The Czech girls warded off a Chinese matchpoint in the second set and enforced a tiebreak winning the set 22-20.

At 11-8 for China in the tiebreak, Kolocova and Kvapilova came back to 11-10 and had the chance to level, but Kvapilova hit a wide shot. China then closed the match at 14-11 when Kolocova cut a ball too short.

Slukova and Hermannova blazed past Chunxia Chen and Ningya Tang in the second set (21-12, 21-13) and had two hours to prepare for the golden set against Chen Xue and Xinyi Xia. The Chinese took a small lead from the start, but the Czech took over leading 10-6. Xue and Xia came back to 9-10, but at their second setpoint Slukova hit the winner: 15-12.

“We really had some lucky balls, some serves that worked for us”, said Slukova. “But we have a saying in Czech: Luck is with the one who is prepared. And I think we were prepared this time. We gave it our all and we really wanted this to happen.”

The Czech federation already decided upfront to send Slukova and Hermannova to the Games if they would get the ticket. For Hermannova this will be her first Games, but Slukova already had Olympic experience. At the 2012 London Olympic Games Slukova and her partner at that time, Kolocova, suprised everyone with a fifth place.

Slukova took a moment to thank her old partner for their help at the World Continental Cup. “They played very good and they made the Chinese tired today. So a lot of the credit goes to them. Thank you girls!”

The Czech girls will complete pool B at the Olympics, with Agatha/Barbara (BRA), Elsa Baquerizo/Liliana Fernandez (ESP) and Ana Gallay/Georgina Klug (ARG).

The winner of the other Sochi semifinal between Russia and Austria will be added to pool A. The line-up for the semi is:

If needed a golden set will be played.