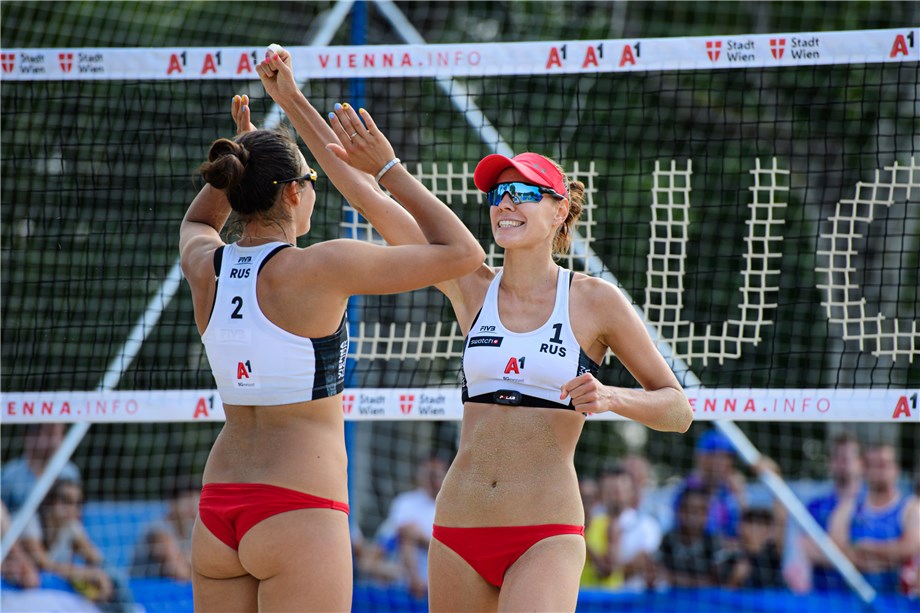 Vienna, Austria, July 30, 2019 - What was expected to be an All-Russian match to qualify a team for the A1 Major Vienna women's main draw did not materialize here Tuesday afternoon.
Quick links - Beach volleyball:
FIVB Beach Volleyball World Tour - Vienna
FIVB Beach Volleyball World Tour - Ljubljana
FIVB Beach Volleyball World Tour - Malbork
Facebook
Twitter
Instagram
But the result still favoured Russia as 13th-seeded Ksenia Dabizha/Daria Rudykh advanced to the main draw rounds at the FIVB Beach Volleyball World Tour event by avenging a setback by compatriots Ekaterina Birlova/Evgeniya Ukolova to the Klinger sisters (Dorina and Ronja) of Austria.
The 29th-seeded Klingers opened qualifying play on Tuesday with a 2-1 (19-21, 26-24, 15-11) win in 59 minutes over the fourth-seeded Birlova and Ukolova to advance to an afternoon match against Dabizha and Rudykh, who defeated a team from Poland in the first round.
Competing in their sixth qualifier this season on the FIVB World Tour, Dabizha and Rudykh advanced for the fourth time from the preliminary rounds to the main draw with a 2-1 (21-18, 15-21, 15-8) win in 45 minutes over the Klingers.
“It means a lot for us to qualify again,” said the 25-year-old Dabizha after her team's victory over the Austrians. “Qualifying is not easy and I think we’ve been doing a good job. Step by step we’re getting a better team and getting better results. We obviously want to be in the main draw soon and this tournament is a good chance for us since it’s a Major and we can win a lot of points if we do well.”
The 22-year-old Rudykh added "it’s always hard playing the home teams and the fans were very loud here. We knew they’d have massive support from the fans, and we prepared for it, but at times it was very hard to keep our focus. But going through this situation only makes us stronger going forward.”
Two teams each from Brazil and Germany advanced from the $600,000 A1 Major Vienna qualifier along with pairs from Latvia, Spain and the United States. Brazilian pairs moving forward to Wednesday’s schedule were top-seeded Maria Antonelli/Carolina Salgado and sixth-seeded Talita Antunes/Taiana Lima. 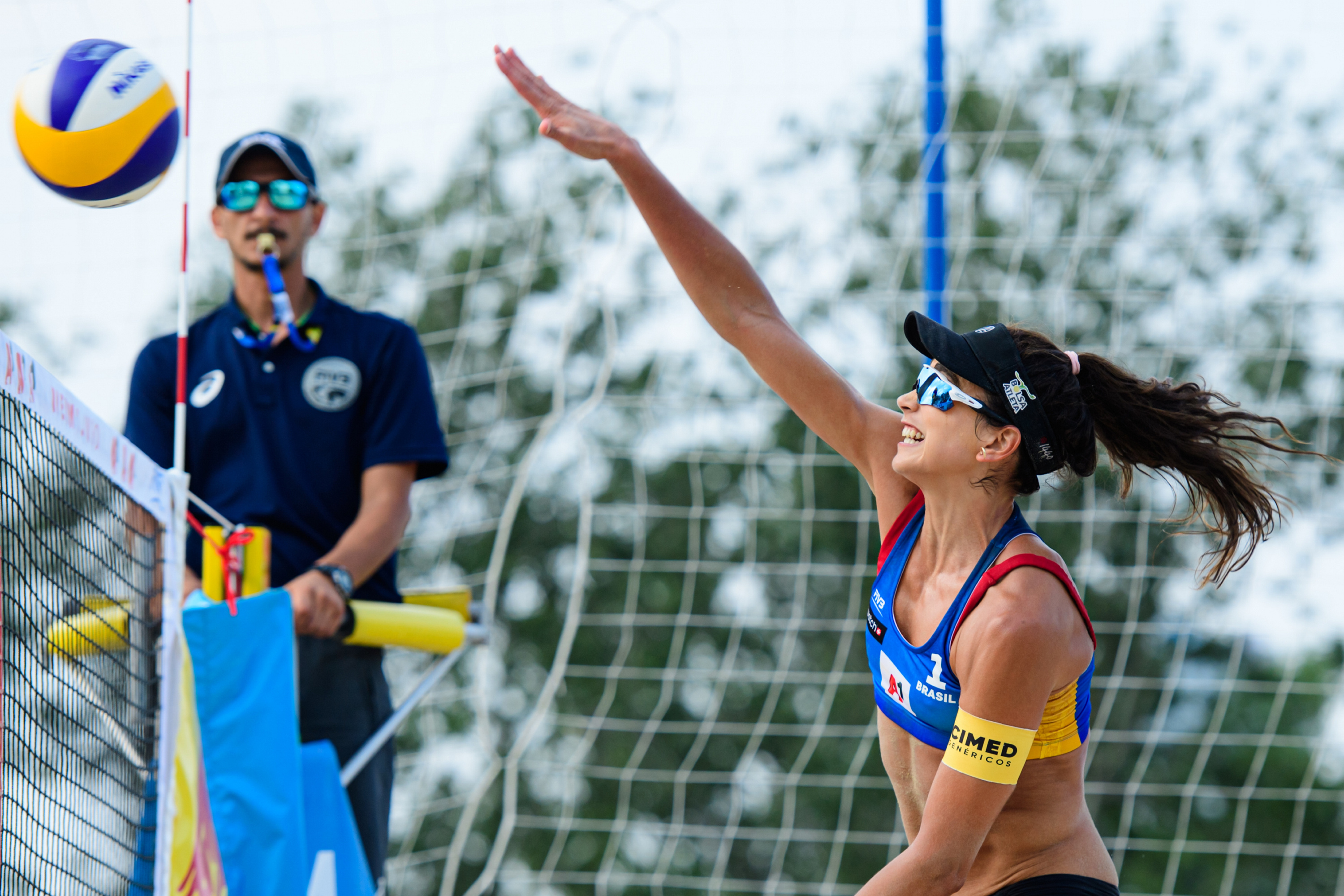 Hitting the volleyball is Carolina Salgado of Brazil
Laura Ludwig, who captured the 2017 FIVB Beach Volleyball World Championships in Vienna with Kira Walkenhorst, teamed with her seventh-seeded partner Margareta Kozuch to secure the last qualifying berth Tuesday for Germany. Seventh-seeded compatriots Victoria Bieneck/Isabel Schneider were the first German pair to advance Tuesday.
Other teams netting main draw berths on Tuesday were second-seeded Kelly Larsen/Emily Stockman of the United States, third-seeded Tina Graudina/Anastasija Kravcenoka of Latvia and 21st-seeded Maria Carro/Paula Soria of Spain.
Wednesday's A1 Major Vienna women's schedule will feature two rounds of pool play with the group winners advancing to Friday's Round of 16 elimination bracket while the second- and third-place finishers in each pool play on Thursday in the first round of the knockout phase of the competition.
The women's semifinal and medal matches will be played Saturday. 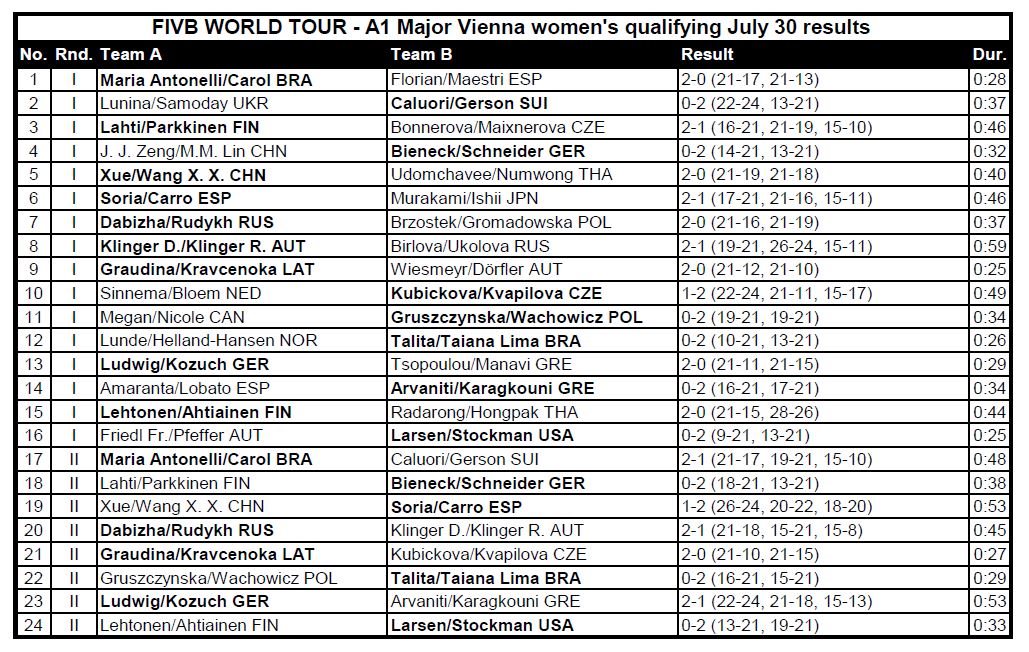