Dalhausser and Lucena better than ever?

Long Beach, California, USA, August 8, 2020 - The question said it all.
It said more than Phil Dalhausser and Nick Lucena’s two consecutive wins at the AVP Champions Cup in Long Beach, California. More than the fact that, at the time the question was asked, Dalhausser and Lucena had lost just two sets in 11 matches in three weeks. It said more than Dalhausser’s 25 aces in those 11 matches, or his 53 blocks, or Lucena’s 137 digs – all of which were leading the AVP in their respective categories in the three-week-long series of a season.
After Jake Gibb and Taylor Crabb topped Casey Patterson and Theo Brunner in the quarterfinals, setting up another meeting with Dalhausser and Lucena in the semifinals of the Porsche Cup, Dain Blanton wondered if this was the best volleyball Dalhausser, at 40 years old, had ever played.
It was a simple, innocuous question, yet it said virtually everything you’d need to know about the state of American beach volleyball.
There might be some new kids on the block – Taylor and Trevor Crabb and Tri Bourne prime among them – but Dalhausser and Lucena, no matter their age – they are both 40 – no matter their number of children, or the fact that neither live in California, still reign supreme.
Gibb laughed when asked if this was the best he’s ever seen Dalhausser play. Gibb has seen Dalhausser at every stage of the 2.06m blocker’s career. They were regularly mistaken for one another in the early 2000s, when Gibb and Dalhausser, both tall and lanky, with heads full of hair, made their debuts as the next big blockers in the U.S.
“People were asking if I saw my lookalike,” Gibb said, recalling the first time they played one another, in Austin, Texas, in 2004. “I’ve been dealing with that for 15 years.”
For 15 years, he has competed with Dalhausser for the title of best American blocker. He paused before answering Blanton’s question, his mind perhaps wading through those 15 years and 100 Dalhausser victories, wondering if this 2020 version of the Thin Beast really is the best of them all.
Nah. Gibb couldn’t take the bait.
Couldn’t look past 2008-2010, when Dalhausser and Todd Rogers went on a run that many thought might never happen again, until some Norwegian kids named Anders Mol and Christian Sorum did something remarkably similar the past three seasons.
In that three-year stretch, Dalhausser and Rogers won 15 of 25 FIVBs and 20 of 36 AVPs. Dalhausser was named the best offensive player and best hitter on the FIVB all three years, the best blocker and best setter in two, the team of the year in 2010. He won an Olympic gold medal in 2008 and most outstanding player on the planet in 2010.
“He’s playing great,” Gibb said. “It’s hard to argue from 08, 09 season. That Phil was, in my opinion, the best volleyball I’ve ever seen in my life, the most dominant I’ve ever seen in my life. He’s not far away from that now. He’s playing really, really well.”
It’s not just Dalhausser, either. Their dominance in Long Beach was every bit thanks to Lucena, too. Bourne, who lost two straight weeks to Lucena and Dalhausser in the Monster Hydro Cup and the Wilson Cup but avenged them with a win in the finals of the Porsche Cup, said it’s some of the best volleyball he’s seen Lucena play.
“It’s so confusing,” Bourne said. “The old guys are the ones who are supposed to be struggling. Nick comes out in the best shape of his life. Phil turns the clock back 10 years. What is going on here?”
The same question could be asked of the women, too. So many of the storylines in the United States have been, justifiably, on the youth movement in beach volleyball. The talent on the women’s side in America continues to get younger and younger, as players out of the college ranks – Sara Hughes, Sarah Sponcil, Kelly Claes, Kelley Kolinske, Betsi Flint – in their early- to mid-20s make Olympic pushes.
No matter.
April Ross and Alix Klineman, neither of whom were able to compete in collegiate beach volleyball, fended off every single one of them.
Three straight weeks, they played a different team in the finals of the AVP series. Three straight weeks, they won, beating Hughes and Brandie Wilkerson, Melissa Humana-Paredes and Sarah Pavan, and Sponcil and Claes. They went a perfect 12-0, losing just three sets over the course of the series.
“We haven’t competed in a long time,” Ross, 38, said during the opening Monster Hydro Cup. “We’re just trying to get back in a groove, in a routine. I think we started to find our true style of play and we started to roll with it.” 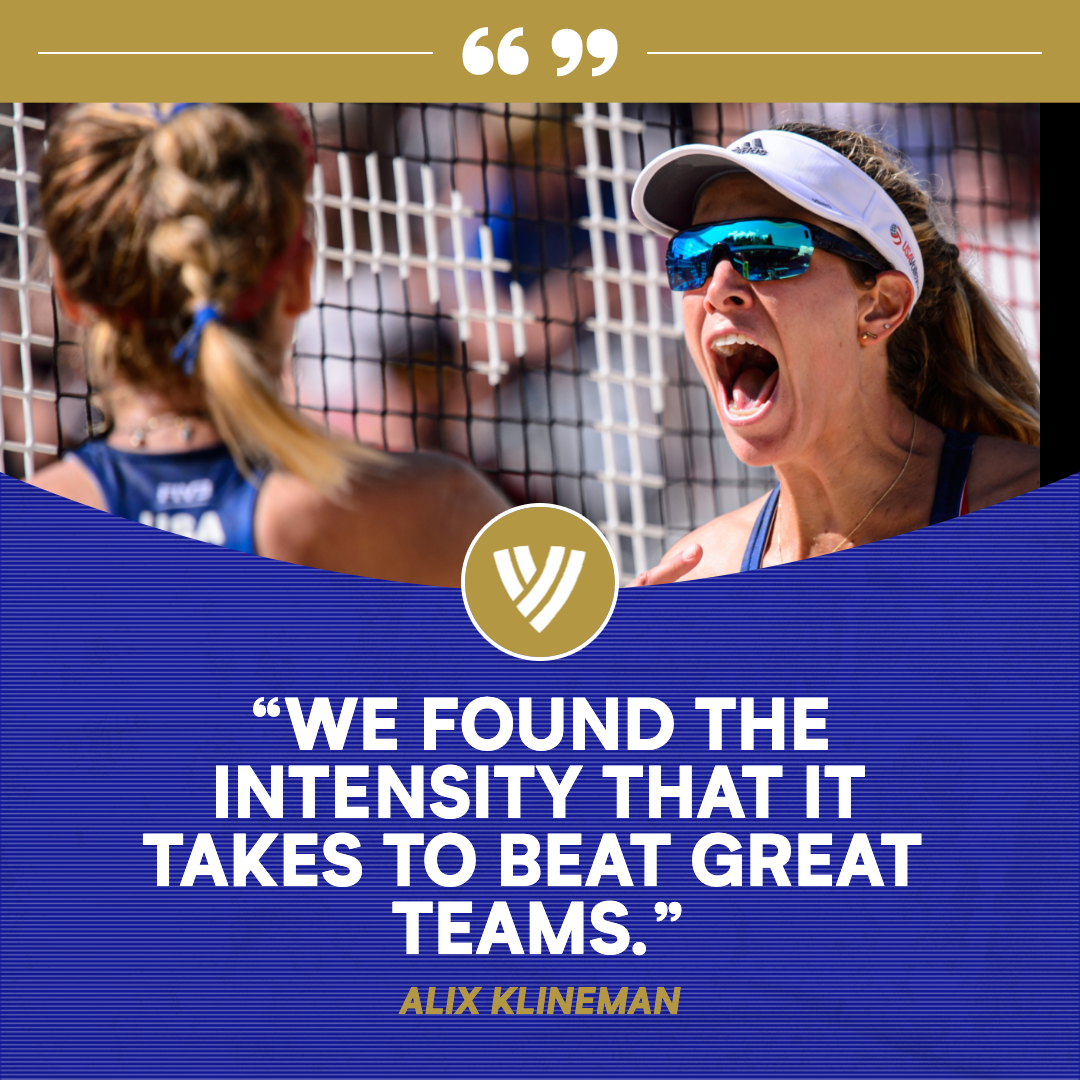 They rolled, all right. They rolled through every type of team the United States could throw at them. They rolled through the new and exciting - Traci Callahan and Crissy Jones – the established powers – 2019 World Champs Humana-Paredes and Pavan – the international mishmashes – Hughes and Wilkerson – the college standouts – Corinne Quiggle and Allie Wheeler – the Olympic rivals – Claes and Sponcil, Emily Stockman and Kolinske – and the experienced veterans – Emily Day and Lauren Fendrick.
“We found the intensity that it takes to beat great teams like [Sponcil and Claes],” Klineman said after a three-set win over the youngsters in the Wilson Cup. “We finally turned it on.”