Dalhausser looking ahead to Olympics

Orlando, United States, May 6, 2020 – Phil Dalhausser knows a thing or two about beach volleyball at the Olympic Games. A gold medallist at the Beijing 2008 Games, the American blocker also competed at London 2012 and Rio 2016 and is currently aiming to qualify for the Tokyo Olympics.

Orlando, United States, May 6, 2020 – Phil Dalhausser knows a thing or two about beach volleyball at the Olympic Games. A gold medallist at the Beijing 2008 Games, the American blocker also competed at London 2012 and Rio 2016 and is currently aiming to qualify for the Tokyo Olympics.
Dalhausser, who turned 40 earlier this year, won gold in Beijing with former partner Todd Rogers, with whom he finished ninth four years later in London. He joined forces with longtime friend Nick Lucena in 2015 and the duo made a push to the quarterfinals in Rio, where they were ousted by eventual champions Alison Cerutti and Bruno Schmidt of Brazil. 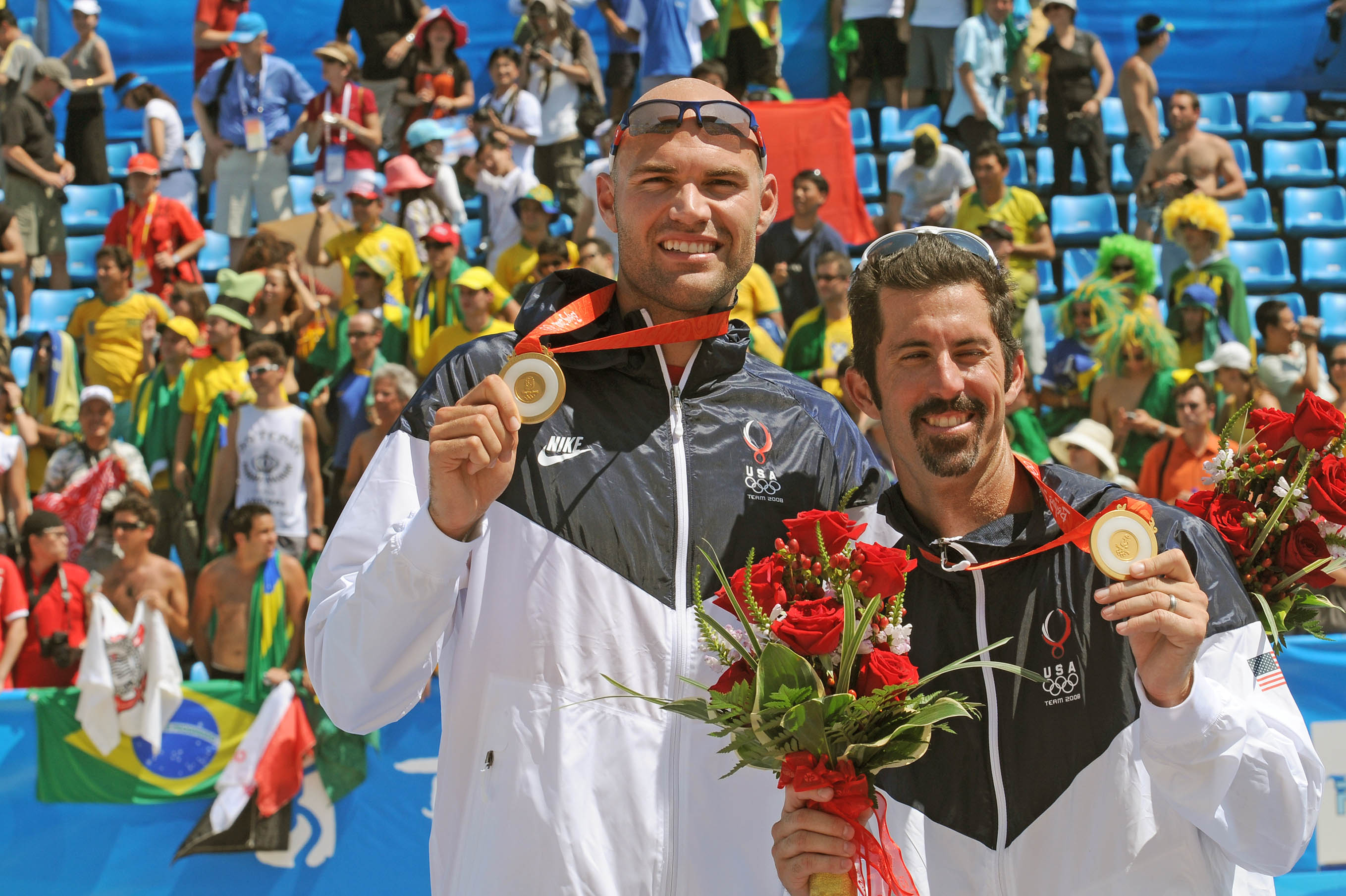 Dalhausser (left) and former partner Rogers took gold at the Beijing Olympics
One of the most experienced teams competing on the FIVB Beach Volleyball World Tour, Dalhausser and Lucena have won nine gold medals at the international level together. They are confident they still have what it takes to top the podium in Tokyo in the summer of 2021, but they believe it will be harder than ever to succeed.
“I definitely think we can win gold,” Dalhausser said during an online meeting with former American volleyball players Kevin Wong and Chris Marlowe. “But it will be harder than the last three Olympics I’ve been a part of just because the depth on the men’s side is just crazy. Norway and Russia are dominating in such a strong way, but there are so many good teams out there. But I think it’s something we can do, for sure.”
Dalhausser and Lucena, who is also 40, are feeling the competitive level of the World Tour as they try to qualify for Tokyo. The Americans are currently ranked below fellow USA teams Jake Gibb/Taylor Crabb and Tri Bourne/Trevor Crabb in the Provisional Olympic ranking.
With the postponement of the Games to 2021, one thing the veterans are trying to do is improve their fitness levels so they can be at their best when competition resumes, even if they live four hours apart in Florida.
“Father-time is not on our side because Nick and I are both 40 and that adds another year to us,” Dalhausser, who’s nicknamed ‘The Thin Beast’, said. “But we both have full gyms in the garage, so we’re both lifting and doing cardio. We’ll be stronger and hopefully in better shape and that could be an advantage for us.”
One thing that will certainly be an advantage to the veterans is the way they approach major challenges at this point in their careers. Experience brings a certain degree of serenity as they put in place their bid to contend for a medal.

Dalhausser, who has amassed 97 tournament victories in his career including on the World Tour and the American AVP, explained how his mindset in the sport has shifted with time spent on the sand.
“Ten years ago I probably thought all of that was really cool,” he said about keeping track of his own records. “Every time I won a tournament I’d look at the list and check if I was catching up with whoever was at the top, but now I don’t really care that much. Of course I’m nearing 100 tournament wins and that would be nice to have, but I know that even though the main goal is to win a medal in Tokyo, life won’t be over if we don’t.”
More beach volleyball from the United States:
Playing and singing team Slaes, aka Claes and Sponcil
173 foreign players competing on American beach volleyball collegiate scene
Ross and Klineman named USA's top side
Gibb adds another title to his collection
Quick links:
Olympic Games Tokyo 2020
FIVB Beach Volleyball World Tour
Facebook
Twitter
Instagram
Youtube
This website uses cookies to ensure you get the best experience on our website. For more information please read our Cookies Policy.
Ok