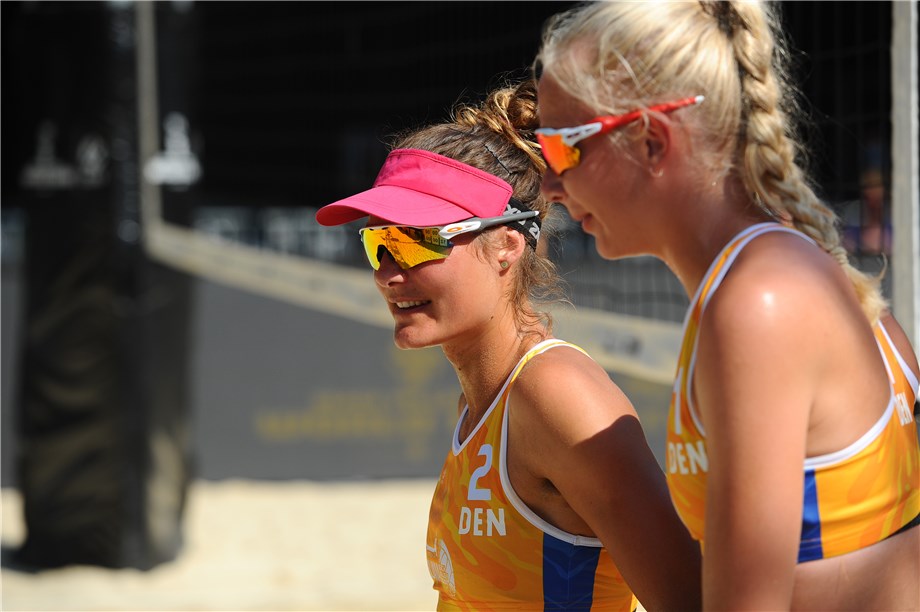 Clara Windeleff (left) and Line Trans are into the Ljubljana semifinals 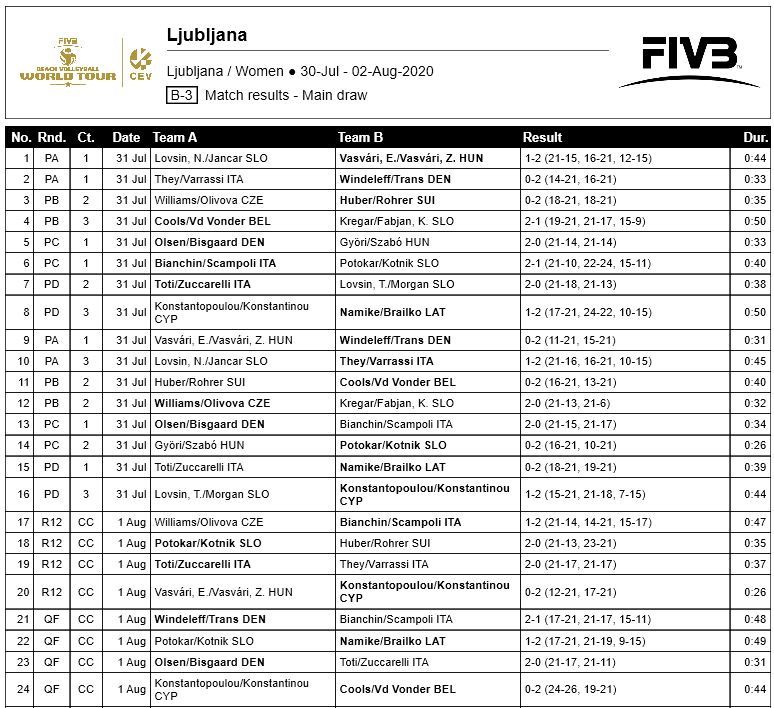 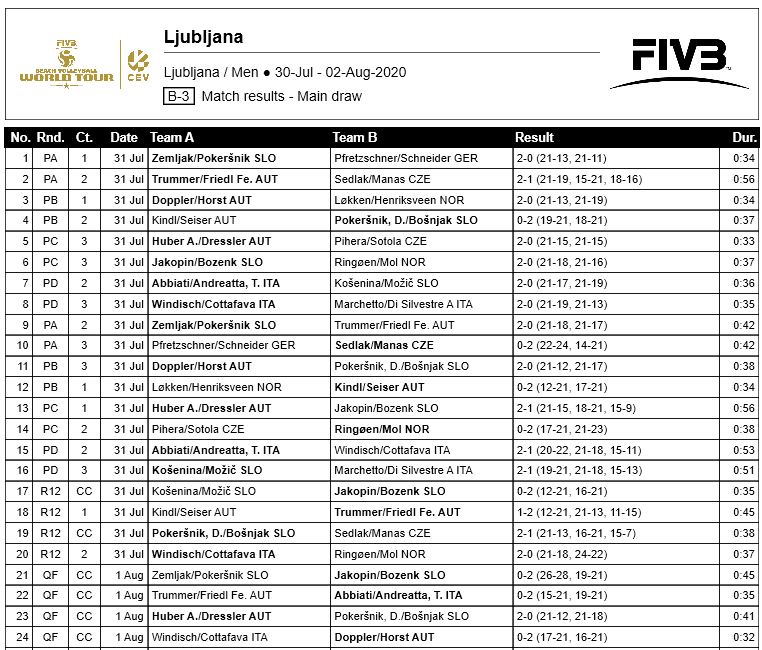 There remain hopes of a home win in the men’s competition, but all the Slovenian women’s team exited the tournament.
Denmark’s Clara Windeleff and Line Trans beat Italy’s Margherita Bianchin and Claudia Scampoli 2-1 (17-21, 21-17, 15-11), and they were joined in the last four by compatriots Cecilie Olsen and Sofia Bisgaard who defeated Giulia Toti and Agata Zuccarelli 2-0 (21-17, 21-11).
“This was definitely one of our best matches so far on this tournament,” Bisgaard said. “It was great and playing on the centre court was amazing.
“Now, we will watch our next opponents, prepare the game strategy and then hope for the best.”
Latvia’s Anete Namike and Varvara Brailko ended the hopes of a home win by defeating Monika Potokar and Tjasa Kotnik, the last remaining Slovenia team, 2-1 (21-17, 19-21, 15-9).
Belgium’s Sarah Cools and Lisa Van Den Vonder were pushed hard by Cyprus’ Zoi Konstantopoulou and Manolina Konstantinou but held their form to complete the semifinal line-up with 2-0 (26-24, 21-19) victory.
Quick links:
FIVB Beach Volleyball World Tour - Ljubljana
Olympic Games Tokyo 2020
Facebook
Twitter
Instagram
Youtube
In the men’s draw Austria’s Alexander Huber and Christoph Dressler stopped Črt Bošnjak and Danijel Pokeršnik’s run with a 2-0 (21-12, 21-18) win, while their compatriots Clemens Doppler and Alexander Horst outplayed Italy’s Jakob Windisch and Samuele Cottafava to win 2-0 (21-17, 21-16).
“It was a good game,” Horst said. “I think we played really solid as we did not make a lot of mistakes. The Italians are young, and they have a bright future, but today we were better, so we deserved this win.”
Italy’s Andrea Abbiati and Tiziano Andreatta stopped Austria’s hopes of three teams reaching the semifinals when they defeated Austria’s Maximilian Trummer and Felix Friedl 2-0 (15-21 and 19-21).
Slovenia’s Vid Jakopin and Tadej Boženk beat their countrymen Nejc Zemljak and Jan Pokeršnik 2-0 (26-24, 21-18) to keep the hopes of a home triumph alive.
“It is always challenging to play against Nejc and Jan,” Boženk said. “Their fighting spirit is high, regardless of the fact that we are friends since childhood.
“We just wanted not to lose without a fight and do our best, but at the end we were able to progress to the next round.” 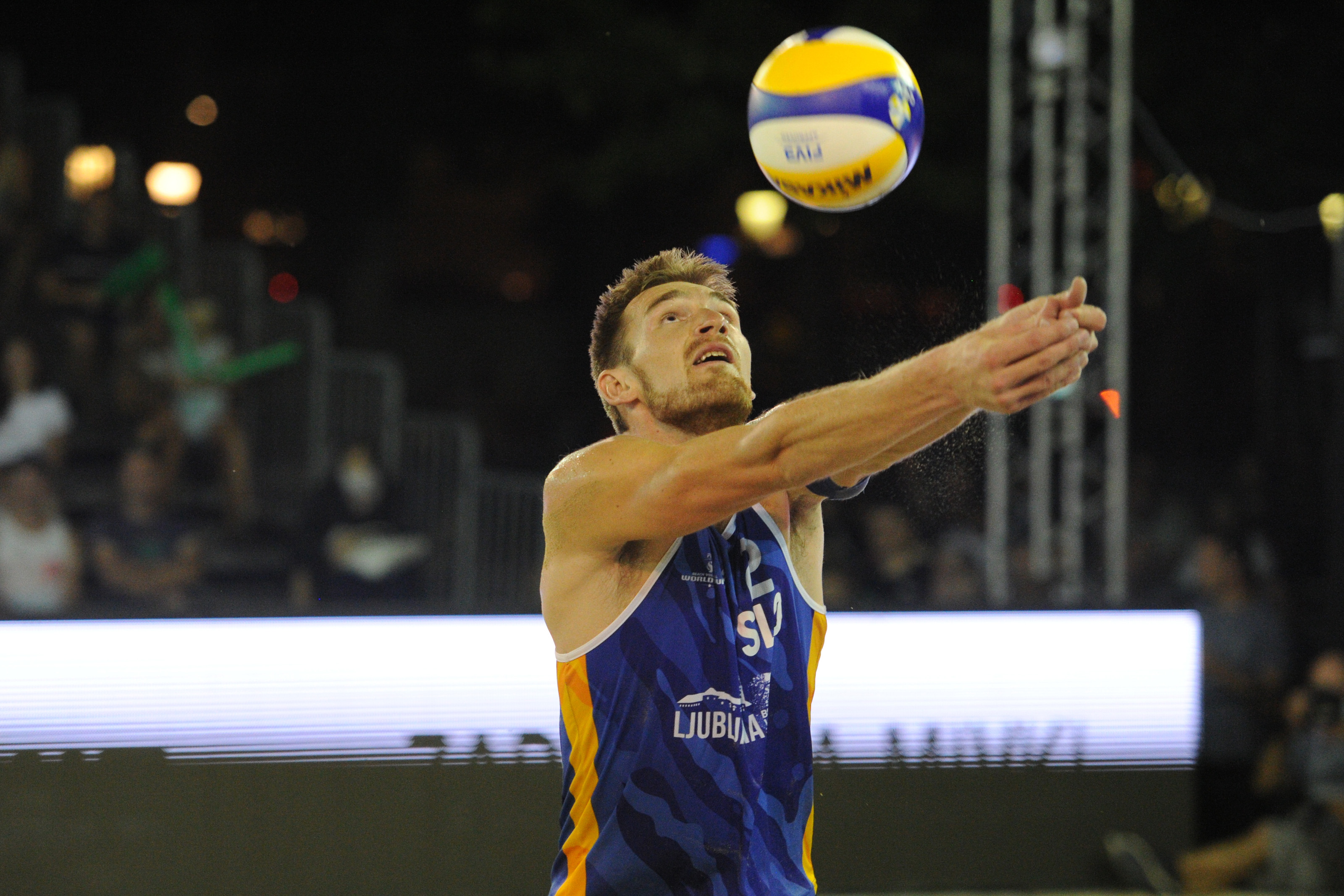