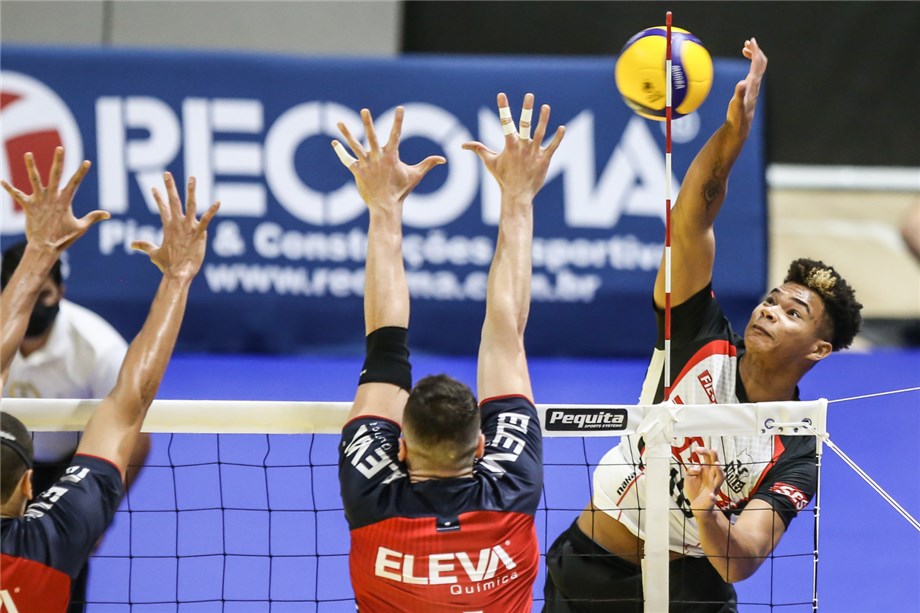 Darlan in action during the Trofeu Volei Brasil at the start of the season (Photo: Wander Roberto/Inovafoto/CBV).

Sao Paulo, Brazil, November 18, 2020 – Brazil’s SESI knew they had a big gap to fill in their roster ahead of the 2020-2021 club season after the departure of star opposite Alan Souza to Sada Cruzeiro Volei, but they knew exactly where to look.
After the 2019 FIVB Volleyball World Cup Most Valuable Player confirmed his move to Sada Cruzeiro, SESI announced they would be fielding a younger team in this season’s Superliga, mostly formed of players coming from their youth and junior teams, and that meant Alan’s younger brother, 18-year-old Darlan, would be handed the starting spot at the opposite position.
“It’s been an extraordinary experience so far,” Darlan told Volleyball World. “I didn’t expect to have such a great opportunity so early in my career, but SESI decided to have a younger roster this season and it opened the doors for me and I’m super excited to be playing for one of the best teams in the country. I’ve had some ups and downs in the first few matches and I’m working to be more consistent so I can help the team more.”
Darlan is being modest, to say the least. After four matches played, the 18-year-old opposite is currently the top scorer of the Superliga with 67 points.
The 1.92m-tall opposite ranks ahead of several storied veterans, including his brother Alan (64), former Brazil national team member Renan Buiatti (58), 2010 FIVB Volleyball World Championship gold medallist Leandro Vissotto (54) and Rio 2016 Olympic champion Lucas Saatkamp (45).
At SESI, Darlan, who was the Most Valuable Player of the U19 South American Championship in 2018 and was part of the Brazilian roster that finished ninth at the same age-group World Championship in the following year, has the luxury of being coached by one of the best ever in his position, Barcelona 1992 Olympic champion Marcelo Negrao.
“He’s a beast,” Negrao said in a recent edition of the ‘Jornada das Estrelas’ podcast. “In a certain way, he reminds me a lot of (former Cuban opposite) Joel Despaigne. He’s not super tall, but has a tremendous reach and his power, either when serving or hitting, certainly doesn’t look like he’s just 18. Like many other players in our roster, he has a great opportunity to grow this year.” 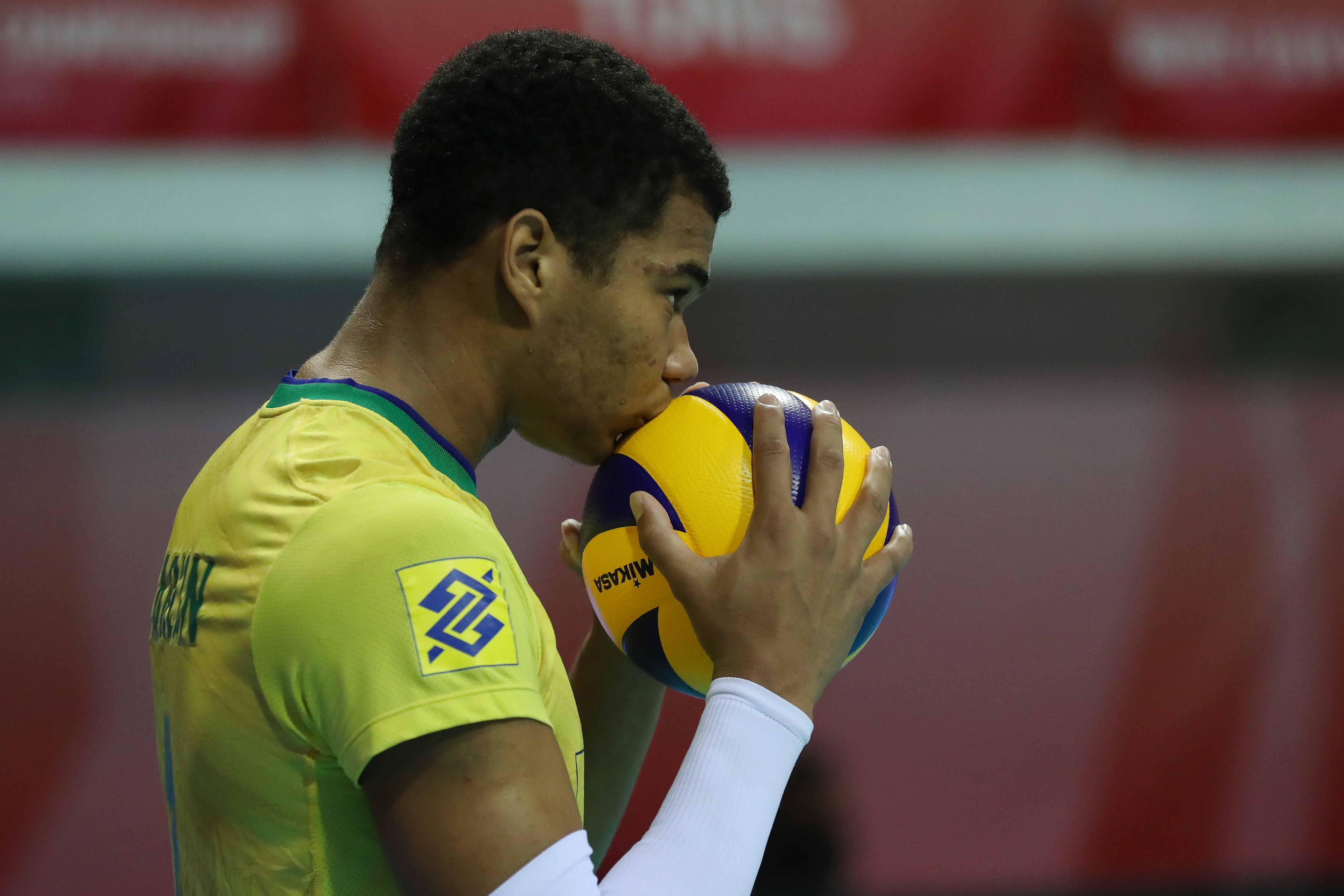 Darlan during the 2019 FIVB Volleyball U19 World Championship.
Darlan credits most of the progress he has made so far to Alan, his brother. From first watching his sibling play the game ten years ago and falling in love with it, and deciding to pursue the same path, to moving into his apartment in Sao Paulo when they were teammates at SESI last season, the young opposite believes he wouldn’t be where he is right now without the support of the 26-year-old Alan.
“I can’t find the words to describe how important he is in my career,” Darlan reflected. “I first started playing because of him and I just wanted to be like him, both as a player and a person. He always incentivized me and last year, when he was at SESI and we practised together for part of the season, he would give me feedback all the time and explain things to me a hundred times if necessary. Wallace (Souza) and him are the two players I watch the most. We haven’t been talking as much now that he’s at a different club, but he’s always there to help when I need him.”
Because of that, the Superliga matchup between SESI and Sada Cruzeiro, scheduled for November 28, will carry a special meaning for the young Darlan.
“We have only played against each other in practice, never in matches,” Darlan added. “I don’t know how it’s going to be when it happens, but all I hope is that it’s a great game and that people have fun with two brothers playing good volleyball against each other.”
More volleyball from Brazil:
Lazo in great form as Minas win Brazilian Superliga derby
International stars lead the way in Praia's Supercup triumph
Brazilian women's Superliga preview
Olympic champion Mari back in the game
Baby on the way for Brazilian star Fabiana
Garay on fire as Praia open season account
Mauricio Souza leads Taubate to Supercup triumph
Bruno secures first title with new club Taubate
Minas complete comeback to claim state title
Tandara carries Osasco to 15th Paulista trophy
SESC win first title in new era
Quick links:
FIVB.com - Volleyball
Facebook
Twitter
Instagram
Youtube