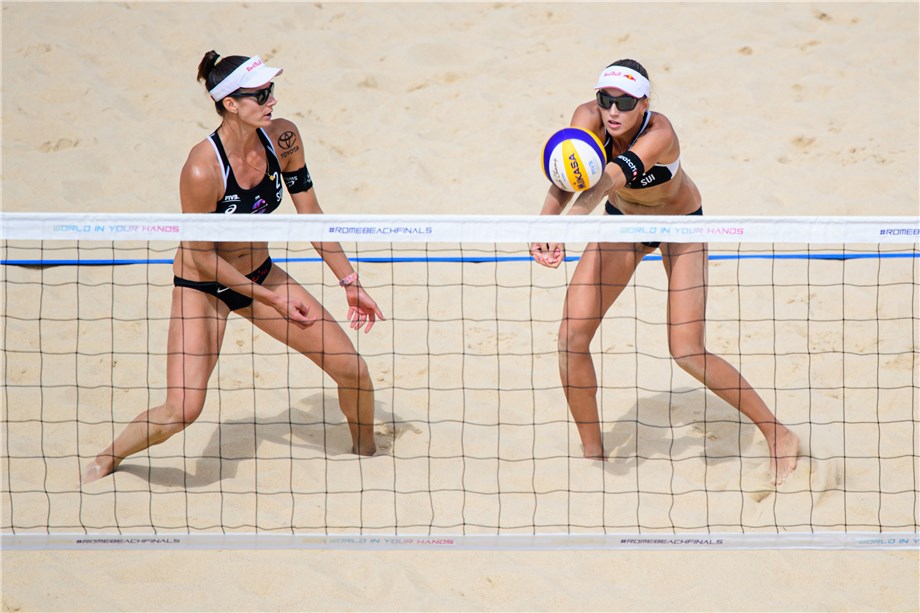 A successful season finish for Switzerland's Anouk Verge-Depre (right) and Joana Heidrich as the pair advanced to the semifinals of the FIVB World Tour Finals on Saturday with a win over a Spanish pair at the Foro Italico in Rome.

Rome, Italy, September 7, 2019 - It was a match that could have defined an entire season for Joana Heidrich and Anouk Verge-Depre.

Quick links - Beach volleyball:
FIVB Beach Volleyball World Tour Finals - Rome
Facebook
Twitter
Instagram
YouTube
With a semifinal spot in the FIVB World Tour Finals on the line, the Swiss pair took to the court against Spain’s Elsa Baquerizo and Liliana Fernandez.
It seemed like mere seconds after the first serve and Elsa and Lili had a 4-0 lead and Joana and Anouk called a timeout and headed over to talk things over in the players’ chairs.
Through 10 tournaments in the first seven months of 2019, Anouk and Joana could finish no higher than ninth place. Four times they finished 17th, and twice they took a 25th.
Can’t get a slower start for a team with Olympic aspirations. In fact, both players went to the Rio 2016 Olympics with separate partners until Joana’s partner (Nadine Zumkehr) and Anouk’s partner (Isabelle Forrer) retired.
This year, they were coming off three consecutive 17th-place finishes before heading to Russia to participate in the European Championships and the FIVB World Tour’s Moscow stop.
“We became a little more patient with ourselves,” Anouk said. “We have some rituals to stay calm even though we maybe don’t score the point. Just keep on going, keep on pushing, everybody for themselves but also together as a team and I think that’s a strength right now.
“At the beginning of the season we lost close ones and the self-confidence was not there.”
They reached the bronze medal match at the European Championships and fell to Elsa and Lili (21-19 in the tiebreaker).
Staying in Moscow with some newfound confidence, they captured the Moscow FIVB tournament, defeating Brazil’s Taiana Lima and Talita Antunes in the final. It was their first gold medal victory as a team.
So, a 4-0 deficit in the World Tour Finals quarterfinals? No problem, even if they dropped the first set. They steadied their game and advanced to the semifinals of the 5-star event.
“It was like from the beginning we were four points behind,” Joana said. “After the first set, it was ‘Now what are we going to do against them and what are we going to do on our side of the net?’ And we got our game back.
“We know we can beat this team and we know it’s going to be a tough game because we know each other really well. But I had the feeling it was our day.”
The 2-1 (17-21, 21-13, 15-10) victory got them into the final four and gave them a chance to get on the podium in the final major tournament of the season.
“Amazing, especially at the end of the season, everything is a little slower with the body,” Anouk said. “We’re really happy here in Rome in this great atmosphere, the venue is incredible, and we have to go for two more games.”
It’s a chance they didn’t have for the majority of the season.