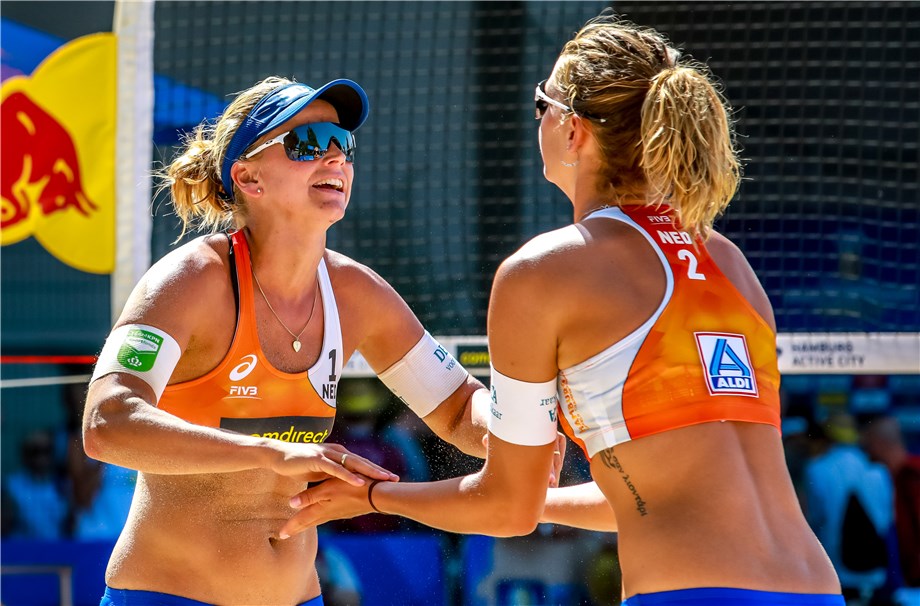 Hamburg, Germany, June 30, 2019 - Two women's teams from the Netherlands powered their way to the top spots in their pools here Sunday at the $1-million FIVB Beach Volleyball World Championships presented by comdirect & ALDI Nord after posting late morning wins over pairs from Australia.
Quick links - Beach volleyball:
FIVB Beach Volleyball World Championships Hamburg 2019
FIVB.com - Beach volleyball
Facebook
Twitter
Instagram
For the second time in three days, 31st-seeded Joy Stubbe and Marleen van Iersel of the Netherlands posted a seed-break-through win in Pool G by scoring a 2-0 (21-19, 24-22) victory in 40 minutes over seventh-seeded Mariafe Artacho and Taliqua Clancy of Australia.
It was the first FIVB World Tour meeting between the two teams as Artacho and Clancy are the second-ranked women's pair on the international beach volleyball circuit and entered the World Championships after winning a gold medal two weeks ago in Warsaw, Poland.
Following the first Dutch win Sunday on Am Rothenbaum Stadium court No. 2, reigning European champions Sanne Keizer and Madelein Meppelink gained their second Pool H victory for the Netherlands with a 2-0 (21-16, 21-12) victory in 29 minutes over 32nd-seeded Nicole Laird and Becchara Palmer of Australia. 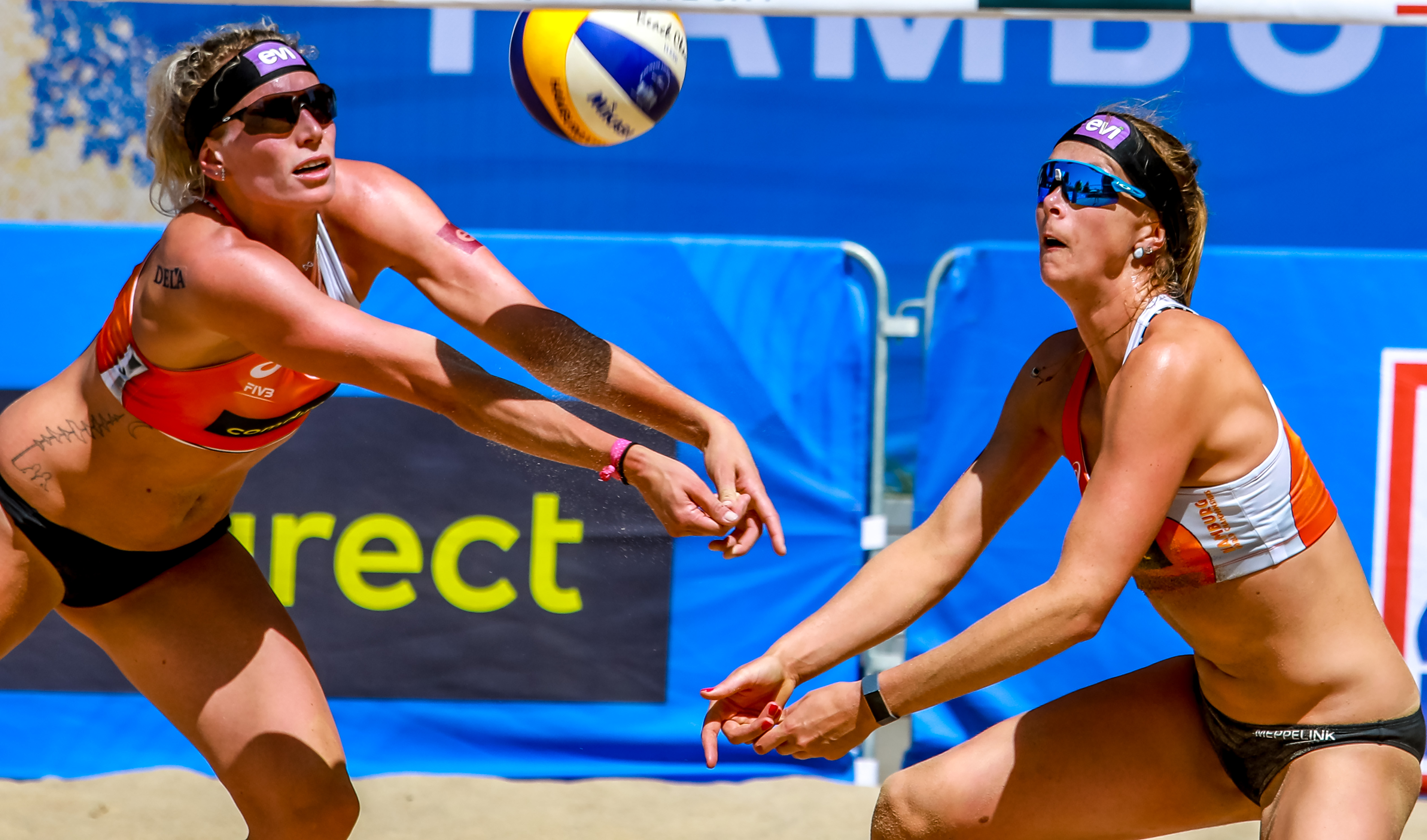 Reaching for the Mikasa is Sanne Keizer (left) ans Dutch partner Madelein Meppelink following the action
Stubbe and van Iersel now control Pool G as the Dutch have defeated the two teams seeded higher in the group after opening with a three-set win Friday over 18th-seeded Brooke Sweat and Kerri Walsh Jennings of the United States. Stubbe and van Iersel conclude pool play Monday against 42nd-seeded Maita Cousin/Letendrie Nathalie Marie of Mauritius, who are 0-2 in the competition.
Keizer and Meppelink will play another unbeaten team for the Pool H title on Monday against 17th-seeded Nina Betschart and Tanja Huberli of Switzerland. The Swiss have won both FIVB World Tour matches with Keizer and Meppelink, but the Dutch prevailed over Betschart and Huberli last July in the finals of the European Championships on home sand in The Hague.
“Beforehand, we made a really good tactical plan on them," said van Iersel after the match with the Australians. "In the end we really stuck to that, especially the end of the second set. It was serving with a lot of pressure that got them in trouble."
Winning their group was van Iersel's plan. “We knew it was a tough pool and we knew we had to work hard and we’re very happy that paid off. We’re really taking this step by step and then we’ll see where that leads us."
Clancy said she wasn't "strong in that moment. I felt like I was holding back just a little bit. But going through the experience now I think I’m going to be better for it, so I’ll move forward from there. It’s just on our side of the net and playing those tough moments and not being as hesitant as we were today. We’ll learn and build from it, too. Our next match is on centre court and we absolutely love the centre court here in Hamburg. I’m sure that will give us the extra push and buzz.”
Artacho said when the match was tied at the end of the second set: "We created opportunities, we got the dig and sometimes I had the opportunity to finish and I didn’t and that’s when they grabbed the point. Those are the points you want to close off to put the pressure on them instead of maybe on us. Those are things when it’s that close you have to be stronger."
Meppelink credited her coaches and staff. "We had a good game plan and it went the way we wanted. We had a lot of serve pressure on them, a lot of mistakes as well but that was part of the plan. I think we can do better still. Some of our passes were high and it made it harder with this wind to set. We definitely can work on that but with the tools we brought out today we played well."
Keizer said: "We have a big team around us, and everybody did a good job. Our plan worked, we executed everything very well but also stayed very focused and I’m very proud of our team. It’s exciting, I’m really looking forward to playing. It’s exactly the European final and it’s against a very good team so we’re going to work hard and harder. I think they’ve already had revenge (Moscow 2018) but not here, this is my place.”
As one of the more experienced players on the World Tour, Keizer's note concerned Betschart and Huberli's victory over the Dutch three weeks after the 2018 European Championships when the Swiss scored a two-set elimination victory.
The women's portion of the FIVB World Championships continues through this coming Saturday when the medal matches will be played on the Am Rothenbaum Stadium centre court with the gold medal team sharing the $60,000 first-place prize. The men's finale is the next day to conclude the 12th edition of the FIVB World Championships.