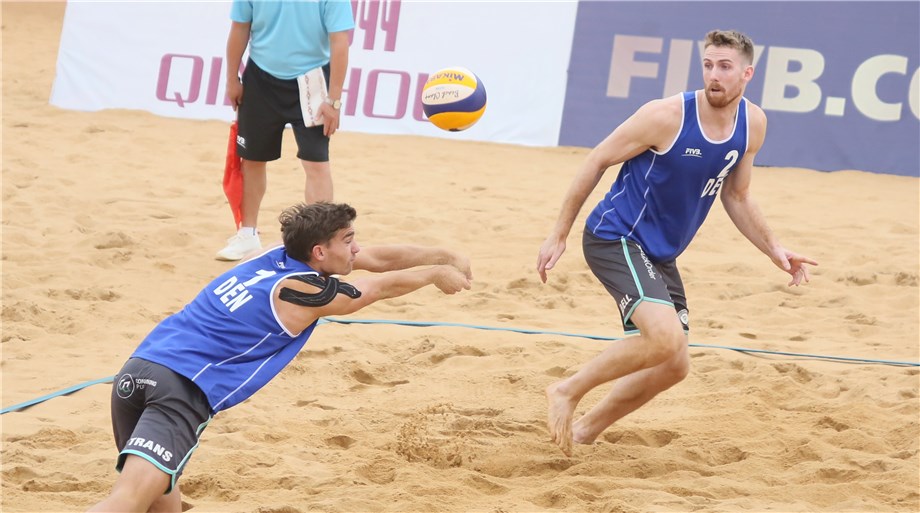 Qinzhou, China, November 1, 2019 – Martin Trans Hansen and Kristoffer Abell are engaged and invested in a dream project that would someday count Denmark as one of the top beach volleyball countries in the world.

“We actually just started a new project, similar to the model they have in Norway, where they gathered a group of good players that train as a team,” Abell said. “We are doing a similar thing in Denmark and we found six players when you are just focusing on pairs. So far it has worked really well as we are practicing at a much higher level. Our performance so far has been the result of that.”

The two Danes has outlined their aspirations in the game and want to add the World Tour to their future conquests. With World Tour medals on the horizon, Trans and Abell are getting into the right mindset.

“We have six guys and we have a high ambition to play in the World Tour,” Trans said. “We all know that we have to play at our highest and train at our best. This motivates us in practice to do our best and it keeps pushing us to higher standards.”

Quick links - Beach volleyball:
FIVB Beach Volleyball World Tour – Qinzhou
FIVB.com - Beach Volleyball
Latest Videos
Facebook
Twitter
Instagram
They are likewise grateful that they get to train in a good facility in their country that prepare them in facing bigger, better opponents from other countries.

“In the summertime, we can play outdoors and we have a good facility for that, but as soon as we enter September then we play at an indoor facility. So we’ve got the best of it during winter and we are lucky we can come to countries like China and Mexico, where they practice the sport outdoors.”

The pair entered the Qinzhou 3-star from qualification and has now reached the round of 16 to face Swiss pair Marco Krattiger and Florian Breer.

“When we got here, we’ve surpassed our expectations. We started in the qualification and now we play in the round of 16. That’s very big for us and for Denmark at a 3-star tournament,” Abell said.

“Also coming here from our indoor facility in Denmark, it’s a difficult transition, so we are feeling that our level has improved day by day because we are getting more used to the heat, wind and sun. Now we have a chance against Switzerland. So far we are happy with what we’ve done here.”