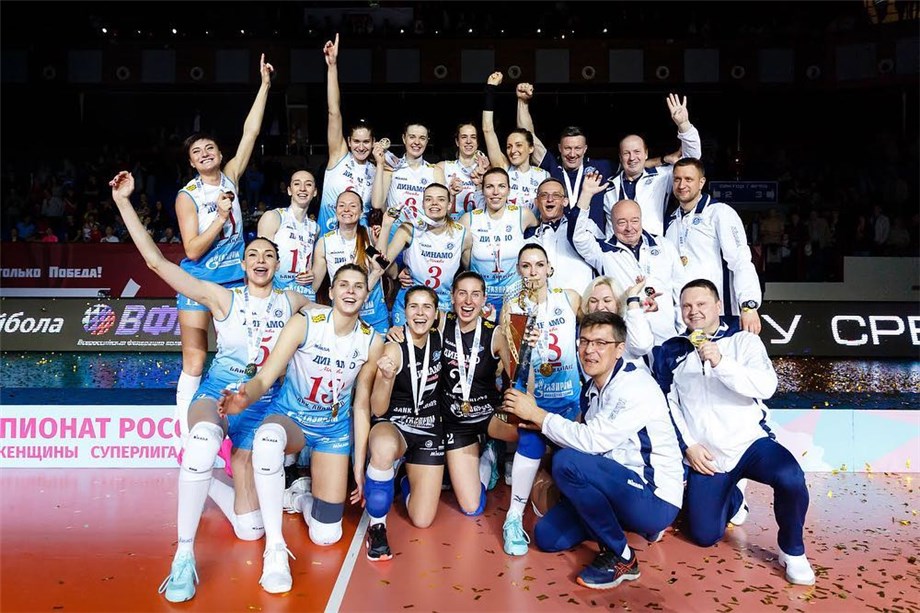 Lausanne, Switzerland, May 1, 2019 - Dinamo Moscow swept Lokomotiv Kaliningrad 3-0 (25-21, 26-24, 25-21) on Tuesday evening on the road to wrapping up the best-of-five final series of the Russian Women's Superleague after only three matches and claiming the national title for the fourth time running and seventh overall.

It was once again Nataliya Goncharova who powered Dinamo, scoring 23 points and attacking for 53% (21/40). Irina Fetisova was the only other Dinamo player to reach double digits, with 11, of which four were blocks.

Top scorer of the game, however, was Irina Voronkova who brought in 25 points for newcomers to the Superleague Lokomotiv.

"It was a very busy and challenging season with a lot of games," said Dinamo head coach Aleksandr Sukomel after the match. We are happy with the season! We won the Cup, won the Supercup, and now won the Russian Championship!"

Leading Dinamo players Goncharova, Fetisova and Ekaterina Efimova have been selected as part of Russia's extended roster for the 2019 Volleyball Nations League. They will be joined by Lokomotiv's Voronkova - Dinamo's Maja Ognjenovic will captain world champions Serbia. Click here to view the VNL team pages.