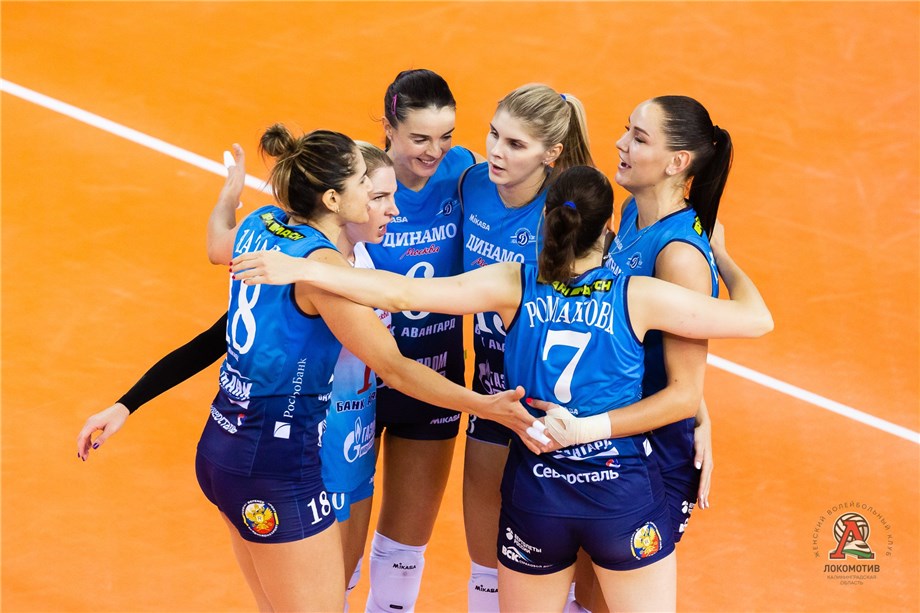 Moscow, Russia, September 16, 2020 – Dinamo Moscow and Tulitsa Tula remained the only two unbeaten teams in the competition as the first stage of the women’s 2020 Russia Cup took place at four venues over six days and determined the 12 participants still in contention for the prestigious trophy.
The 22 competing teams were split into four geographically based round-robin pools.
Four-time Russia Cup winners Dinamo Moscow travelled to Kaliningrad for the games in Zone 1, where they defeated all four of their opponents, including hosts Lokomotiv Kaliningrad, national league silver medallists of the last two seasons, by 3-1 (28-30, 25-19, 25-19, 25-19), with a 22-point contribution from top scorer Nataliya Goncharova on the second day of the tournament. Lokomotiv, who finished pool runners-up, as well as third-placed Leningradka Saint Petersburg and fourth-placed Zarechie Odintsovo, advanced to the next stage.
“Overall, the result is good, but we still have what to work on. We can play faster volleyball. We still need to train more. We need to improve the interaction with our new playmaker Tatiana Romanova, who sets faster balls to speed up our attack. She also gives an emotional boost to the whole team,” said 2016 Olympian Yana Shcherban, outside hitter of Dinamo.
Superliga newcomers Tulitsa Tula won Zone 4 in Lipetsk. Among their four victories were the five-set thrillers against the only foreign team in the competition, Minchanka Minsk, and hosts Lipetsk, who finished pool runners-up and also progressed to the last 12.
National champions and defending Russia Cup winners Dinamo-Ak Bars Kazan hosted six-team Zone 3 and topped the final standings despite losing to Proton Saratov in four sets on the second competition day. Also on a 4-1 win-loss record, Proton finished second, while Dinamo Krasnodar booked the third ticket to the second stage.
“Yes, we took the first place. We played well and finished the stage well. We fulfilled a lot of the tasks set by the coaching staff and this was the most important thing at this tournament,” commented Russian international Irina Koroleva, middle blocker of Dinamo-Ak Bars.
Superliga bronze medallists Uralochka-NTMK Ekaterinburg claimed the victory in Zone 2 at home. Having already secured the top of the table after winning their first four games, the hosts lost their last match to clubmates Uralochka-2-UrGEU Ekaterinburg. With three teams finishing on 3-2 records, it was Uralochka-2 and Dinamo-Metar Chelyabinsk that qualified for the second round at the expense of Sakhalin Yuzhno-Sakhalinsk who finished fourth and out of contention.
In the so called semifinal round from October 29 through November 1, the 12 teams will be split into four pools of three with the four winners advancing to the Final Four on December 19 and 20 in Moscow.
The new season in the Russian Superliga is also set to start this weekend, with two games scheduled on Friday, September 18.
More volleyball from Russia:
Player of the Week: Egor Kliuka
Lokomotiv Kaliningrad win Governor’s Cup at home
Russian national team to take on Superliga medallists at Kaliningrad invitational
Irina Koroleva both focused and emotional
Russian 2010 world champs on the move
Player of the Week: Nataliya Goncharova
Finnish libero Kerminen switches clubs in Russia
Russian Superligas set for 2020-2021 season
Zenit Saint Petersburg confirm Egor Kliuka for next season
Kseniia Parubets: We just need a little more patience
2019-2020 Russian Superliga's foreign players - top 10
Antoine Brizard to Zenit SP and more market news from Russia
Poletaev in transfer news from Russia!
Grankin dreams of ending national team career with Tokyo medal
Zaytsev and Krsmanovic off to Kuzbass
...
Quick links:
Olympic Games Tokyo 2020
Facebook
Twitter
Instagram
Youtube