Vienna, Austria, September 6, 2020 - For a player involved in the sport of beach volleyball for three decades, Austrian Clemens Doppler is still actively working today as he celebrates his 40th birthday.

Vienna, Austria, September 6, 2020 - For a player involved in the sport of beach volleyball for three decades, Austrian Clemens Doppler is still actively working today as he celebrates his 40th birthday.
Quick links:
FIVB Beach Volleyball World Tour
Olympic Games Tokyo 2020
Facebook
Twitter
Instagram
Youtube
“I had breakfast with my family,” said Doppler, who first played in an FIVB event in August 1996.  “After saying goodbye to my wife and kids, I drove for two hours to a sports academy for future coaches."
When asked about his first FIVB event, Doppler said “he and four others drove 10 hours in a small car from Austria to Belgium. I won my first round match against Hungary. We didn’t manage to qualify in Ostende.  It was raining and cold!”
Doppler cited the 2001 FIVB Beach Volleyball World Championships in Klagenfurt as the event that made “beach volleyball big in Austria. I wasn’t nervous at all playing on the centre court against the German superstars because we had zero pressure. We just enjoyed every second of it. I also remember that I didn’t miss a single party back then.”
In the 2001 worlds, Doppler played two pool play matches with Dietmar Maderbock as the Austrian pair was defeated by two teams that competed in the Sydney 2000 Olympics with their first setback to Jorg Ahmann and Axel Hager of Germany in three sets. Ahmann and Hager captured the bronze medal in Sydney on Bondi Beach.
Only two players - Martin Laciga (239 events) of Switzerland and Jorre Kjemperud (234) of Norway, have played in more recorded beach volleyball events than Doppler (231) among European FIVB competitors. 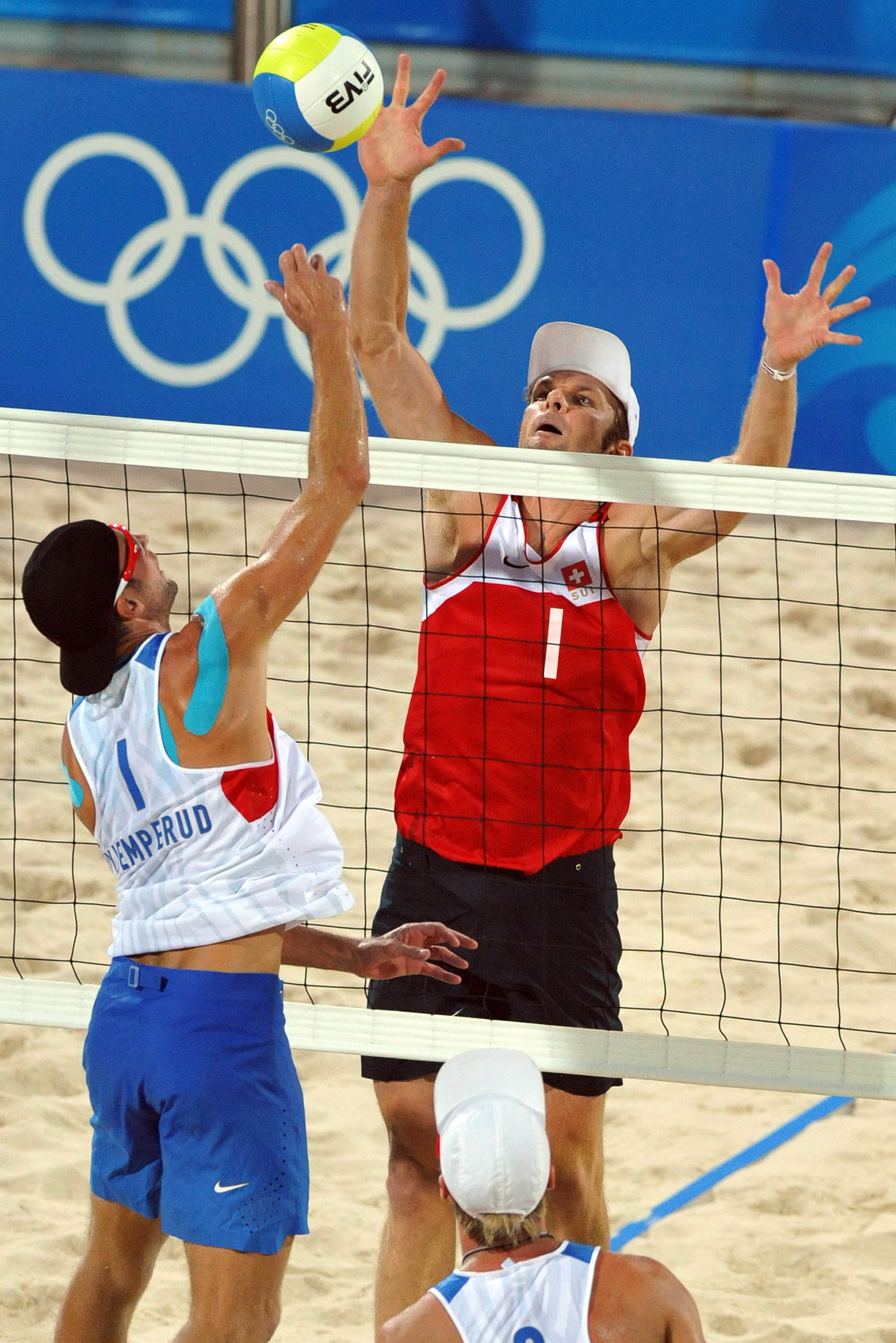 Jorre Kjemperud (left) of Norway against Martin Laciga of Switzerland at the Beijing 2008 Olympic Games.
“That’s just a sign of getting old,” said Doppler. “I started really early. It is too bad that I missed three seasons through injuries. I think I will pass their numbers in the next year or two.
One of the events that Doppler missed was the Athens 2004 Olympic Games where he injured his knee a month before the competition while competing in a post-FIVB qualifying event in France with Nikolas Berger at Marseille.
“That was the worst period ever,” Doppler added.  “I had to watch the games out of the hospital bed. However, I took the good with the bad and managed a good comeback.”
When asked about how satisfying it has been to recover from all his knee surgeries to compete three times in the Summer Games, Doppler said “it’s the dream of every athlete to represent your country at Olympic Games. I was lucky to experience that three times now. That makes me a bit proud.”
With American Jake Gibb is still competing at 44, Doppler said the American “is an absolute role model. He still looks so fresh when he plays! I take every year by year now! As long as I have fun and still win some games, I won’t go anywhere.”
A silver medallist at the at the 2017 FIVB World Championships in Vienna with Alexander Horst, Doppler noted another memorable moment was being “the only team to defeat Alison (Cerutti) and Bruno (Oscar Schmidt) at the Rio 2016 Olympics. That was such a fantastic game and we prevailed in the third set over the team that eventually won the gold medal on Copacabana.” 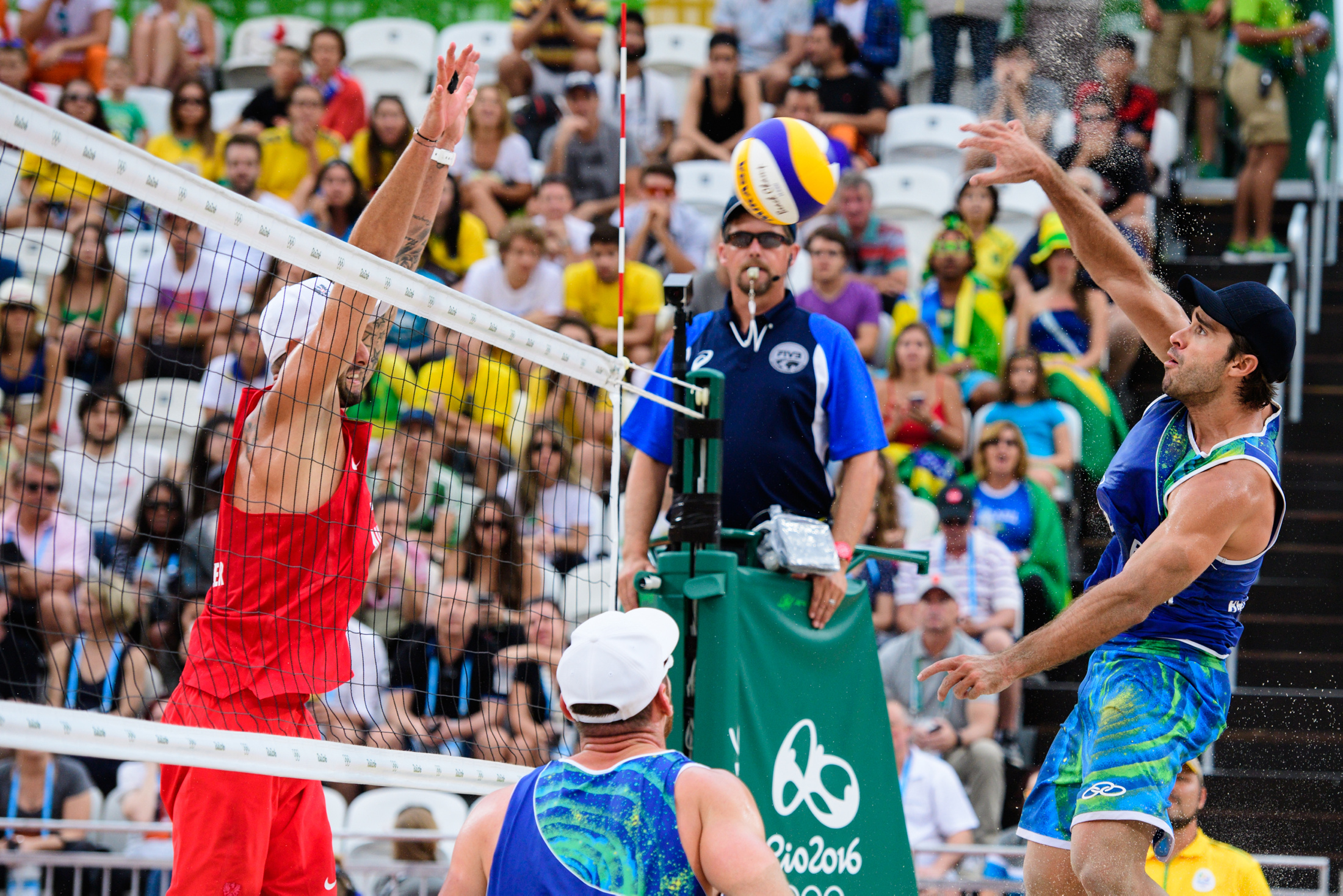 Clemens Doppler (left) of Austria blocking against Bruno Oscar Schmidt of Brazil in the Rio 2016 Olympics.
Doppler added that “winning the gold medal with Peter Gartmayer at the 2007 European Championships 10 months after my second ACL surgery was pretty emotional. And one week after we got kicked out of the pool in the London 2012 Olympics, Alexander and I reached the finals at the grand slam in Poland. That was awesome!”
Outside of playing on home sand in Klagenfurt, Vienna and Baden, Doppler said competing in “Fort Lauderdale in the United States was amazing like Porec in Croatia. Of course, Gstaad is still one of the special places to compete.”
When asked about an podium FIVB teams, Doppler cited pairs from Argentina, Brazil and the United States. The first pair was Jose Loyola and Ricardo Santos from Brazil and Doppler said “I was a big fan of them when I was younger. I played against them only one time with Berger and we won the match in 2002 at Berlin.”
Doppler said Mariano Baracetti and Martin Conde of Argentina, the 2001 world champions from the Klagenfurt event, were “special.  Both of them were small players, but with such a good ball control. I loved to play against them.”
Finally, Doppler added Americans Phil Dalhausser and Todd Rogers to his all-podium list. “Phil is still the best player of the world. Absolutely golden!” said Doppler. 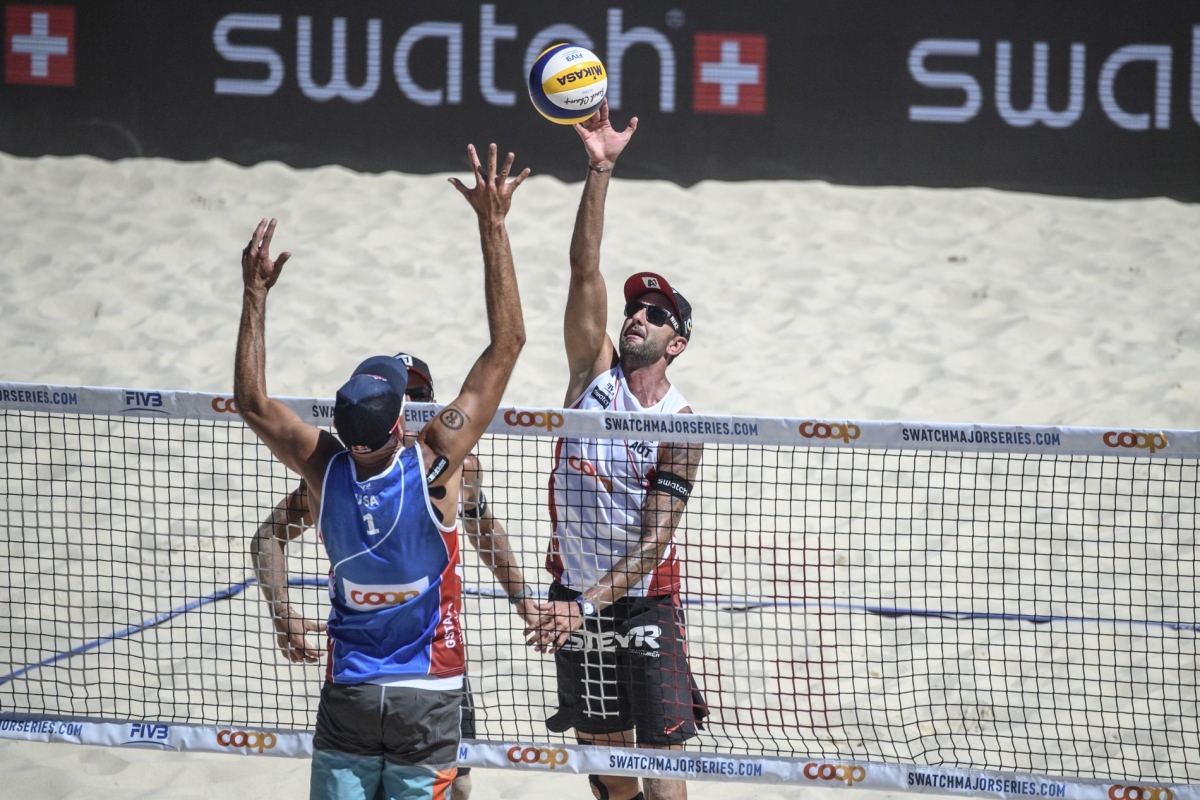 Phil Dalhausser (left) of the United States blocks against Austrian Clemens Doppler at a 2017 FIVB World Tour event in Gstaad, Switzerland.
This website uses cookies to ensure you get the best experience on our website. For more information please read our Cookies Policy.
Ok