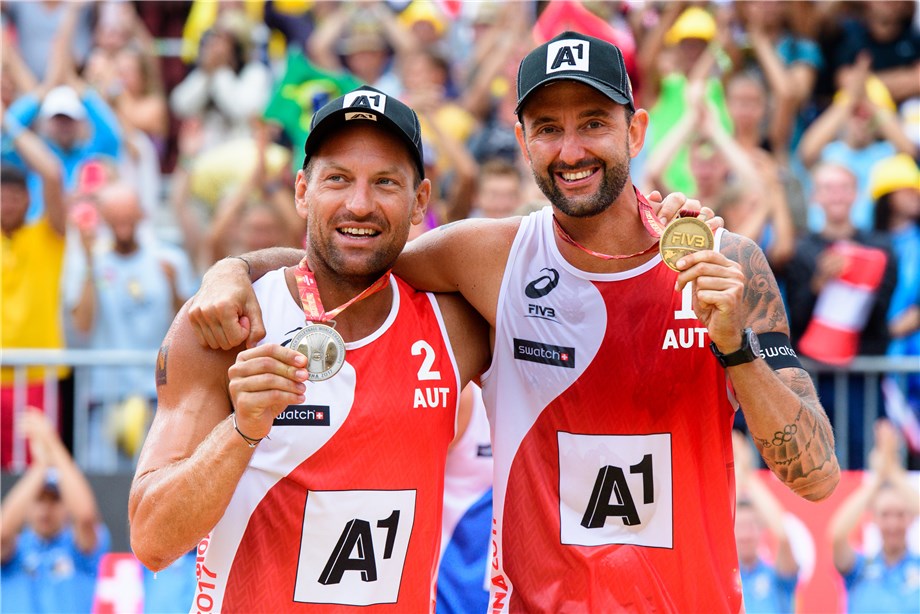 Doha, Qatar, March 13, 2019 – If Germany’s players have any concerns about playing in front of their home crowd at the Hamburg 2019 FIVB Beach Volleyball World Championships then Clemens Doppler is the man to chat to.
Doppler and long-time partner Alexander Horst are currently competing at the Katara Beach Cup in Doha that runs from March 12-16, but it doesn’t take much to swing his mind back to the Austria 2017 FIVB Beach Volleyball World Championships.
Quick links - Beach volleyball:
FIVB Beach Volleyball World Tour - Doha
FIVB.com - Beach volleyball
Facebook
Twitter
Instagram
As Austria’s leading team Doppler and Horst had high hopes going into their home World Championships and they didn’t disappoint by winning silver behind Brazil’s Evandro Goncalves and Andre Stein.
“I get goosebumps thinking about it,” Doppler said. “The memories are still fresh because it was our best tournament. It still hurts that we had the chance to win and didn’t, but the whole ride, the 10 days were just magical. For our sport in Austria it helped it grow. So many kids joined clubs and wanted to start playing volleyball and beach volleyball.
“From the first and second game on we got in this flow. Everybody talks about this flow, but I’d never experienced it. Since then I know what it feels like to ride on the wave. It was such a pleasure to play in such a stadium, packed and I think that made the difference to other tournaments we’ve played.
“It is no secret that you probably play better at home. There are so many examples. You have pressure, but you don’t have pressure. If you can change the pressure into a positive and use it for positive energy. If you can’t do it, you won’t go far.”
Julius Thole and Clemens Wickler are Germany’s leading men’s duo, and they showed their ability to rise to a big occasion when they won silver at The Hague 4-Star in January. They also finished fourth when Hamburg hosted the 2018 FIVB World Tour Finals.
They will play in the same venue at the World Championships, the 13,000-capacity Rothenbaum Stadium, the latest in a line of spectacular arenas to host the World Championships. It follows on from the purpose-built 10,000-capacity Danube Island stadium that was constructed for Austria 2017.
Being the highest-profile home side brings a special kind of pressure as sponsors and fans want their moment with you. However, it wasn’t something that distracted Doppler and Horst, in fact they used it to drive their dream of finishing among the medals.
“I think Thole and Wickler will go far in this tournament,” Doppler said. “I know those guys and how they play. You saw how they played at the World Tour Finals where they had an unbelievable tournament.
“We only had one game a day, so we decided not to refuse anything. We did everything because there was so much positive energy from the fans. They were all friendly and we really enjoyed this energy and it pushed us along. So we did everything we could and it didn’t distract us and it meant we didn’t only think about the next game.”