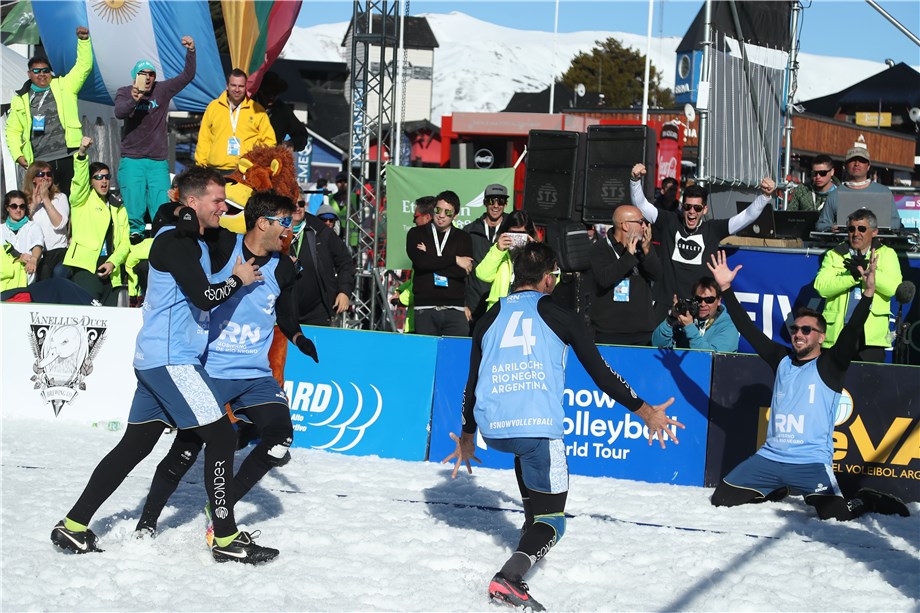 Bariloche, Argentina, August 4, 2019 - The home team of Leo Aveiro, Fabrizio Satriano, Sebastian Fernandez and Ramiro Nuñez gave Argentina a first-ever Snow Volleyball World Tour title after bouncing back at a nail-biting final match to defeat USA’s Troy Field, Riley McKibbin, Maddison McKibbin and Jameson McKibbin in a packed court in Bariloche.
The hosts entered the Men’s draw for the first time ever and it was a really positive balance for them, as the main team formed by Mauro Zelayeta, Bautista Amieva, Ian Mehamed and Santiago Aulisi stepped onto the podium to add a bronze medal to the golden one.

Quick links - Snow volleyball:
FIVB Snow Volleyball World Tour - Bariloche, Rio Negro
FIVB.com - Snow volleyball
Rules of the Game 2018-2020
News
About
Probably no one in Bariloche was expecting this twist of events when USA cruised all the way in Set 1, but Argentina’s resilience came to light afterwards. The second set was a thrilling contest which included a risky play with MVP Nuñez going behind the panels to retrieve a ball, and Argentina eventually leveled the scores. The final chapter saw the hosts trailing once again, but Aveiro’s blocking abilities changed the tide and, after 50 minutes of struggle, the South Americans were crowned by 2-1 (10-15, 20-18, 15-11).
“This is incredible; I’ve never lived something like this” said an ecstatic Nuñez after the match. “This is even my first time on the snow! It was a crazy adventure from a group of friends who tried to do their best at every match of an amazing competition.”

A Youth Olympic Games indoor medalist with Argentina at Singapore 2010, Nuñez added: “The people showed how great Snow Volleyball is. All of the fans came to the mountain for skiing or snowboarding but they chose to stay and enjoy the matches. There were fans at every match we played. It’s a very entertaining sport at a fantastic placement.” 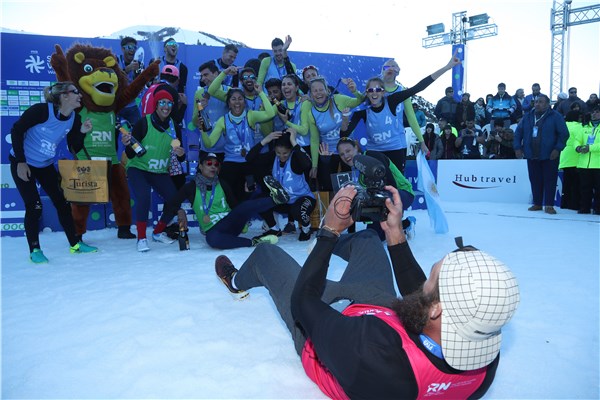 The fans were already ecstatic with the first coming-from-behind win of Argentina 2, over Russia’s Dmitri Barsuk, Yury Bogatov, Nikita Kuzmin and Petr Bakhnar at the first semifinal match. The European side started in control, but the crowd pushed the hosts to the tie and then exploded with the solo block from Nuñez that settled the definitive 2-1 (9-15, 15-8, 17-15).
The next shift held another solid performance of the champions as the McKibbins and Field skillfully dealt with Argentina’s Zelayeta, Amieva, Mehamed and Aulisi, delivering them their first defeat of the competition by 2-0 (15-11, 15-8). However, they quickly regrouped and clinched the bronze over Russia in two chapters, by 15-11 and 16-14.