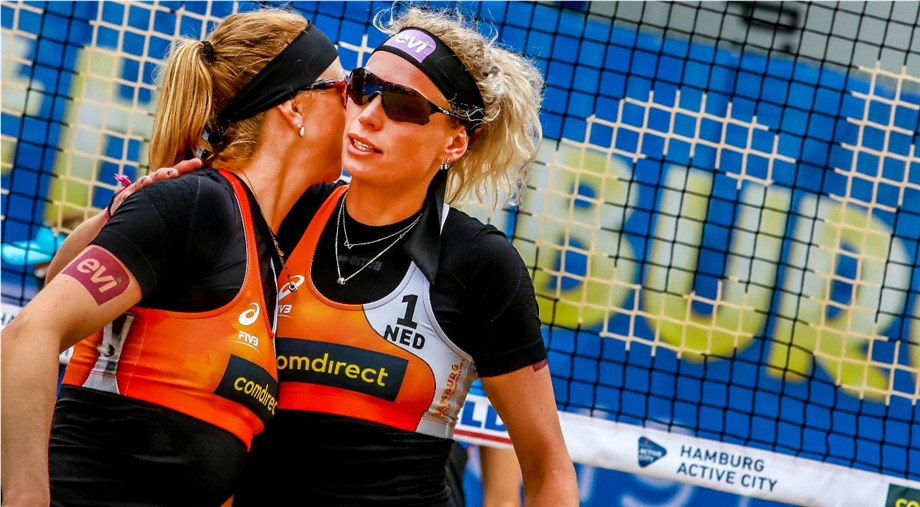 Hamburg, Germany, July 2, 2019 - Pool title No. 2 for the Netherlands was achieved here Tuesday morning as reigning European champions Sanne Keizer and Madelein Meppelink joined compatriots Joy Stubbe and Marleen van Iersel with 3-0 match marks in the 2019 FIVB World Championships at Am Rothenbaum Stadium.
Quick links - Beach volleyball:
FIVB Beach Volleyball World Championships Hamburg 2019
FIVB.com - Beach volleyball
Facebook
Twitter
Instagram
Seeded eighth in the competition, Keizer and Meppelink posted a 2-0 (21-18, 21-18) Pool H win in 37 minutes over 17th-seeded Nina Betschart and Tanja Huberli of Switzerland. It was the Dutch pair's first win over Betschart and Huberli on the FIVB World Tour in three meetings, but Keizer and Meppelink defeated the Swiss last July in The Hague for the European crown.
While Keizer and Meppelink did not lose a set in their three pool matches on the Rothenbaum courts, the 31st-seeded Stubbe and van Iersel had to defeat higher-ranked pairs to capture Pool G with wins over seventh-seeded Mariafe Artacho/Taliqua Clancy of Australia and 18th-seeded Brooke Sweat/Kerri Walsh Jennings of the United States.
When asked about the intensity of the match with the Swiss, Meppelink said: “I don’t know if this was the most intense we’ve played, but for this World Championships, for sure this was the most intense game we’ve had so far. We’ve played them before a couple of times, they’re a very good team so we knew it would be a tough game and I’m happy we won.” 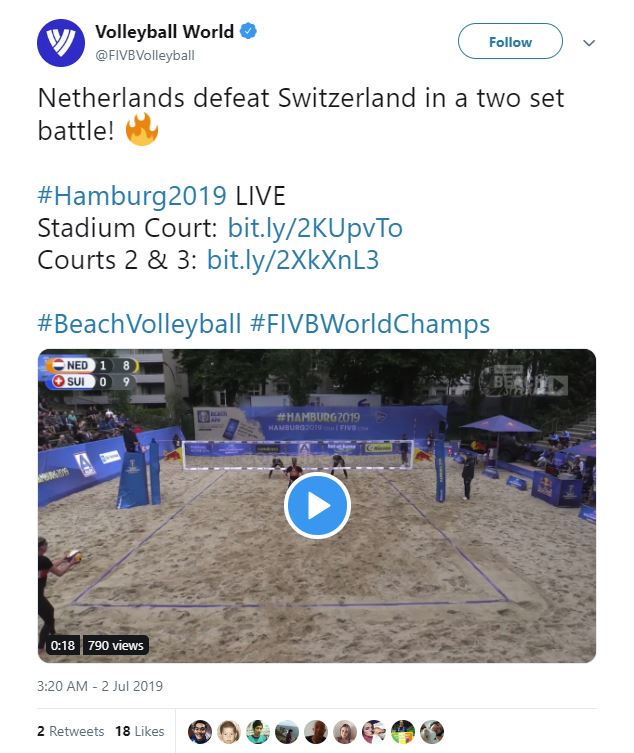 In both sets on Tuesday, the Dutch were trailing and asked for time-outs.  “I have no idea,” said Meppelink.  “I don’t think we talked that much. In the second set that was a bit more intense. We were like ‘This is not what we want.’ We were ‘Get back in the game, start playing our game.’ I think we did a good job with that.”
Keizer, a competitor in the Olympic Games with van Iersel, as was Meppelink, said the comebacks in both sets were “about smart thinking and it was hard work to get back in the two sets because we were behind. We did a good job of keeping focus on what we wanted to do and how we got there.”
For the Swiss, Huberli said: “The Duchies put a lot of pressure on us on serve and we were struggling to find the serve pressure we were looking for the whole game. We wanted to serve well but we didn’t almost the whole game so that was for sure a big difference. We had too many mistakes in our game and too many balls were not precise enough.”
Betschart said about the set leads that: “The Dutch took risks on their serve and they did well. It was difficult for us and we made some mistakes in important situations. They could turn both sets around and that’s the game.”
At the end of the mixed zone session on Tuesday, Keizer said “Now it really starts” while Betschart “was looking forward to the round of 32.  Now, the real World Championships start, and we are excited.”