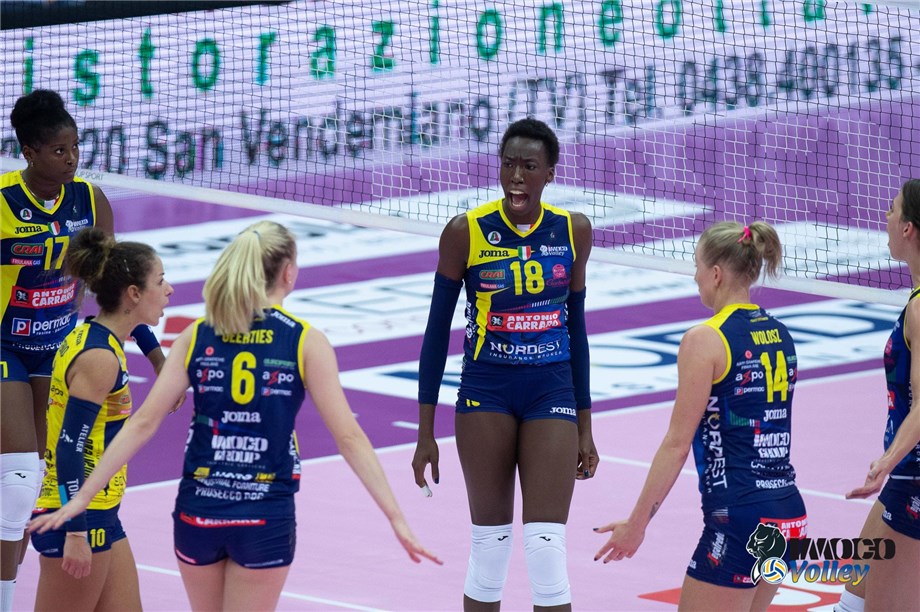 Lausanne, Switzerland, November 6, 2019 – Imoco Volley Conegliano’s appearance at the 2019 FIVB Club World Championship from December 3 through 8 in Shaoxing, China, will not only register the team’s debut in the competition, but also mark the return of Italian clubs to the annual event for the first time since 2016, when Pomi Casalmaggiore claimed the silver. Imoco’s captain Joanna Wolosz, sensational new addition Paola Egonu and the rest of their teammates are stoked about the opportunity to measure up against the strongest teams in the world.
The Panthers from Conegliano are coming into the Club World Championship as the reigning Italian champions and national Super Cup holders (with three national titles, one national cup and two Super Cup trophies over the past four seasons) and the current silver medallists from the CEV Champions League (with podium finishes in each of the last three editions), but also with an upgraded line-up reinforced by the likes of Italian internationals Paola Egonu and Indre Sorokaite as well as 2019 VNL champion and World Cup runner-up with USA, Chiaka Ogbogu, and Germany’s national team outside hitter Jennifer Geerties, who joined the bright constellation of returnees including Poland’s Joanna Wolosz, USA’s Kimberly Hill, Netherlands’ Robin de Kruijf and Italy’s Monica De Gennaro and Miriam Sylla, among others, for the start of this season. 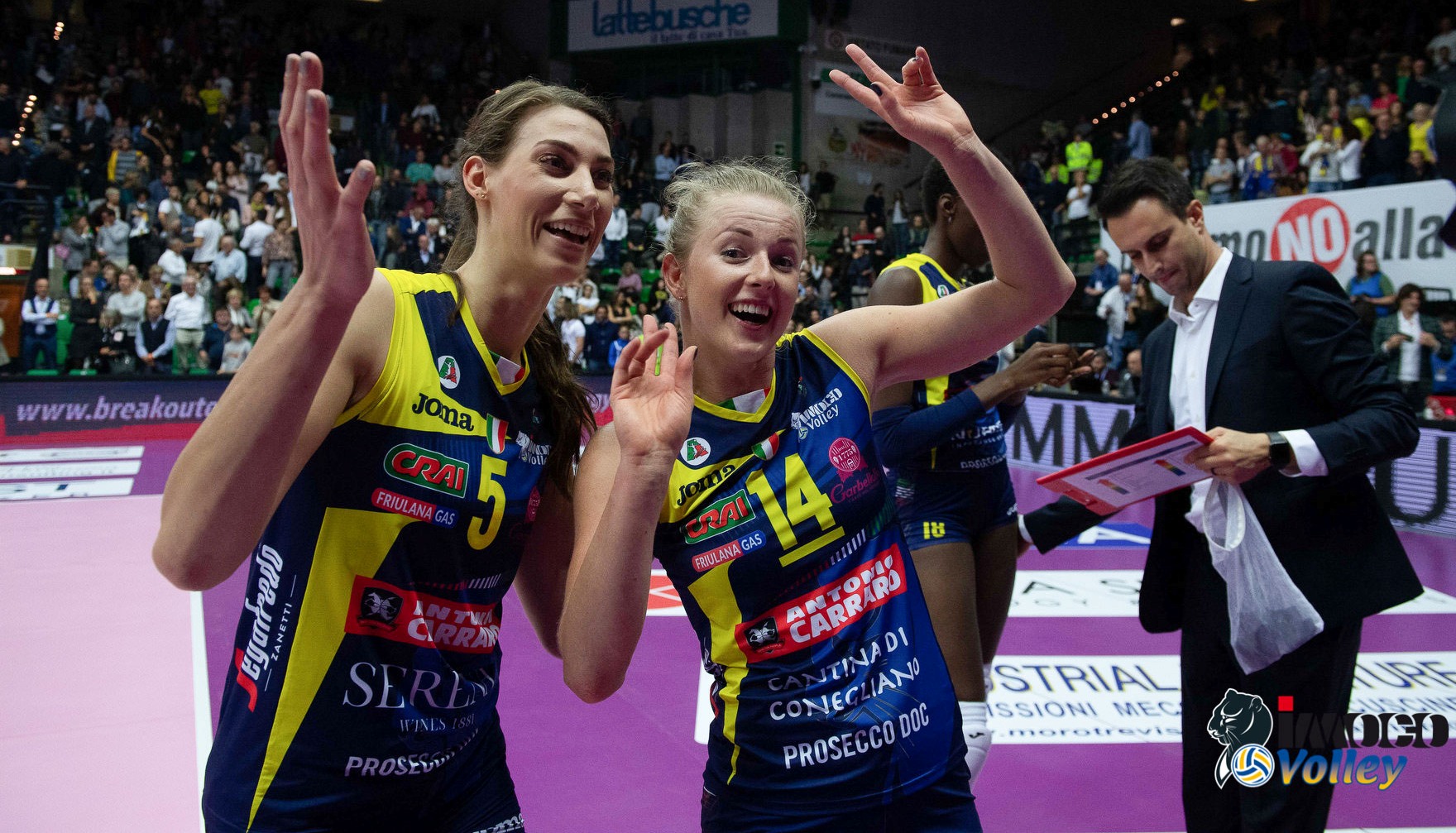 Robin de Kruijf and Joanna Wolosz showing their good mood on the court
“I am very happy and proud to play at the Club World Championship! It will be a fantastic experience for both our club and me,” Imoco’s setter and captain Joanna Wolosz told fivb.com. “The level of the games in China will be incredible as all the strongest players and the most competitive clubs in the world will be there. I look forward to being there as well and participating in this amazing event.”
The 29-year-old Polish international is within her third season with the club from Conegliano. In her first, she was named MVP of the Italian league and Best Setter of the Champions League.
“We will go to the Club World Championship to show our game system, have fun and entertain the audience by playing our best volleyball,” she continued. “We know that if we play well, we can beat anyone. We are training hard each day to be at the highest level and ready for a great challenge.”
Among the other foreign players from last season’s roster, who stayed on with Imoco, is outside spiker Kim Hill, gold medallist with the US national team and MVP of the 2014 World Championship, who will turn 30 years of age just days before Shaoxing 2019 begins. She aims at her second Club World Championship title and third podium finish, after winning the 2017 gold and the 2016 bronze with Turkey’s VakifBank Istanbul.
The strong presence of Italian national team players on the Imoco squad became even stronger, despite the departure of Anna Danesi. With 32-year-old Monica De Gennaro, the Best Libero of the 2014 and 2018 World Championships, of the 2017 World Grand Prix and of the 2017 Champions League, and 24-year-old Miriam Sylla, Dream Team outside spiker of the 2018 World Championship and of the 2019 European Championship, staying on, coach Daniele Santarelli can also rely on the services of 31-year-old striker and prolific point-maker Indre Sorokaite, 19-year-old attacker Terry Enweonwu, Dream Team opposite of the 2019 U20 and 2017 U18 World Championships, and 20-year-old prodigy Paola Egonu, arguably among the current top three of the world’s best players.
“I have never played at the Club World Championships before and I am training intensively with my new club to be at 100% with my head and my body at this great event,” stated Egonu, opposite of the 2018 World Championship Dream Team. “Our team started the season very well as we are winning a lot of games in the Italian championship, but in China we will be facing the best teams in the world and we know that every game will be tough. We want to do well and show that we are a competitive team even against the biggest international powers and the best players in the world.”
Paola Egonu was named MVP of the 2019 Champions League, which she won with her previous club, Igor Gorgonzola Novara, the other Italian participant at Shaoxing 2019. The teams from Conegliano and Novara met head to head in four out of four possible finals during the 2018-2019 season, with Imoco claiming the Italian championship and the Italian Super Cup and Igor Gorgonzola snatching the Italian cup and the continental crown in Europe’s Champions League. Before potentially opening a “fifth front” at the Club World Championship in December, the two teams are set to face each other two more times – in a league game on November 9 in Novara and in the new Super Cup duel on November 16 in Milan. Unbeaten in six matches, Imoco are the current leaders in Italy’s Serie A, followed by Igor Gorgonzola in second on a 5-1 win-loss record.
At Shaoxing, Imoco Volley will start off in Pool A, where they will play against Turkey’s Eczacibasi VitrA Istanbul on December 3, Chinese hosts Guangdong Evergrande Guangzhou on December 4 and Brazil’s Itambe Minas Belo Horizonte on December 6. The pool winners and pool runners-up will advance to the Club World Championship semifinals.
“I don't want to make a prediction about the winner of this Club World Championship title. The opponents that await us in China are all strong, all top-level squads, without any favourites. In a one-week tournament, there could be all kinds of surprizes and all participating teams can win the trophy,” captain Wolosz concluded.
Quick links - Volleyball:
FIVB Volleyball Women's Club World Championship
Facebook
Twitter
Instagram
Youtube