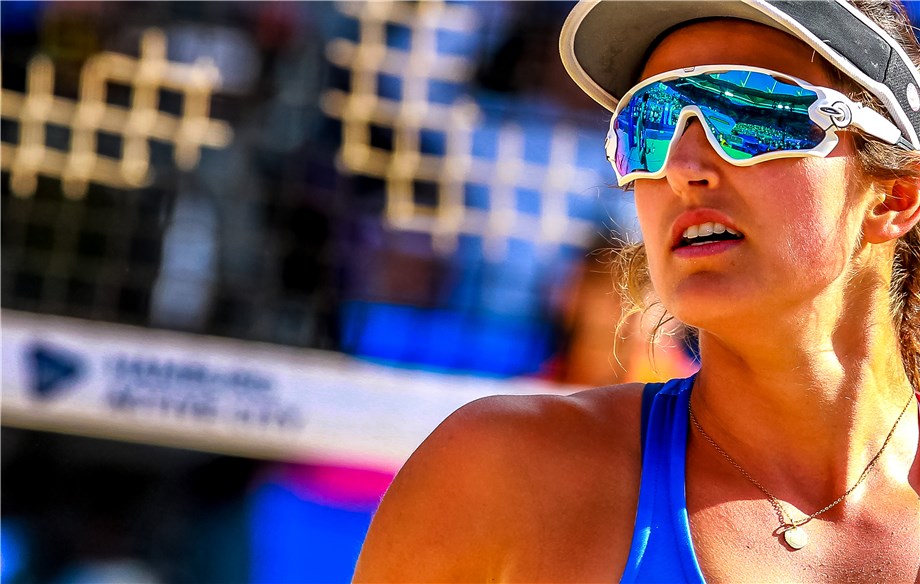 Sarah Sponcil of the United States is enjoying the 2019 FIVB World Championships with Kelly Claes as the former collegiate rivals advanced to Thursday's matches.

Hamburg, Germany, July 3, 2019 - Aspiring professional beach volleyballers who attended college in the United States have traditionally played indoor volleyball.
Quick links - Beach volleyball:
FIVB Beach Volleyball World Championships Hamburg 2019
FIVB.com - Beach volleyball
Facebook
Twitter
Instagram
That changed in 2016, when the National Collegiate Athletic Association began sanctioning women’s beach volleyball as a collegiate sport.
Since then, several female athletes have used NCAA beach volleyball as a springboard to launch their FIVB World Tour careers. When the 2019 collegiate beach volleyball season started in March, there were 101 foreign players from 37 countries listed on school rosters. A total of 127 colleges and universities field women's beach volleyball teams at both two- and four-year levels of play.
Eight athletes who competed in NCAA beach volleyball are playing at the 2019 FIVB Beach Volleyball World Championships, and not just for the United States.
Five are in Hamburg representing the United States: Kelly Claes, Sara Hughes, Kelley Larsen, Summer Ross and Sarah Sponcil. Tina Graudina is representing Latvia, while twins Megan and Nicole McNamara are representing Canada.
The McNamara twins and Sponcil attended the University of California, Los Angeles (UCLA). Claes, Hughes and Graudina attended the University of Southern California (USC). Larsen and Ross attended Pepperdine University.
“It was great preparation for the FIVB World Tour,” Claes said. “I am thankful and grateful to have gone through the pipeline of college beach volleyball.”
The McNamara twins and Sponcil arrived in Hamburg after helping UCLA win its second consecutive NCAA title in May. Competing at the NCAA championships helped the trio get ready to play on a stage as large as the FIVB Beach Volleyball World Championships.
“The venue here in Hamburg is much larger, but it definitely prepared us to play in front of a crowd,” Megan McNamara said.
The NCAA system creates compelling rivalry narratives on the World Tour. Sponcil, for example, partnered with an athlete (Claes) who attended a rival college and competes against her former collegiate teammates (McNamara twins).
“We’re friendly and support each other since we were on the same team, but it is a little bit different now,” Sponcil said about the McNamara twins.
One of the biggest adjustments for former NCAA athletes is no longer having teammates.
“I miss having a team behind me,” Sponcil said. “It’s just me and Kelly. We don’t have all of those girls behind us.”
2012 Olympic silver medallist Jen Kessy was an All-American playing indoor volleyball at USC. She wishes she would have had the opportunity to also play collegiate beach volleyball.
“I would have tried to play both at first,” said Kessy, who now coaches April Ross and Alix Klineman. “I grew up playing beach volleyball all summer when I was in college. Indoor was a lot of fun and I loved being a part of a team, so I am not sure I would have wanted to give that up, but it would have been fun to do both.” 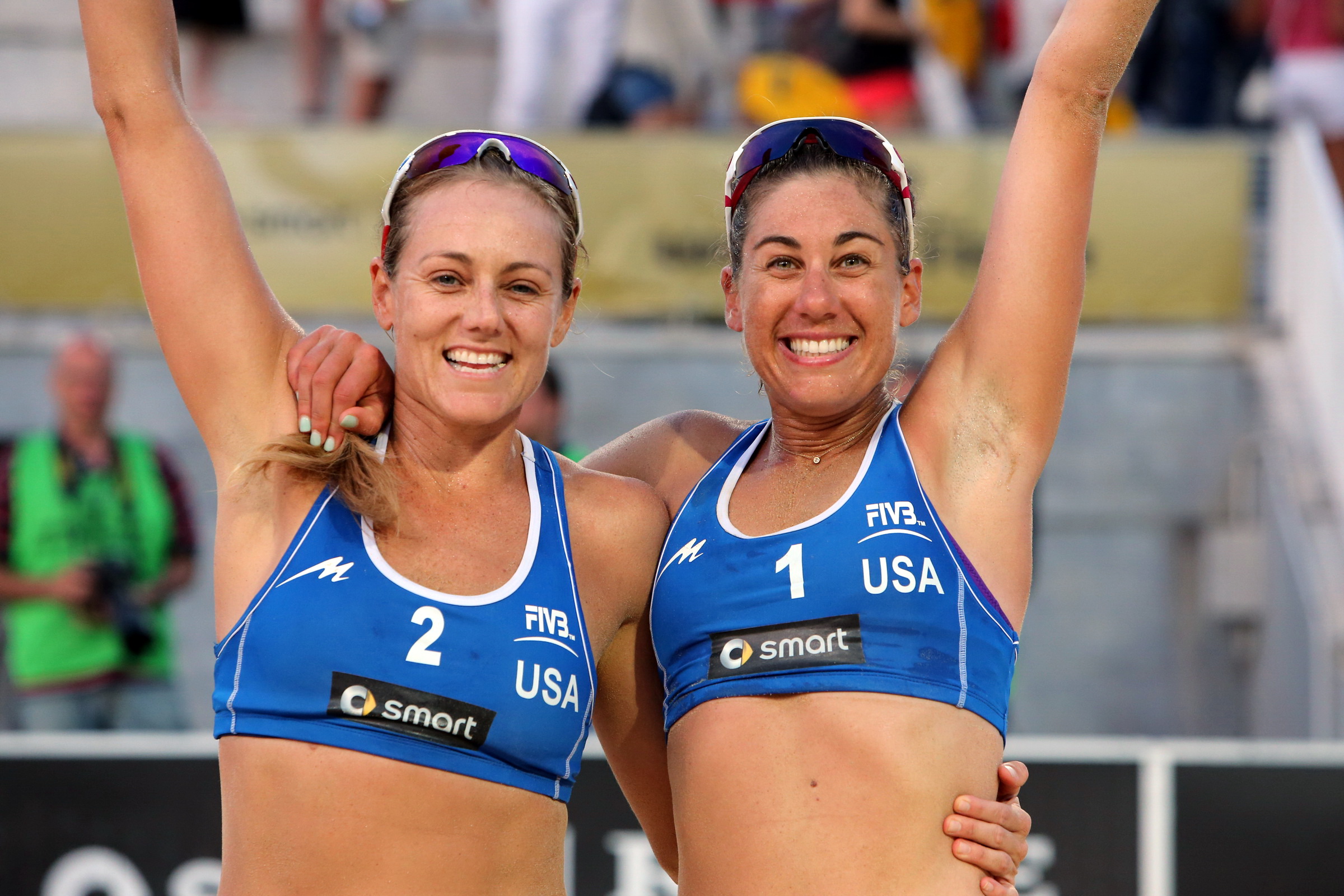 Jen Kessy (left) and April Ross teamed to win the 2009 FIVB World Championships and the silver medal at the London 2012 Olympic Games.
The NCAA athletes are already looking ahead to the 2028 Summer Olympics in Los Angeles. USC will host several sports, while the Olympic village will be at UCLA. 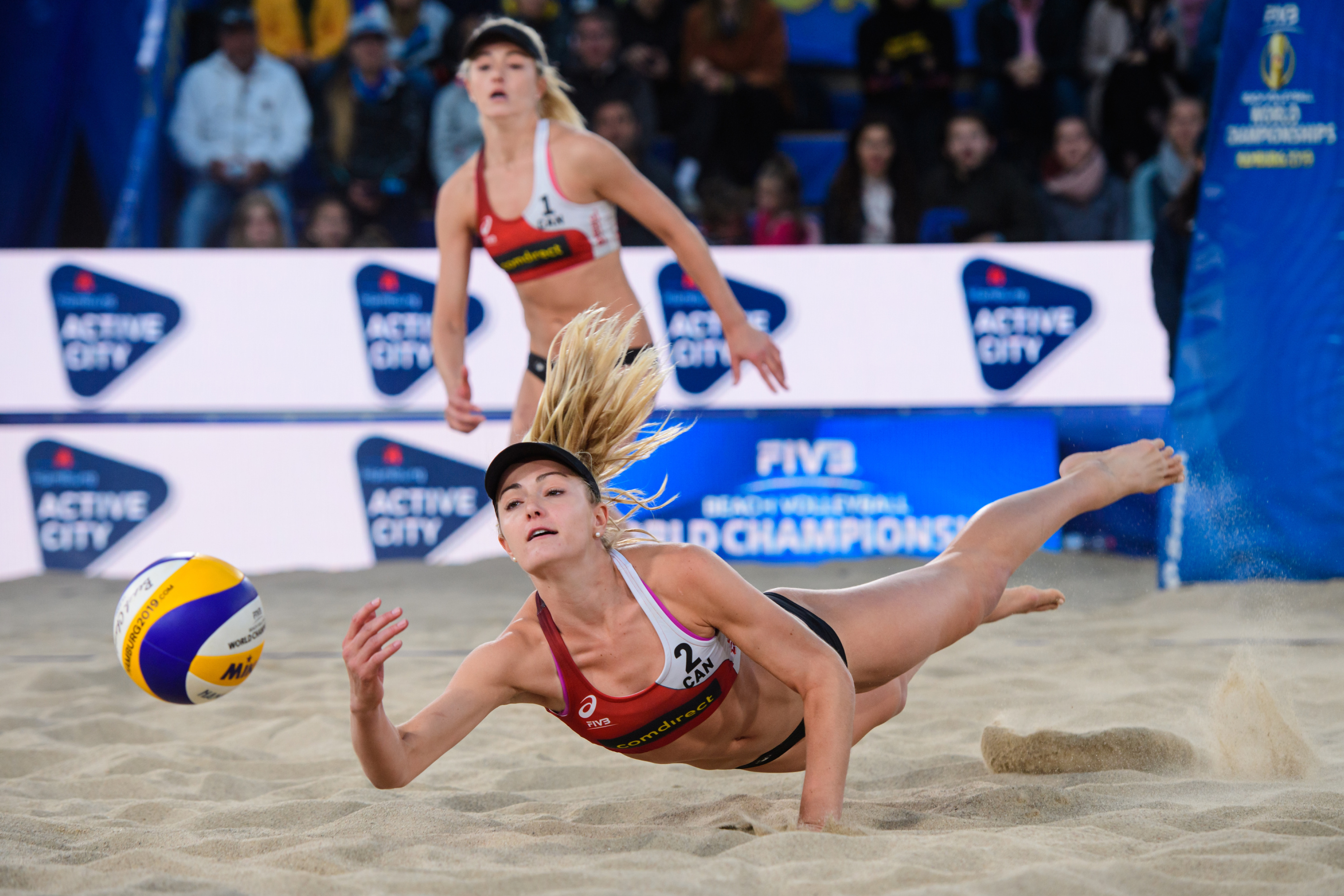 The McNamara twins of Canada
“I would put in a request to stay in our old dorm room,” Nicole McNamara said.
Five of the former collegiate beach volleyball players advanced to the Round of 16. Claes and Sponcil will play Italy’s Marta Menegatti and Viktoria Orsi Toth. Hughes and Ross will play Joy Stubbe and Marleen Van Iersel of the Netherlands. Graudina and partner Anastasija Kravcenoka will play Americans April Ross and Alix Klineman. Larsen and partner Emily Stockman lost in the Round of 32. The McNamara twins were eliminated in the lucky loser round.