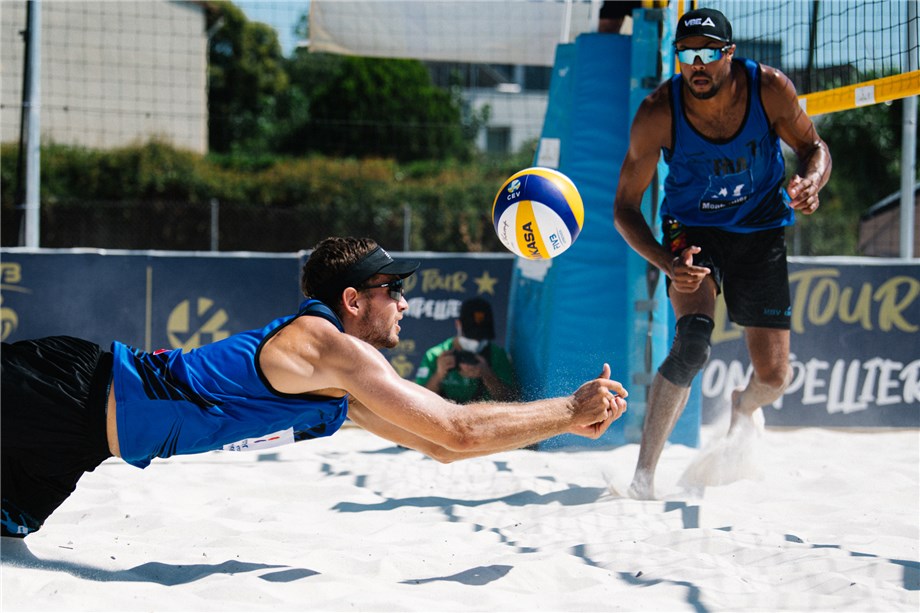 Montpellier, France, August 26, 2020 – The first eight teams to secure advancement to the elimination rounds of the men’s Montpellier 1-star stop on the 2020 FIVB Beach Volleyball World Tour were issued on Wednesday as the 16 duos played their first main draw matches, with the winners set to move beyond the pool stage of the tournament. 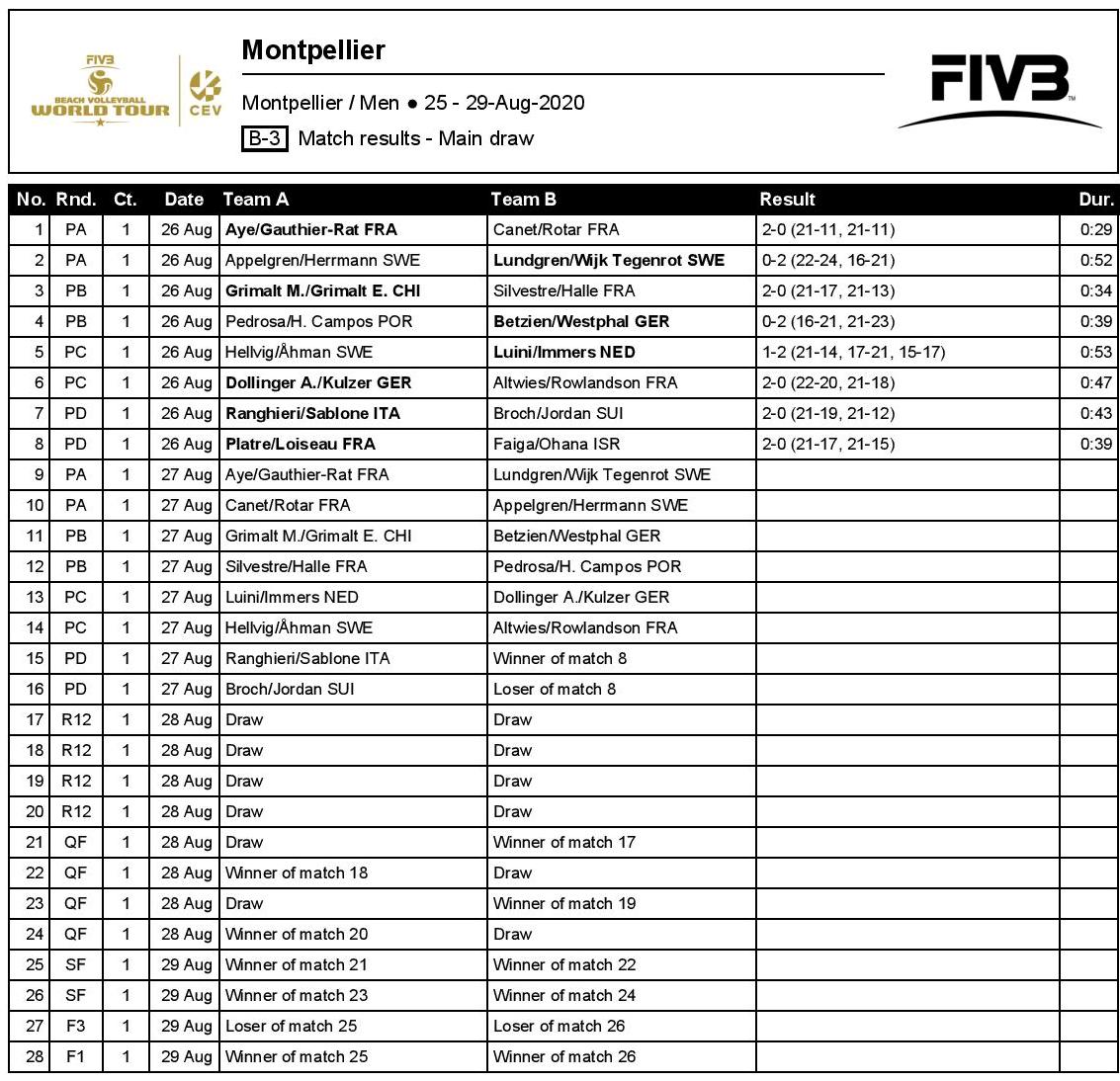 An all-French and an all-Swedish clash in Pool A opened the main draw action at Parc de la Rauze. Top-seeded Quincy Aye and Arnaud Gauthier-Rat were quick to dispose of wild cards Arthur Canet and Teo Rotar with a 2-0 (21-11, 21-11) shutout. Persevering through a hard-fought first set of the game between the two Swedish pairs, seeded in the middle of the bracket, Peter Lundgren and Jakob Wijk Tegenrot went on to close the deal in straight sets for a 2-0 (24-22, 21-16) victory over Martin Appelgren and Alexander Herrmann.
Second-seeded Chilean cousins Marco Grimalt and Esteban Grimalt, the only participating pair from the top 25 of the FIVB World Ranking, faced few issues on the way to a 2-0 (21-17, 21-13) win over France’s Jeremy Silvestre and Titouan Halle in Pool B. Germany’s Max Betzien and Dirk Westphal, seeded 10th, upset seventh-seeded Joao Pedrosa and Hugo Campos of Portugal, also in straight sets, but with the second one extended into overtime – 2-0 (21-16, 23-21). 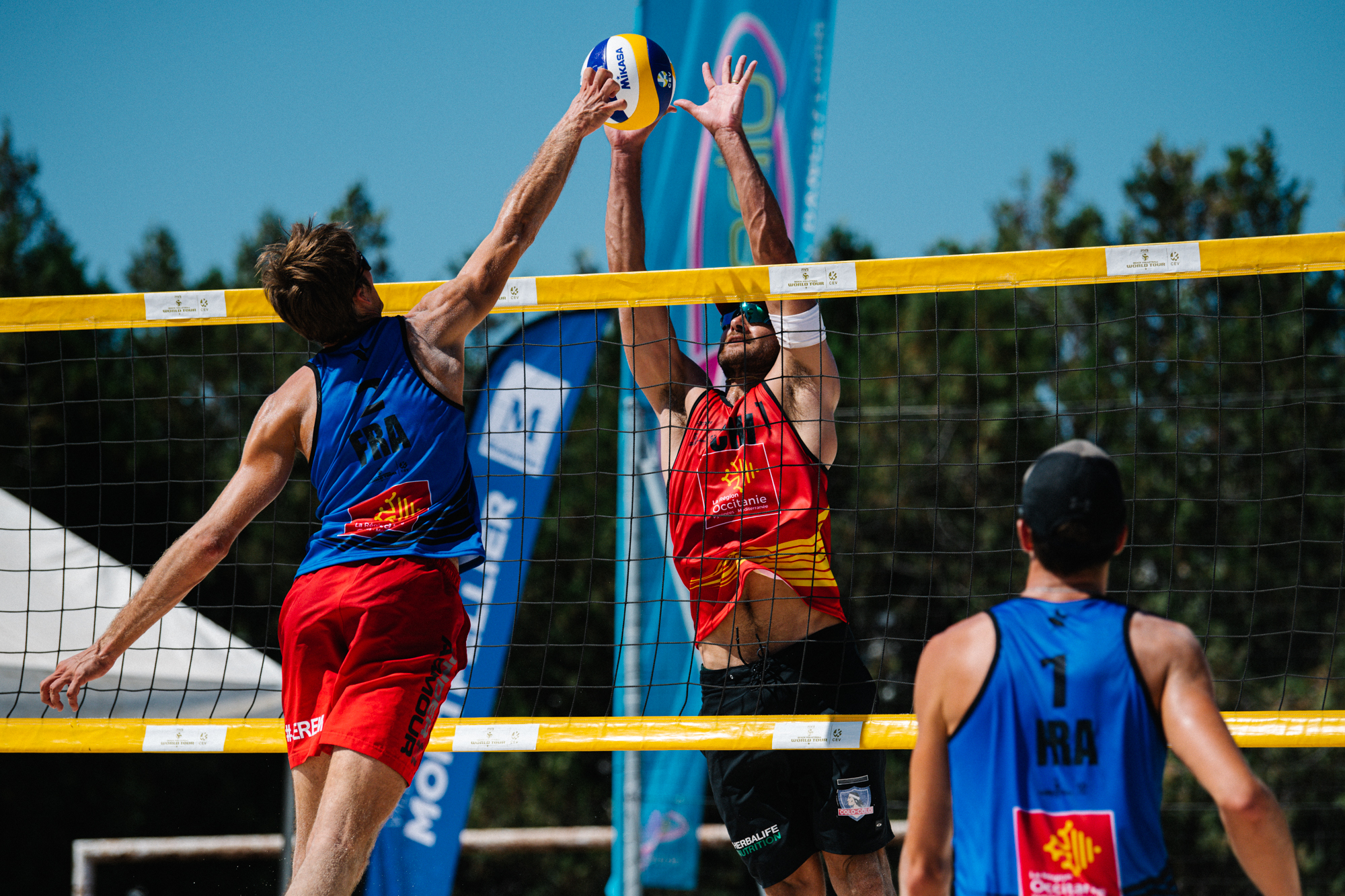 Chile’s Marco Grimalt blocks an attack by France’s Titouan Halle
After knocking out the number one seeds in Tuesday’s qualification bracket, the Dutch duo of Leon Luini and Matthew Immers, seeded 14th in the main draw, delivered another upset of a Swedish opponent to get Pool C action underway. Luini and Immers fought back from a set down against third-seeded Jonatan Hellvig and David Ahman to celebrate with a nail-biting 2-1 (14-21, 21-17, 17-15) victory. Sixth-seeded Armin Dollinger and Simon Kulzer of Germany won two tight sets over France’s Tom Altwies and Edouard Rowlandson to emerge with a 2-0 (22-20, 21-18) win.
Pool D seeding leaders Alex Ranghieri and Daniele Sablone of Italy lived up to their status and managed a 2-0 (21-19, 21-12) shutout of Swiss qualifiers Nathan Broch and Jonathan Jordan. So did the home pair of Timothee Platre and Arnaud Loiseau, seeded fifth, who mastered a 2-0 (21-17, 21-15) victory over Israel’s Sean Faiga and Netanel Amiram Ohana.
The deciding pool matches for the first four quarterfinal spots, as well as those crucial for survival in the tournament are scheduled on Thursday.
Live streaming of the matches is available at the Montpellier Beach Masters video channel on YouTube.
Quick links:
FIVB Beach Volleyball World Tour - Montpellier 1-star
FIVB Beach Volleyball World Tour
Olympic Games Tokyo 2020
Facebook
Twitter
Instagram
Youtube