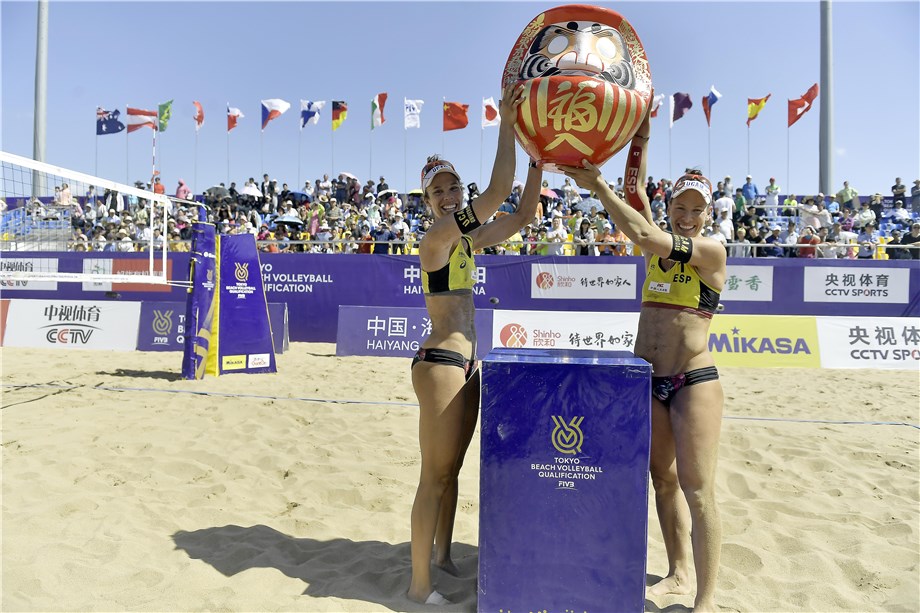 Haiyang, China, September 22, 2019 - Elsa Baquerizo and Liliana Fernandez claimed a berth for Spain's women at the  Tokyo 2020 Olympics as they recovered from a slow start to defeat Germans Sandra Ittlinger and Chantal Laboureur in the first of two finals here Sunday at the FIVB Tokyo Beach Volleyball Olympic Qualification tournament.
Quick links - Beach volleyball:
Tokyo Beach Volleyball Qualification - Haiyang
Facebook
Twitter
Instagram
With their 2-1 (18-21, 21-17, 15-10) win in 59 minutes, Elsa and Liliana avenged a setback to the Germans Thursday during the pool play phase of the competition on Golden Beach were Ittlinger and Laboureur posted a 2-0 (23-21, 21-19) victory in 43 minutes.
When asked if the win was their most memorable in their 120 FIVB events together, the 32-year-old Elsa said: "Yes!  It has been a long season with a lot of frustrations, especially since we reached the quarterfinals several times (four to be exact) and never advanced to the medal rounds."
"The wind was a factor for our slow start in the first set," said the 32-year-old Liliana, who placed ninth with Elsa at both the London 2012 and Rio 2016 Olympic Games. "It was frustrating us, and we finally settled now at the end of the first set and started handling the windy conditions better."

Liliana, who missed the 2017 season due to childbirth, said qualifying for Tokyo this week was "unexpected.  There were a lot of matches to play again very tough teams.  We were ranked among the best on the provisional list for Tokyo but securing the berth to next summer's Olympics is great.  What a relief and we can relax now for a few months before getting ready for Tokyo."
The Spaniards, who are ranked 16th on the FIVB World Tour ranking list and currently hold position No. 8 on the provisional ranking list, won six of eight matches this week and finished the competition with five-straight victories over pairs from Brazil, China, the Czech Republic, Poland and Germany."
In Sunday's second women's finale, newly-crowned European champions Graudina and Kravcenoka meet the Czech Republic team for the first time in an FIVB-sanctioned match.  Hermannova and Slukova have been competing internationally since the mid-2000s while the Latvians are completing their second full season on the FIVB circuit.