End of an era? Zenit’s earliest ever Champions League exit

Kazan, Russia, February 20, 2020 – Two Russian rookies in the men’s CEV Champions League, Fakel Novy Urengoy and Kuzbass Kemerovo, advanced to the quarterfinals of Europe’s strongest club competition, but judging by the publications in Russian media what they find far more shockingly sensational is the exit of Tatarstan’s powerhouse Zenit Kazan, the earliest ever since their debut in the 2007-2008 season.

Kazan, Russia, February 20, 2020 – Two Russian rookies in the men’s CEV Champions League, Fakel Novy Urengoy and Kuzbass Kemerovo, advanced to the quarterfinals of Europe’s strongest club competition, but judging by the publications in Russian media what they find far more shockingly sensational is the exit of Tatarstan’s powerhouse Zenit Kazan, the earliest ever since their debut in the 2007-2008 season.
Zenit won the continental title at their very first appearance in the Champions League and then another five times, including four in a row from 2015 through 2018. Not only did they always progress beyond the pool stage of the competition, but since 2010 they have never missed the final four. However, this incredible streak is now over. The team from Kazan that also boasts five FIVB Club World Championship medals including the 2017 title finished their Champions League campaign this season in third place in Pool C on a 3-3 win-loss record, failing to make the elimination stages for the first time in their history.
Bad luck may have something to do with the current state of affairs in the star-studded squad of Zenit, since two of their defeats came in thrilling five-setters after incredible comebacks for their opponents. In the first match of their campaign, at Greenyard Maaseik, the Russians were two sets up before allowing a complete turnaround with a nail-biting 20-18 tie-breaker win for their Belgian opponents. When they welcomed Poland’s Jastrzebski Wegiel Jastrzebie-Zdroj to Kazan for their third game in the pool, Zenit wasted one-set leads twice in the match and then failed to convert a 14-9 advantage in the fifth, allowing the Polish opponents a seven-point run to victory. 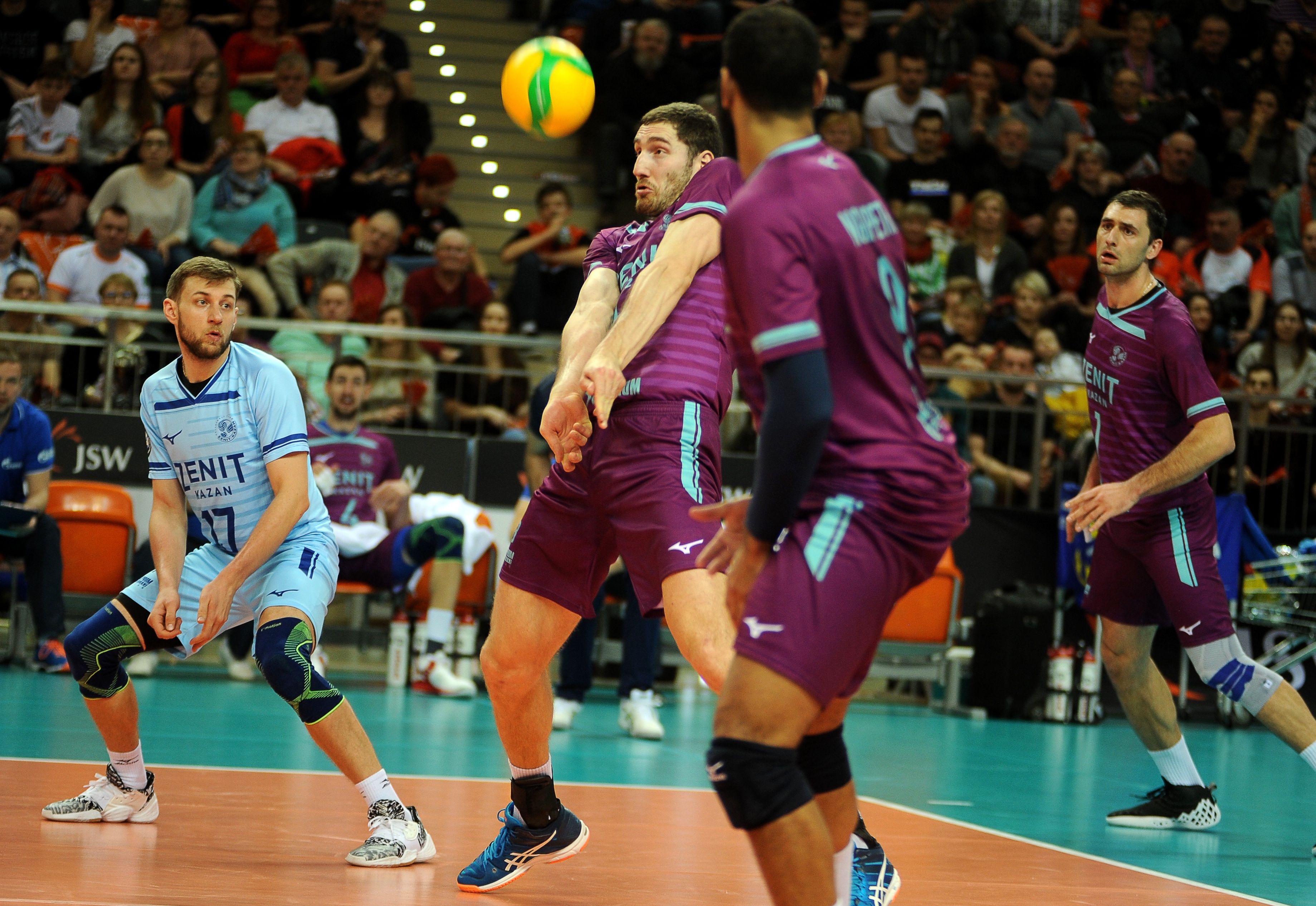 Despite also having to cope with the unusual task of receiving, Maxim Mikhailov was the second best scorer of the pool stage
It is hard to argue that the main reason behind the fallout is the experiment of moving Russian national team opposite Maxim Mikhailov to an outside spiker position to make space for the opposite of the Bulgarian national team, Tsvetan Sokolov, since both of them ranked high in the individual charts. Mikhailov is the second best scorer of the Champions League pool stage with a total of 116 points to his name, followed by Sokolov in third on a tally of 112. In the best attackers’ ranking, Sokolov is second with 99 points and Mikhailov is third with 96.
Another Russian international from Zenit, Artem Volvich, finished on top of the best blockers chart with 19 kill blocks, while Zenit’s French super star Earvin Ngapeth and Russian national team member Fedor Voronkov rank fifth and sixth, respectively, among the best receivers.
With this early exit from the Champions League, Zenit can now turn the focus completely on their domestic Superliga where they currently stand third, two wins short of leaders Lokomotiv Novosibirsk. 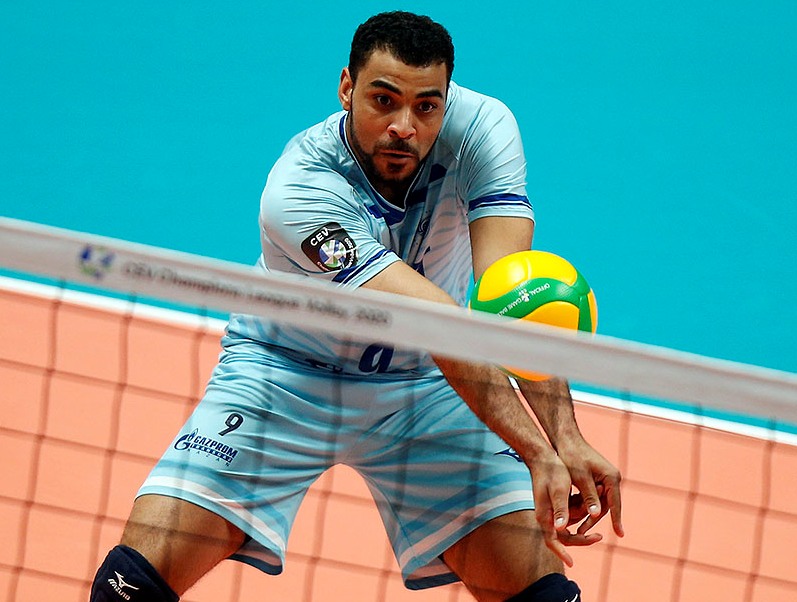 France’s Earvin Ngapeth was one of the best receivers in the Champions League
In Pool B, Champions League newcomers Fakel Novy Urengoy and Kuzbass Kemerovo competed neck and neck and claimed the top two positions in the pool standings. Fakel finished first on a 5-1 win-loss record. Kuzbass came in second on 4-2 and progressed to the quarterfinals as one of the three best ranked runners-up across the five pools.
While Fakel had already secured their advancement a leg earlier, Kuzbass’s spot in the last eight lay upon a home victory over Berlin Recycling Volleys in Wednesday’s last leg of the pool stage. With a solid contribution from Yaroslav Podlesnykh (24 points, including five blocks) and Victor Poletaev (22 points, including two aces and two blocks), the home side managed a precious five-set win over the German club of their teammate in the Russian national squad, setter Sergey Grankin. 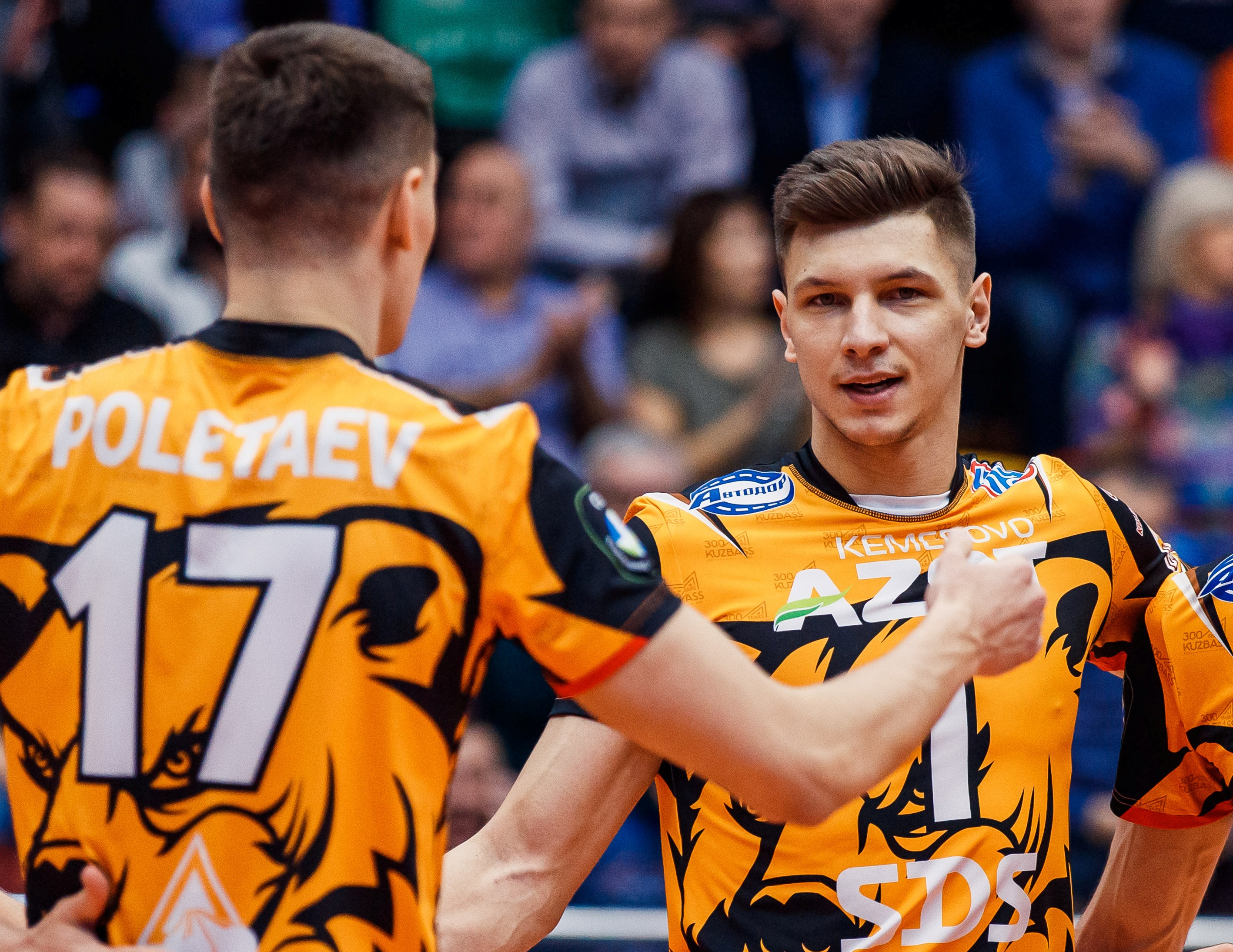 Russian internationals Yaroslav Podlesnykh and Victor Poletaev celebrate another point for Kuzbass against Berlin Recycling Volleys
On a total of 96 points over Kuzbass’s six games in the pool, Podlesnykh was the fourth best scorer of the pool stage, as well as the sixth best attacker on a spiking tally of 80 points.
In addition to Zenit’s Volvich, as many as four more players of the Russian clubs ended up among the best 10 blockers. Kuzbass’s Mikhail Shcherbakov and Dmytro Pashytskyy ranked second and seventh, respectively. Fakel’s Alexander Gutsalyuk finished fourth, while his teammate Denis Bogdan took the 10th place. Bogdan, however, topped the chart of the most efficient blockers, followed by another Fakel player, Russian international Dmitrii Volkov, in second. 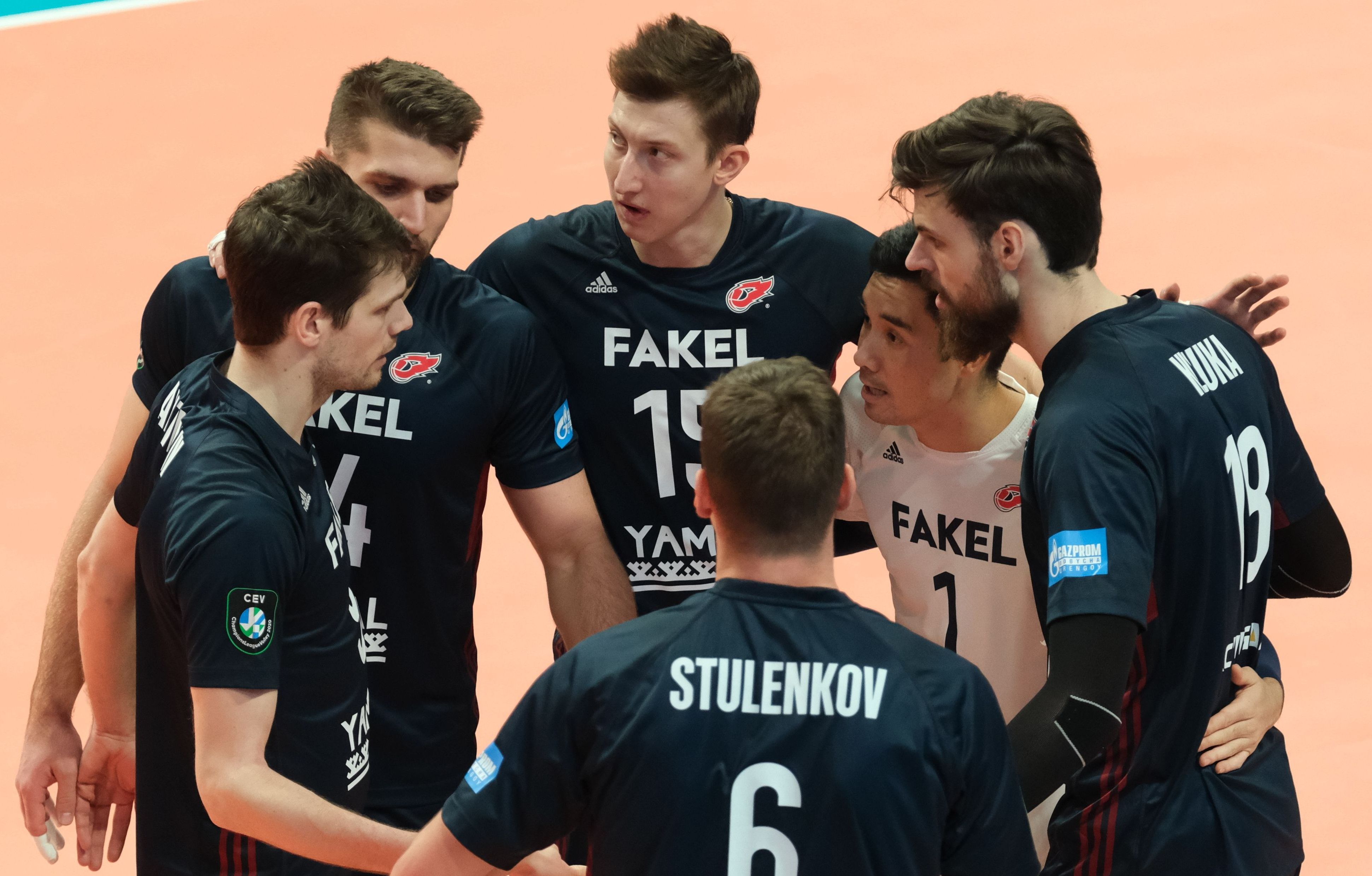 Fakel’s players huddle during a Champions League match
On other accounts, Denis Shipotko and Nikita Stulenkov, both of Fakel Novy Urengoy, were fifth for most efficient receiver and for most efficient server, respectively.
With the drawing of lots for the quarterfinals set to take place on Thursday, Fakel and Kuzbass will soon find out who they play next in the Champions League.
More volleyball from Russia:
Kseniia Parubets shines as Champions League top scorer
Olympic champ returns to Russian Superliga
Russian national team opposites engage in scoring race
Poletaev back in action after injury
Goncharova proves priceless for Dinamo
Quick links:
FIVB Volleyball Nations League
Olympic Games Tokyo 2020
Facebook
Twitter
Instagram
Youtube