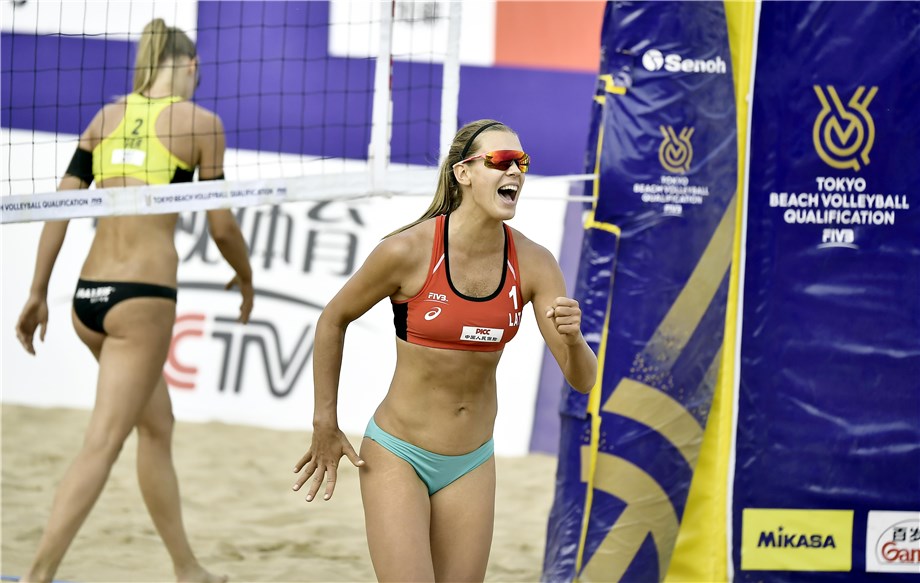 Graudina and Kravcenoka, who have participated in only 22 FIVB World Tour events together, secured their berth in the finals by posting a 2-0 (21-19, 21-13) win in 32 minutes over Lena Plesiutschnig/Katharina Schutzenhofer of Austria to win Pool J.  It was the Latvians fifth win in six FIVB matches with Plesiutschnig and Schutzenhofer.
"It is a thrill for us to make the finals," said the 21-year-old Graudina, who has had an exhausting 2019 campaign as she started the year earning All-American collegiate honors at the University of Southern California where her team placed second in the national championships.
"Reaching the Olympics has always been our goal this season but winning the European championships last month in Moscow was special and unexpected.  It is like frosting on the cake," said Graudina.  "Winning in Moscow at the CEV finals has given us a lot of confidence.  We look forward to Sunday and competing for a spot in the Olympics."
The Latvians finished in a three-way tie with pairs from Italy and Germany for the Pool J leadership as each team finished the group with 2-1 match marks.  With point ratio being used to break the deadlock among the three tandems, Graudina and Kravcenoka had a 1.068-point ratio with Sandra Ittlinger/Chantal Laboureur of Germany second (0.989) and Marta Menegatti/Viktoria Orsi Toth of Italy third (0.956).
After Graudina and Kravcenoka's win over the Austrians, Ittlinger and Laboureur posted a 2-1 (21-15, 19-21, 15-9) win in 58 minutes over Menegatti and Orsi Toth.  If the Italians had scored two additional points in either the first or third sets, Menegatti and Orsi Toth would finish second to advance to Sunday's finals.
Quick links - Beach volleyball:
Tokyo Beach Volleyball Qualification - Haiyang
Facebook
Twitter
Instagram
Winning the opening women's pool play matches Saturday to advance to Sunday's finals were Elsa Baquerizo and Liliana Fernandez of Spain and Barbora Hermannova and Marketa Slukova of the Czech Republic.
Elsa and Liliana captured Pool I with a 3-0 record and play Ittlinger and Laboureur in Sunday's first final.  The two teams played earlier this week in the Tokyo qualifier with the Germans posting a 2-0 (23-21, 21-19) pool win in 43 minutes Thursday over Elsa and Liliana.
Hermannova and Slukova finished second in their group with a 2-1 record and meet Graudina and Kravcenoka in the second final.  It will be the first FIVB meeting between the two teams.
The winning teams in Sunday's final matches will secure a spot for their country in the Tokyo 2020 Olympic Games.