Jurmala, Latvia, September 15, 2020 - There is no Hamburg this year. No Rome or Gstaad or Vienna. Since Mexico stunned its way to the finals at the 4-star in Doha, which was held in March, much has happened – and not happened.

Jurmala, Latvia, September 15, 2020 - There is no Hamburg this year. No Rome or Gstaad or Vienna. Since Mexico stunned its way to the finals at the 4-star in Doha, which was held in March, much has happened – and not happened.
It’s unfortunate, but there is one positive: it makes the CEV EuroBeachVolley 2020 held this week in Jurmala, Latvia, even more important.
The King of the Court, held last week in Utrecht, served as a wonderful tune-up, a frenetic prep both for fans and players alike. And with much anticipation, we did our best to compile a comprehensive preview for you.
Below are the favourites, contenders, and dark horses to watch this week in Latvia.
Men’s European Championships preview
Favourites
Anders Mol, Christian Sorum, Norway
Viacheslav Krasilnikov, Oleg Stoyanovskiy, Russia
Clemens Wickler, Julius Thole, Germany
There could be a very significant result this week in Jurmala, as Mol and Sorum attempt to make it three consecutive European Championship victories. This one, however, may be the most difficult of the three. The 2020 European Championships will feature a far more polished German team in Thole and Wickler, who looked typically fantastic at the King of the Court. And it will also feature the one team on the planet who seems to have Norway’s number: Russia’s Krasilnikov and Stoyanovskiy, who stymied Mol and Sorum in the semifinals of the Rome FIVB Beach Volleyball World Tour Finals and claimed the World Championships in Hamburg in 2019.
There was a period where there was an easy answer to what team is the best in the world. Now, that answer is no longer so easy, with Russia able to make a convincing argument, and Germany not far behind.
Contenders
Mirco Gerson, Adrian Heidrich, Switzerland
Aleksandrs Samoilovs, Janis Smedins, Latvia
Piotr Kantor, Bartosz Losiak, Poland
One of the most fun storylines of 2019 was the rise of Swiss volleyball. In July, Marco Krattiger and Nico Beeler won the first Swiss gold medal in 13 years, claiming gold at the Edmonton 3-star. Then Gerson and Heidrich did the same three months later, in Qinzhou, China. They haven’t been able to medal on the biggest stage just yet, but they’ve come close, and have proven they can hang with the best, challenging Krasilnikov and Stoyanovskiy well in Rome, and taking a fifth in Vienna and another top-10 in Gstaad.
The other two contenders – Samoilovs and Smedins, Kantor and Losiak – are a bit different than the upstart Swiss teams. More established. They’re both coming off challenging years. The Polish were hobbled with injuries, rarely fully healthy for a tournament. Samoilovs and Smedins, though they did medal twice, finished outside the top 10 seven times, the most since they began playing together. Both teams look fully rejuvenated last week at the King of the Court in their own ways.
Samoilovs and Smedins, two magnificent ball control players, switched coaches, hiring Italian Marco Solustri, who has opened up their offense to feature a variety of fast plays that made even Mol look uneasy at times in a fun exhibition on the Lofoten Islands. You also cannot deny the advantage of playing at home in Jurmala, where the Latvians won gold a year ago.
Kantor and Losiak, meanwhile, after slowing down their spread, shooting, chaos offense, returned to it, looking very much like the dominant team they had been for years at the King of the Court.
Dark horses
Kusti Nolvak, Mart Tiisaar, Estonia
Florian Breer, Marco Krattiger, Switzerland
Dries Koekelkoren, Tom van Walle, Belgium
Credit must be due to our most recent Kings of the Beach: Krattiger and Breer. They were the surprise team of the event, seeing as Breer, who is only 21 years old, had spent much of the previous few years in 1- and 2-stars. Yet they sided out better than any other team in the tournament, finishing with crowns atop their heads. With little to no film or tendencies on Breer, they could be a dangerous team to play against, with loads of momentum on their sides.
The Belgians, too, enjoyed an excellent week in Utrecht. van Walle was an absolute menace at the service line, pounding in these lefty hook serves into the seam that left many scratching their heads as they walked back to the contenders side of things. They, too, proved to be a formidable side out team, one that can upset virtually anyone this week in Latvia.
The Estonians did not play King of the Court alongside the Swiss and Belgians. Instead, they played a normal format – and they won gold, winning four straight matches in Vilnius, Lithuania. It was their first gold medal as a team, but if their current trajectory is any indicator, it will be far from the last.
They enjoyed a breakout season in 2019, tripling their career-high prize money, winning silver in Jurmala, where their only loss was in the finals to the hometown boys, Smedins and Samoilovs. Don’t let their 17 seed fool you: the Estonians are a high-level team. 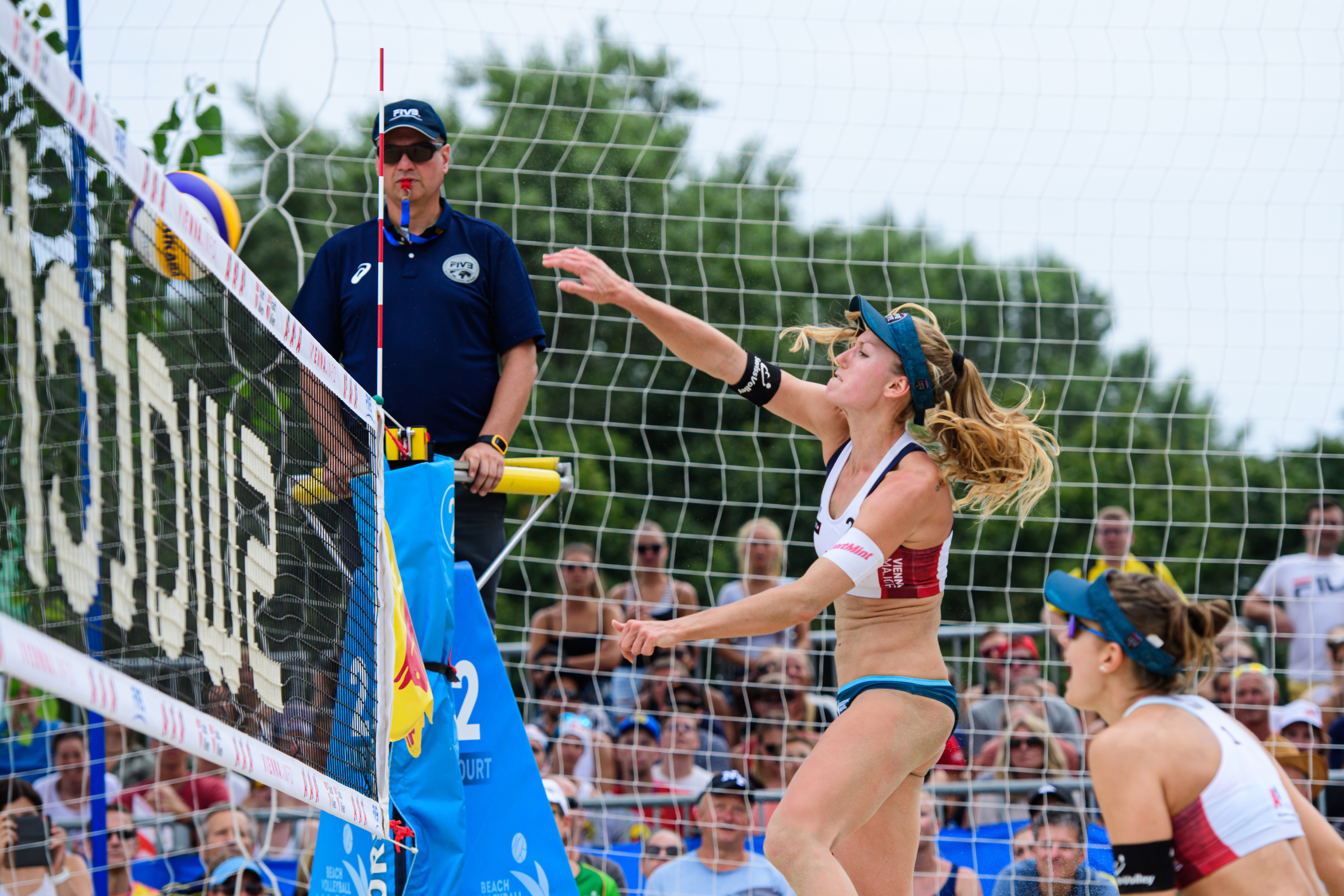 Swiss pair Tanja Huberli and Nina Betschart will be among the favourites in Jurmala.

Women’s European Championships preview
Favourites
Nina Betschart, Tanja Huberli, Switzerland
Margareta Kozuch, Laura Ludwig, Germany
Elsa Baquerizo, Liliana Fernandez, Spain
This is such a fascinating field on the women’s side, which has such a different landscape than the men. On the men’s side, maybe 95 percent of the best teams in the world hail from Europe. For the women, however, eight of the top 10 – including the top six – in the FIVB rankings are from other continents, and 15 of the top 20. One of those in the top 20, Karla Borger and Julia Sude, aren’t competing this week, due to an injury at the German Championships.
It’s another way of saying: this tournament is wide, wide open. Betschart and Huberli are as likely to win as any, given the streak of big finishes at the end of 2019, with a fourth in Hamburg and another fourth in Gstaad, followed by a fifth in Vienna. They weren’t knocked out by European teams in any of those three tournaments.
Germany, of course, danced its way from the 20 seed in Rome all the way to a gold medal to claim the World Tour Finals. Ludwig pulled out of the King of the Court with an injury, hopefully just to be cautious and remain ready for the European Championships this week. A healthy Ludwig would make her and Kozuch a favourite to medal in Jurmala.
The Spaniards, like the Swiss, also had a consistent 2019, particularly at the end, where they took back-to-back fifths to close the year in Moscow and Rome. Momentum is a powerful thing in sports, and Spain has it, especially with a strong showing at the King of the Court.
Contenders
Joana Heidrich, Anouk Verge-Depre, Switzerland
Marta Menegatti, Viktoria Orsi Toth, Italy
Svetlana Kholomina, Nadezda Makroguzova, Russia
Honestly, with how much parity there is in this event without the North and South American powers, it’s difficult to separate the contenders from the favourites. Heidrich and Verge-Depre are phenomenal, with a win at the Moscow four-star and a fourth in Rome, only narrowly losing bronze to Brazilians Rebecca Cavalcanti and Ana Patricia Silva. They finished fourth at this event a year ago, losing a white-knuckler for bronze to Spain’s Lili and Elsa, which goes to show that a gold here would not be a surprise to many, if any.
The Italians, too, have a high ceiling. Longtime partners Menegatti and Orsi Toth put together one of the most impressive side-out streaks at the King of the Court, a skill that typically translates well to winning volleyball matches in a standard format. They finished fifth here a year ago, losing only one match, a wild quarterfinal with Spain.
The Russians, meanwhile, are improving at a rapid rate, increasing their prize money in winnings by $23,000 in the past two years. Kholomina and Makroguzova have won a tournament in each of the past two seasons, the high coming on a gold at the Espinho four-star, where they won every match.
Dark horses
Kim Behrens, Cinja Tillman, Germany
Tina Graudina, Anastasija Kravcenoka, Latvia
Ekaterina Birlova, Evgeniya Ukolova, Russia
We’ve known, for a long time now, how good Birlova and Ukolova are. Two-time Olympians each, they’ve seen the game played at the highest level for as long as some, like Graudina, for example, have been playing the game at all. They know how to perform on big stages such as this.
With Graudina and Kravcenoka, however, there is much we still don’t know. They were the delightful surprises of the 2019 season, with Graudina jumping straight from the University of Southern California to the World Tour – and winning the Olympic qualifying tournament in Haiyang, China. Whether or not they can repeat that kind of success is yet to be seen. They’re young still, just 22 (Graudina) and 23 (Kravcenoka) years old, so their potential as individuals and a team is far from realized. How much they’ve improved in a season mostly devoid of tournaments will be a fun element to keep an eye on.
Behrens and Tillman have the most recent podium experience of any in this category. They took bronze at the German Championships a week ago, a repeat of their performance from 2019. Germany is one of the more formidable European federations, so it’s a good test coming into this week’s Championships.