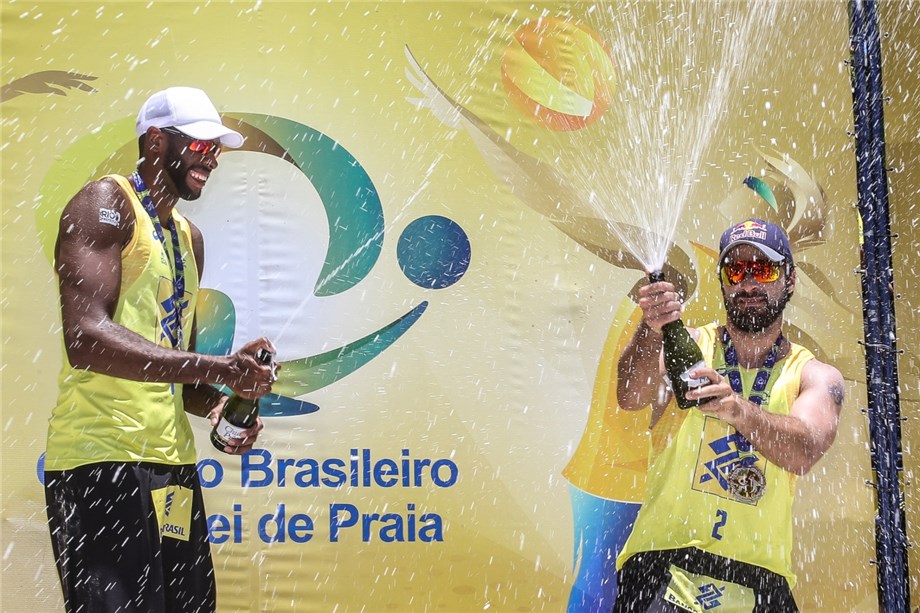 Maceió, Brazil, February 16, 2020 – After skipping the first event of the Brazilian Beach Volleyball Tour in January, the teams of Evandro Gonçalves/Bruno Oscar Schmidt and Ágatha Bednarczuk/Eduarda ‘Duda’ Lisboa enjoyed a perfect start to their seasons as they topped the podium at the second national tournament of the year this weekend in Maceió. Both teams are expected to be among the medal contenders at the Tokyo 2020 Olympics.
Evandro, a 2017 world champion, and Bruno, the reigning Olympic champion, defeated 45-year-old Ricardo Santos, an Athens 2004 Olympic champion, and Vitor Felipe in the hard-fought three-set (22-20, 19-21, 17-15) gold medal match at the Pajuçara Beach to celebrate their first title in 2020.
“It was very hot at the time of the match and we were forced to slow the rhythm of the game, which is not necessarily something we wanted,” Bruno explained. “That kind of game suits Ricardo better and they took advantage of it. It doesn’t matter how old he is, Ricardo is one of the greatest of all times and if he feels comfortable he’ll always be a tough opponent. I’m very proud that we managed to win even in such unfavorable conditions.” 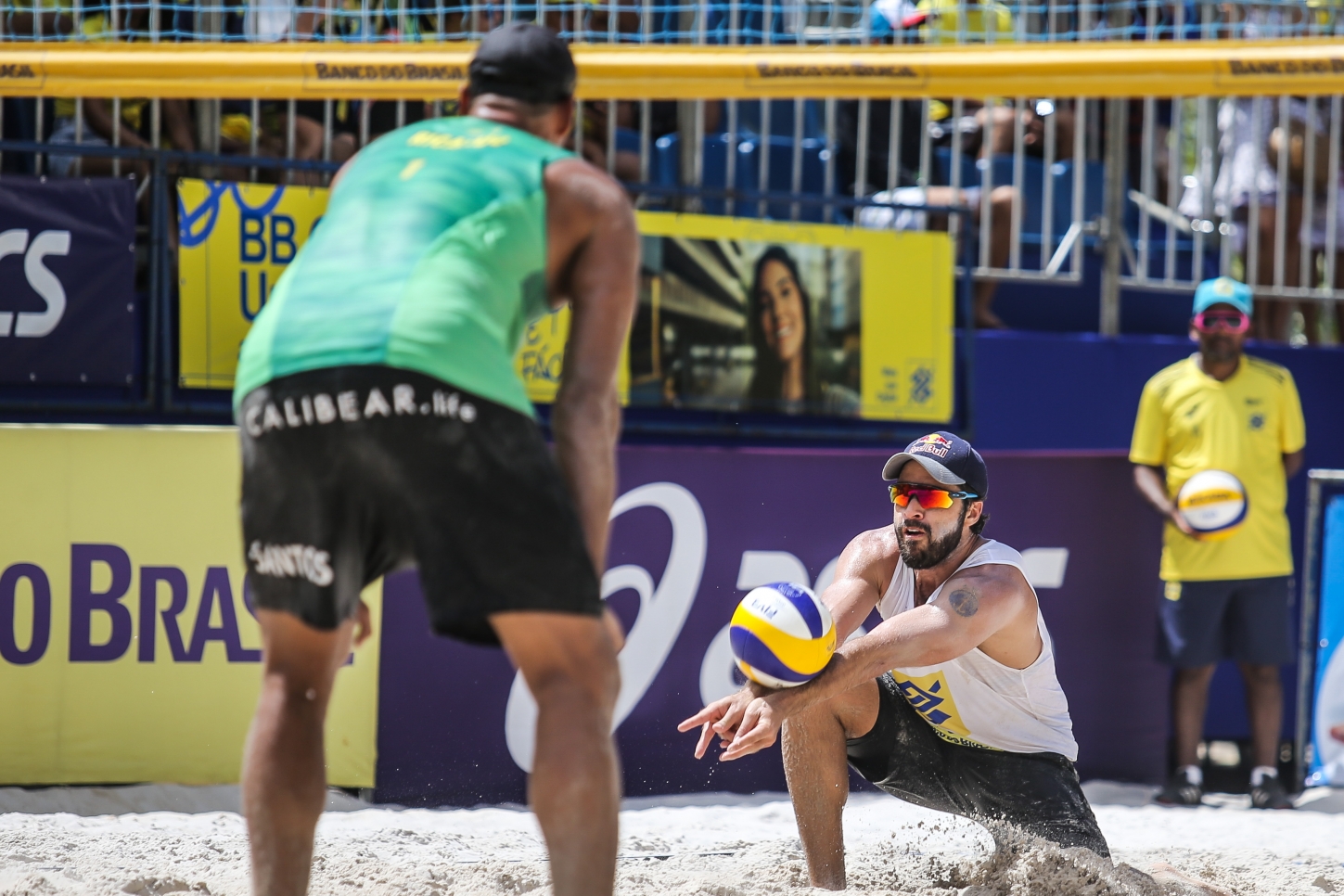 Bruno receives during the gold medal match while Ricardo prepares to block
André Loyola, who partnered with Evandro to win the 2017 FIVB World Championships, and George Wanderley finished third in Maceió after partner George Wanderley and him downed Rio 2016 Olympic champion Alison Cerutti and Álvaro Filho 2-1 (26-24, 12-21, 15-13) in the bronze medal match.
In the women’s tournament, Rio 2016 Olympic medallist Agatha and two-time FIVB World Tour Most Outstanding Player Duda also needed all three sets (23-21, 21-23, 15-12) to prevail over up-and-coming Tainá Bigi, 24, and Victoria Lopes, 20.
The match had a special feeling for Duda, who paired with both Tainá and Victoria to win FIVB Youth World Championships in 2013 and 2016, respectively. Additionally, the young team is coached by Duda’s mother, former player Cida Lisboa.
“We know we’re nowhere near our best forms physically, mentally or technically,” she reflected. “So wining this gold medal took us a lot of patience and determination. It will be a long season and we still have a lot ahead of us, but to start it winning this tournament, and specially playing against the team my mother coaches and two great friends, it’s just great.”
Taiana Lima and Fernanda Berti, who won the silver medal at the 2015 FIVB World Championships and recently reunited, secured bronze with a 2-1 (16-21, 25-23, 15-12) win over Brazilian Tour leaders Ana Patrícia Ramos and Rebecca Cavalcanti.
The Brazilian Tour continues with the sixth of the seven events scheduled for the 2019-2020 season from March 4-8 in Aracaju.
Related article:
Rebecca/Ana Patricia and André/George victorious on Brazilian Tour
More volleyball from Brazil:
Cachopa guides Sada Cruzeiro to seventh South American title
Martínez keeps Praia Clube at the top of the Brazilian Superliga
Zé Roberto expects challenging start for Brazil at Tokyo 2020
Thaisa back in top form with Itambé Minas
Quick links:
FIVB Beach Volleyball World Tour
FIVB.com - Beach volleyball
Facebook
Twitter
Instagram