Fendrick returns for another Olympic try

Siem Reap, Cambodia, February 6, 2020 - Eight months after giving birth to a baby girl, Rio 2016 Olympian Lauren Fendrick has returned to competitive beach volleyball. The 37-year-old American and partner Sara Hughes are the No. 1-seeded pair at the FIVB Beach Volleyball World Tour event in Siem Reap, with main draw action beginning on Friday.
“Right now, for Lauren and me, we are putting our heads down and working as hard as possible to make a run for 2020,” Hughes told Travis Mewhirter on volleyballmag.com on January 9.
“We’re very focused on our team and our goals," added Hughes about qualifying for the Tokyo 2020 Olympic Games.  "I’m very excited to be on the court with a former Olympian with all of her experience and how dedicated she is to getting better and wanting to be one of the best teams in the world.”
The 24-year-old Hughes started the Tokyo 2020 Olympic qualifying process with Summer Ross and the pair compiled 4.380 points in nine events highlighted by a fifth-place at the 2019 FIVB World Championships in Germany where the pair eliminated Germans Margareta Kozuch/Laura Ludwig before being ousted by compatriots Alix Klineman/April Ross.
However, back problems sidelined Ross for the rest of the 2018-2019 season before she returned to play one last time with Hughes in late October in China where the duo placed ninth by winning two of three matches before losing to American rivals Kelley Larsen/Emily Stockman.
“Sights are set full focus on 2020,” Hughes wrote on Instagram. “Bring it on.”
Fendrick, who is married to Stanford University beach volleyball coach Andrew Fuller and gave birth on June 3 to daughter Willa Jaye, and Hughes, must compete in 12 FIVB World Tour events before the close of Tokyo qualifying in June at a tournament in Rome.
Before finishing in second place at the 2017 FIVB World Championships in Vienna with April Ross, Fendrick competed in the Rio 2016 Olympics with Brooke Sweat where the pair lost three pool play matches. Sweat is now paired with Kerri Walsh Jennings and currently ranks second among American women in Tokyo qualifying behind April Ross and Klineman. 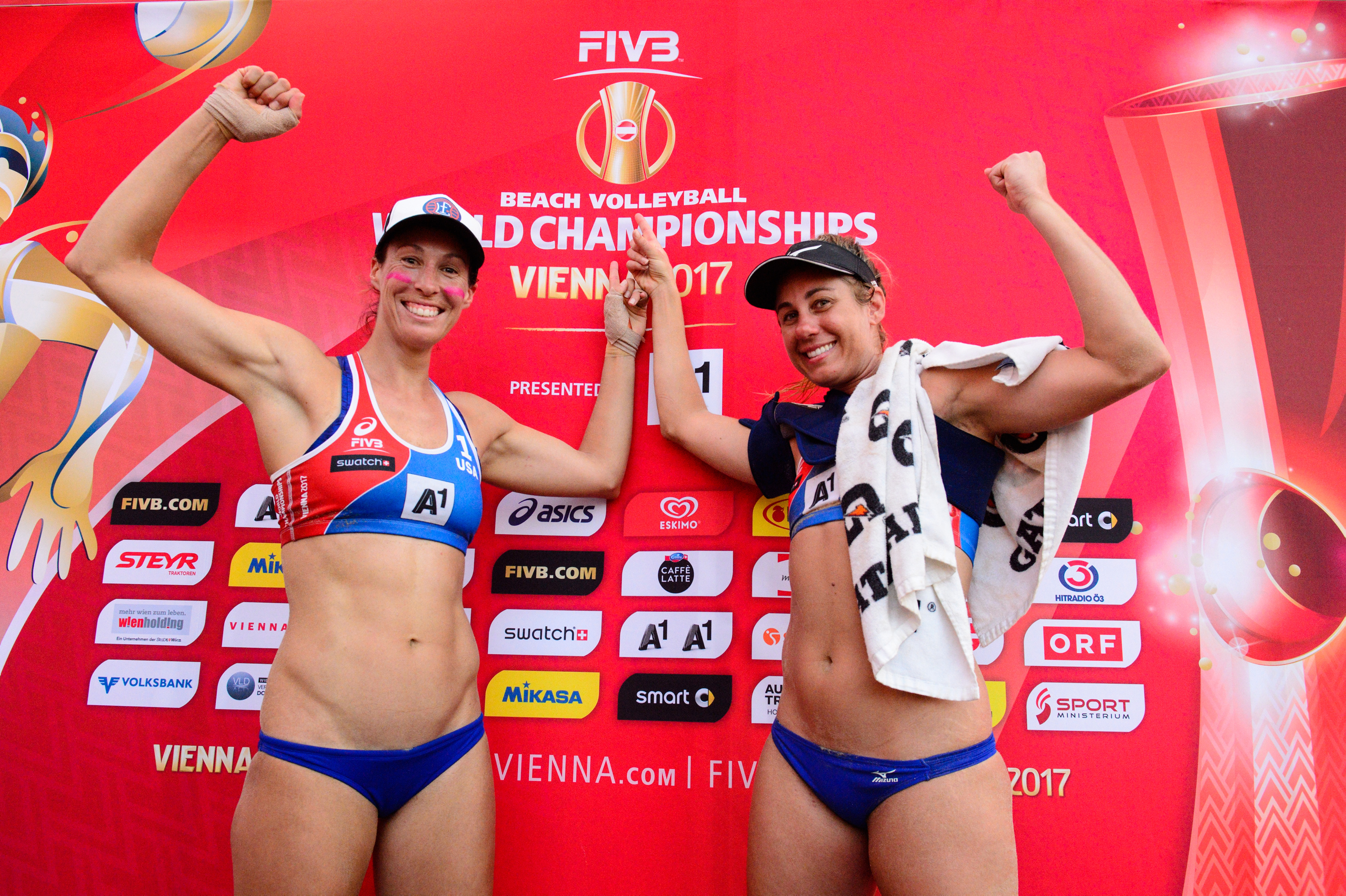 Lauren Fendrick (left) and April Ross placed second at the 2017 World Championships.
Fendrick last played competitively at an American domestic event in September 2018 with Nicole Branagh. Prior to Friday's match with Hughes in the Anchor Beach Volleyball Carnival in Siem Reap, Fendrick's last World Tour competition was August 2008 in Moscow with Sarah Sponcil.
Hughes had planned to return to play earlier in the Olympic qualifying process with Fendrick, who said in a beachmajorseries.com article in August that she “initially thought I could be ready a lot sooner, but Willa was two weeks late and I underestimated the toll that birth can take on the body. I have been training the whole time. Modifications had to be made but there was never a point where I wasn’t doing anything. I had a pretty crazy birth, so initially I had to focus a ton on healing - more so than I had imagined, but I was still doing some sort of preparation.”
The Anchor Beach Volleyball Carnival is the second FIVB World Tour event for the Fendrick/Hughes partnership with the first being in February 2012 at an American stop in Fort Lauderdale where the pair placed ninth with a 3-2 match mark with both setbacks to Brazilian Olympic teams (2016 participants Talita Antunes/Larissa Franca and 2020 contestants Agatha Bednarczuk/Eduarda "Duda" Lisboa).
This website uses cookies to ensure you get the best experience on our website. For more information please read our Cookies Policy.
Ok