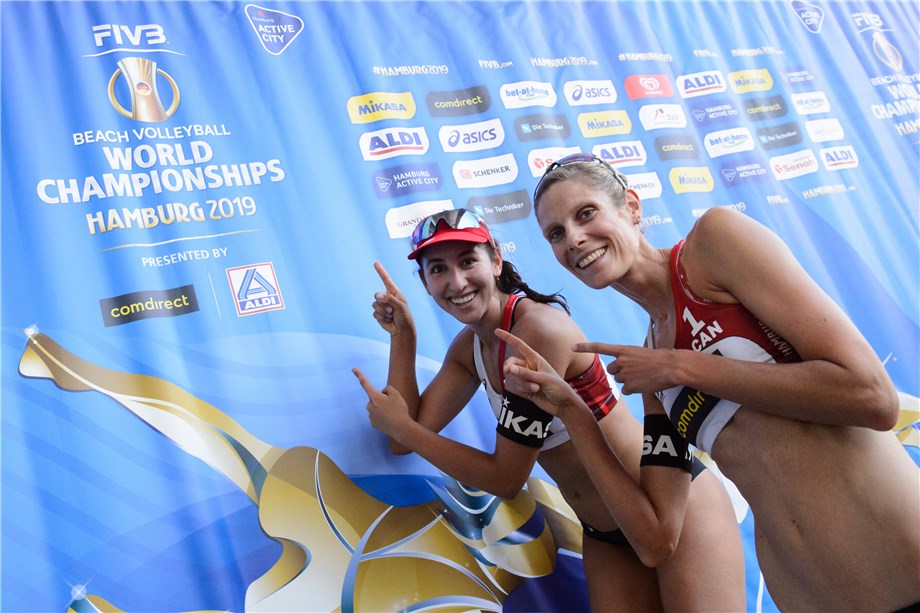 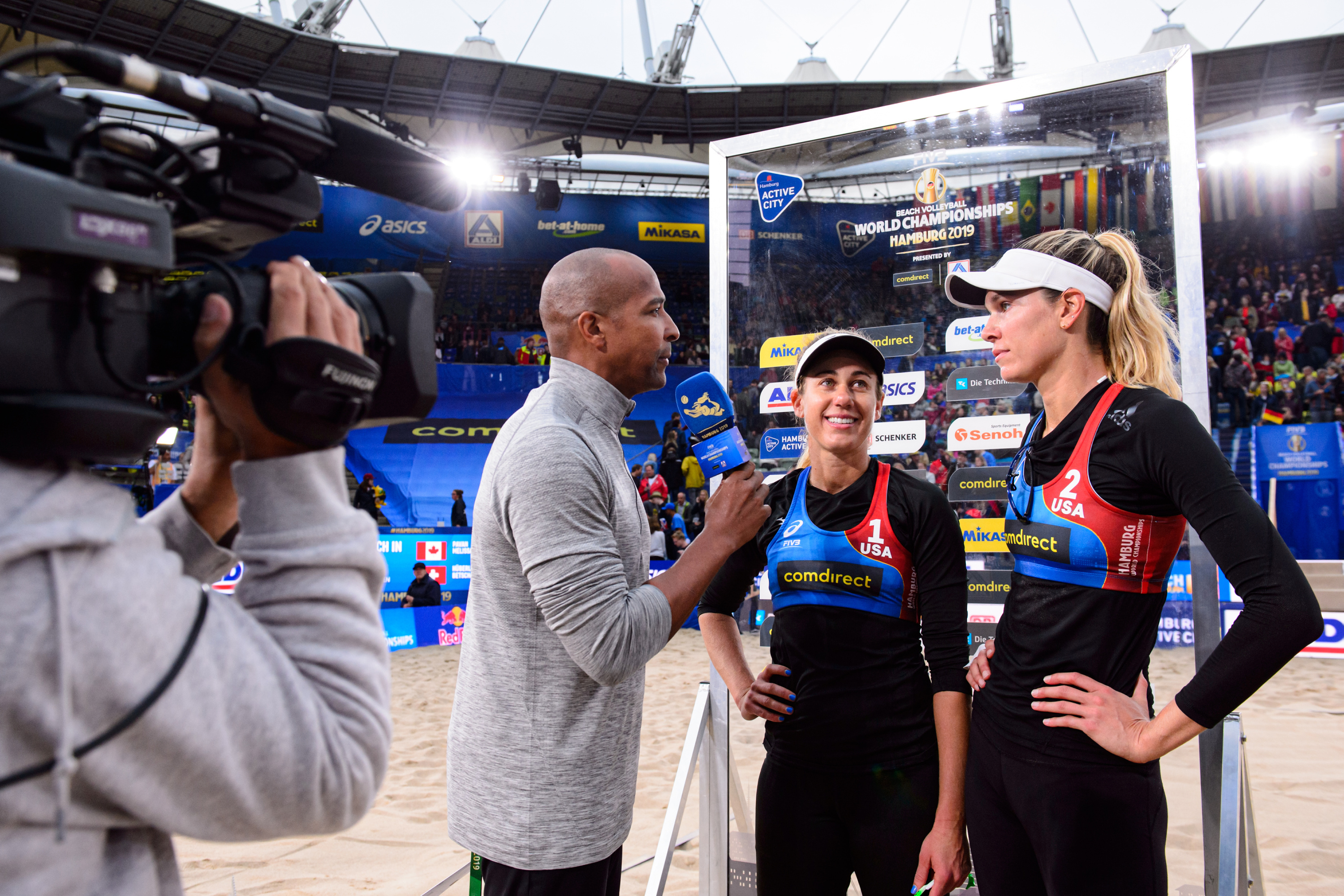 Sydney 2000 Olympic gold medal winner Dain Blanton (left) interviews April Ross (center) and Alix Klineman.
The men open play Saturday will quarter-final matches at 10:30 a.m. on two courts where two American and two Italian teams among the "elite eight" at the US$1-million FIVB World Championships presented by comdirect and ALDI Nord along with pairs from Brazil, Germany, Norway and Russia.
The Canada versus United States women's finale is the fifth meeting between the two teams with Humana-Paredes and Pavan defeating the Americans twice last season in the United States and Switzerland in elimination matches.  Klineman and Ross avenged those setbacks this season with a semi-final in China and a gold medal victory in Brazil.
Both teams will be seeking their fourth FIVB World Tour titles as Humana-Paredes and Pavan are the first Canadian men's or women's team to win a world championship medal.  Klineman and Ross appearance in the finals guaranteed the United States its 16th podium placement at the prestigious event and 11th for women.
Ross has also earned her third trip to a world championship gold medal match as she claimed the title 10 years ago with Jen Kessy in Norway and placed second at the 2017 event in Austria with Laureen Fendrick.  Ross also placed fourth at the 2013 world championships with Whitney Pavlik in 2013 at Stare Jablonki, Poland.
Canada holds a 2-1 edge over the United States in women’s gold medal World Tour matches with the Americans only win being a Klineman/Ross victory over Humana-Paredes/Pavan in mid-May at the Itapema Open in Brazil.  Canadians bested Americans twice last season in World Tour finales at stops in China and Mexico.
With the gold medal winners sharing the $60,000 first-place prize and a spot for their country in the Tokyo 2020 Olympic Games, the women's third-place game featured seventh-seeded Mariafe Artacho/Taliqua Clancy of Australia against 17th-seeded Nina Betschart/Tanja Huberli of Switzerland at 1 p.m. 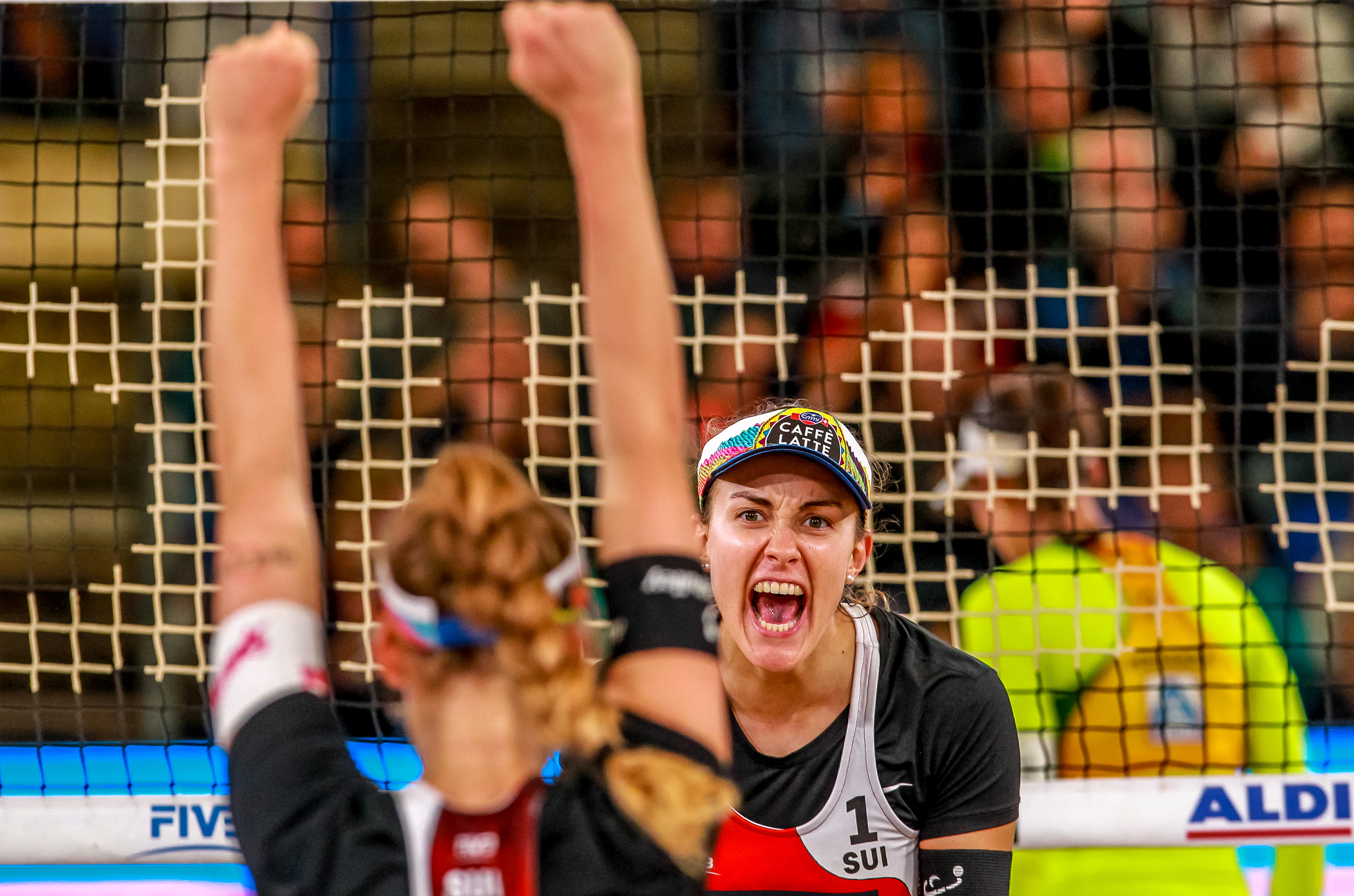 Quarter-final excitement Friday for Tanja Huberli (No. 1) of Switzerland
Artacho and Clancy, the world No. 2-ranked women's team, will be playing the Swiss for the first-time on the FIVB World Tour.  The Australians entered the world championships by winning their fifth FIVB gold medal three weeks ago in Poland.  Betschart and Huberli are playing in their fifth World Tour "final four" as the Swiss have finished third four times.
The Australians will be seeking their country's third world championship medal and second for women with Betschart and Huberli being the first Swiss women's team to reach the world's semi-finals.  The European country had previously placed second in the men's world championships in 1999 and 2005.
The men's featured men's quarter-final match will be played first on Rothenbaum center court as seven-time World Tour gold medal winners and top-seeded Anders Mol and Christian Sorum are challenged by eighth-seeded Daniele Lupo and Paolo Nicolai of Italy at 10:30 a.m. 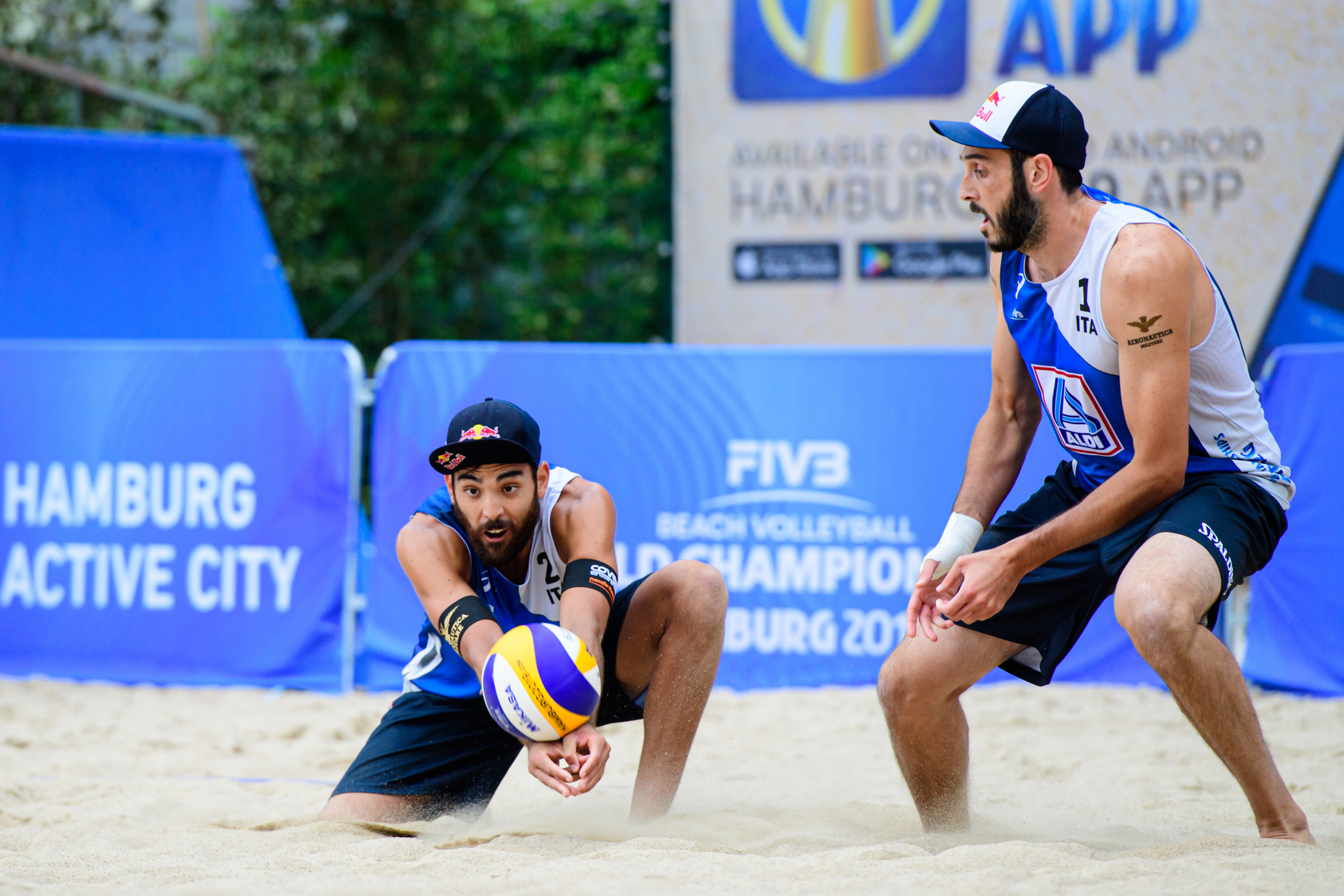 Olympic silver medal winners Daniele Lupo (left) and Paolo Nicolai of Italy
The Norwegians will be looking for their third FIVB win in as many meetings with Lupo and Nicolai, the second-place finishers at the Rio 2016 Olympic silver medal and three-time World Tour gold medal winners.  Mol and Sorum defeated the Italians three weeks ago in Poland in a Warsaw quarter-final match.
Also playing at 10:30 a.m. Saturday for a spot in the semi-finals will be 13th-seeded Tri Bourne/Trevor Crabb of the United States against 17th-seeded Andre Loyola/George Wanderley of Brazil.  Andre will be seeking his second trip to the "final four" at the world championships after he captured the gold medal at the 2017 Vienna Worlds with Evandro Goncalves.
The last two men's quarter-final matches are scheduled to start at 11:45 p.m. with host country favorites and 12th-seeded Julius Thole/Clemens Wickler meeting sixth-seeded Phil Dalhausser/Nick Lucena of the United States on center court with third-seeded Viacheslav Krasilnikov/Oleg Stoyanovskiy of Russia being challenged by 45th-seeded Adrian Carambula/Enrico Rossi of Italy.
Dalhausser captured the gold medal at the 2007 world championships with Todd Rogers in Switzerland as the pair also placed third in 2009 at Stavanger, Norway.  Carambula and Rossi, the last entry into the men's field after a late withdrawal by a team for Sierra Leone, are seeking to become the second-straight 45th-seeded team to reach the world championship "final four". 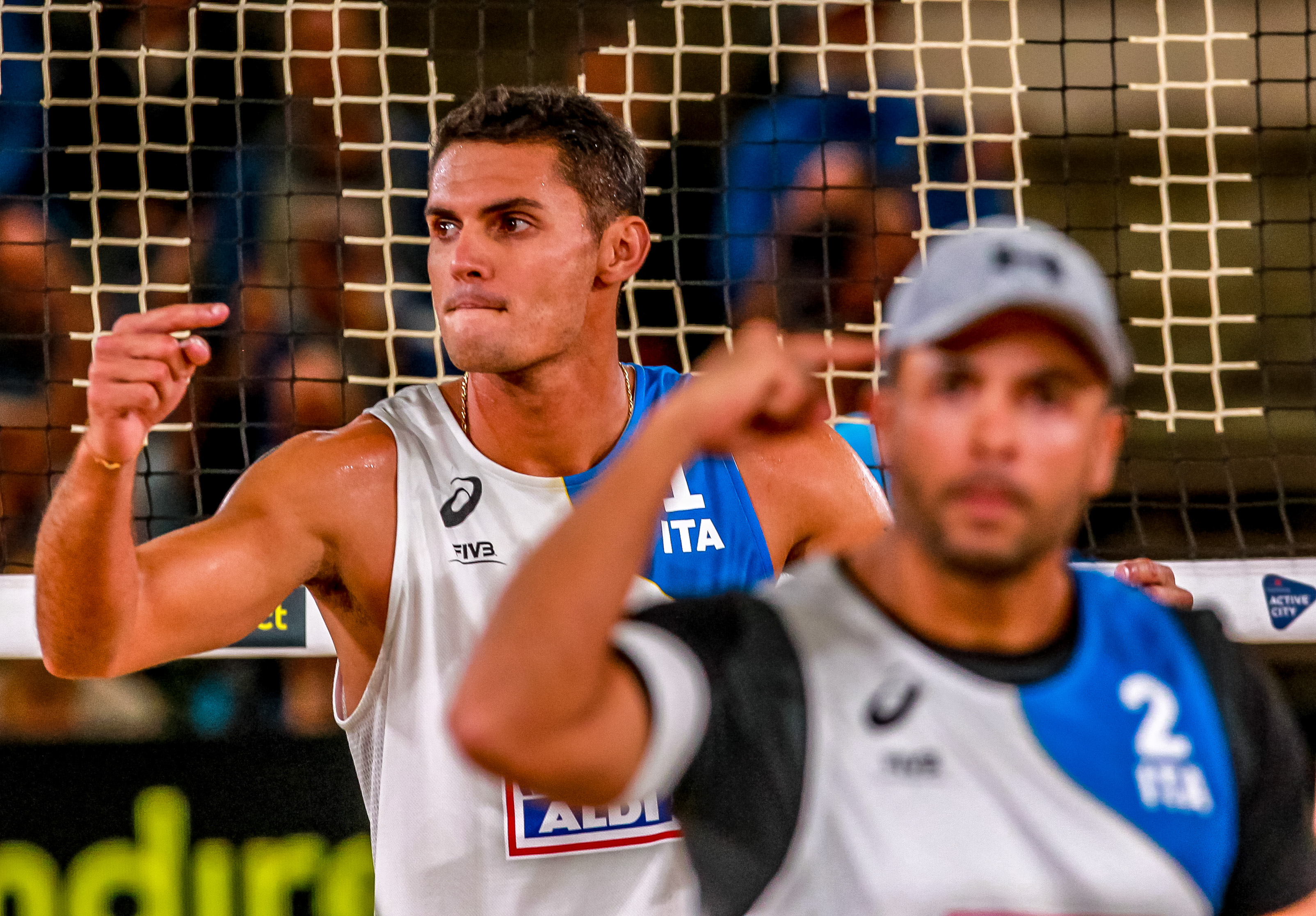 Enrico Rossi (left) celebrate a point with Italian partner Adrian Carambula
Maarten Van Garderen and Christiaan Varenhorst accomplished the feat of being the lowest seeded men's team to reach a world championship semi-final as the Dutch pair dropped the 2017 bronze medal match at Vienna to Krasilnikov and Nikita Liamin.
The men's medal matches concluded the 12th edition of the FIVB World Championships Sunday with the third-place contest set for 12:30 p.m. with the "first serve" of the finale scheduled for 2 p.m.