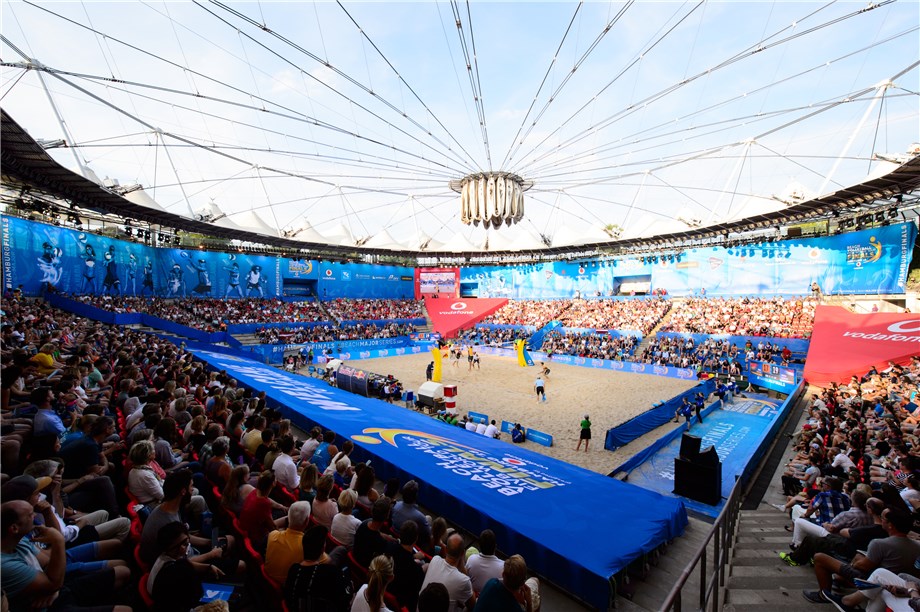 With 10 matches each being played Friday on the two side courts, the Rothenbaum main stadium will feature five German teams led by Rio 2016 Olympic champion Laura Ludwig and her new partner Maggie Kozuch playing 15th-seeded Kelley Larsen and Emily Stockman from the United States in a 6 p.m. Pool J match. 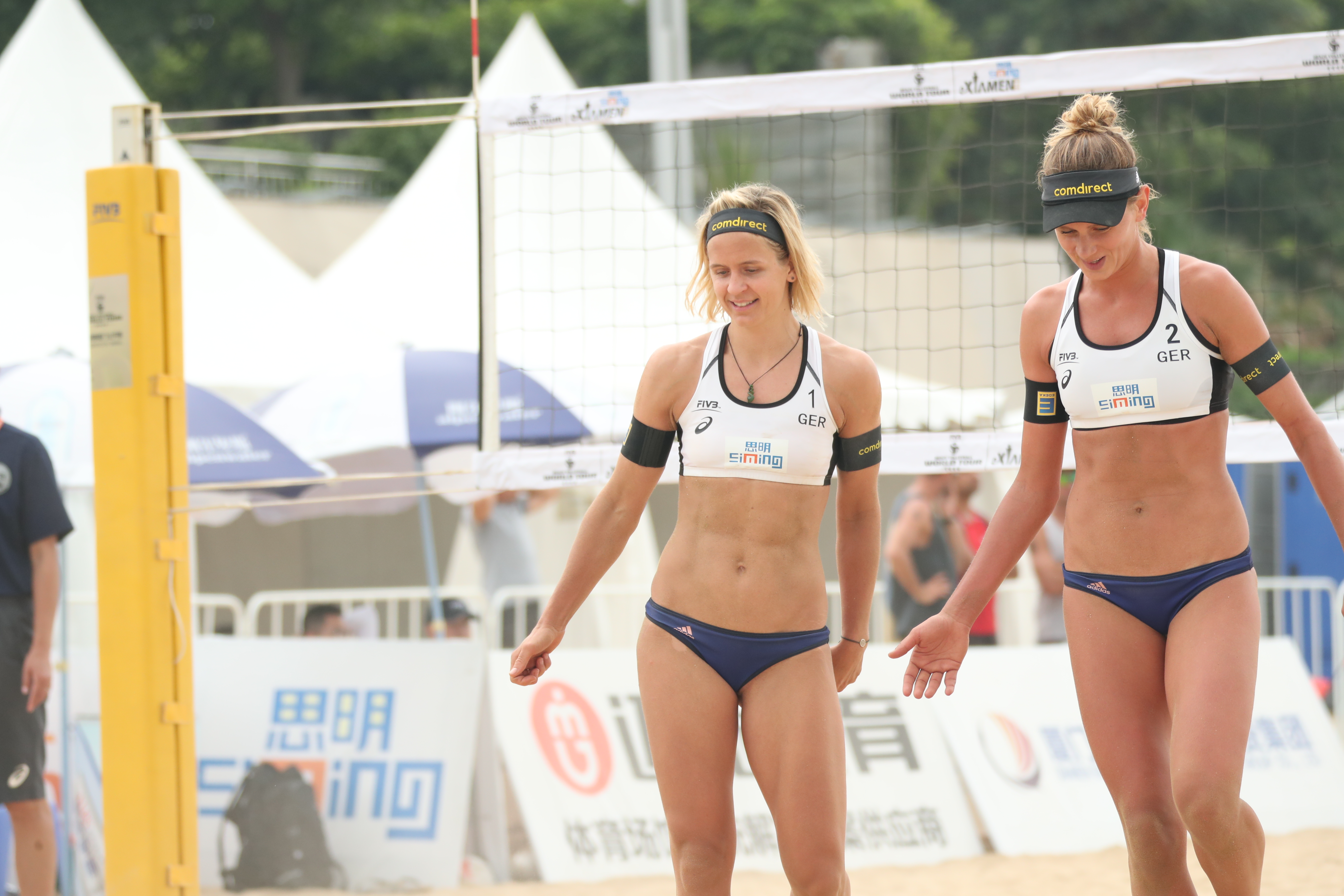 Laura Ludwig (left) and Maggie Kozuch of Germany
Ludwig, who captured the 2017 FIVB World Championships in Vienna with her Rio Olympic partner Kira Walkenhorst, and Kozuch will be meeting the Americans for the second time this season after Larsen and Stockman posted a 2-0 (21-15, 21-19) elimination win over the Germans two weeks ago in Warsaw, Poland.
While the 34th-seeded Germans placed ninth in Warsaw to match their season best finishes together, Larsen and Stockman advanced to the finals in the Polish capital where the Americans lost the gold medal match to Mariafe Artacho/Taliqua Clancy of Australia.
Larsen and Stockman, who are competing in their 16th FIVB event together after forming their partnership in April 2018, validated their Polish medal by winning last week's American domestic event. During their run to the podium in Warsaw, Larsen and Stockman also defeated Agatha Bednarczuk/Eduarda "Duda" Lisboa of Brazil, the No. 1-ranked women's team in the world ranking. 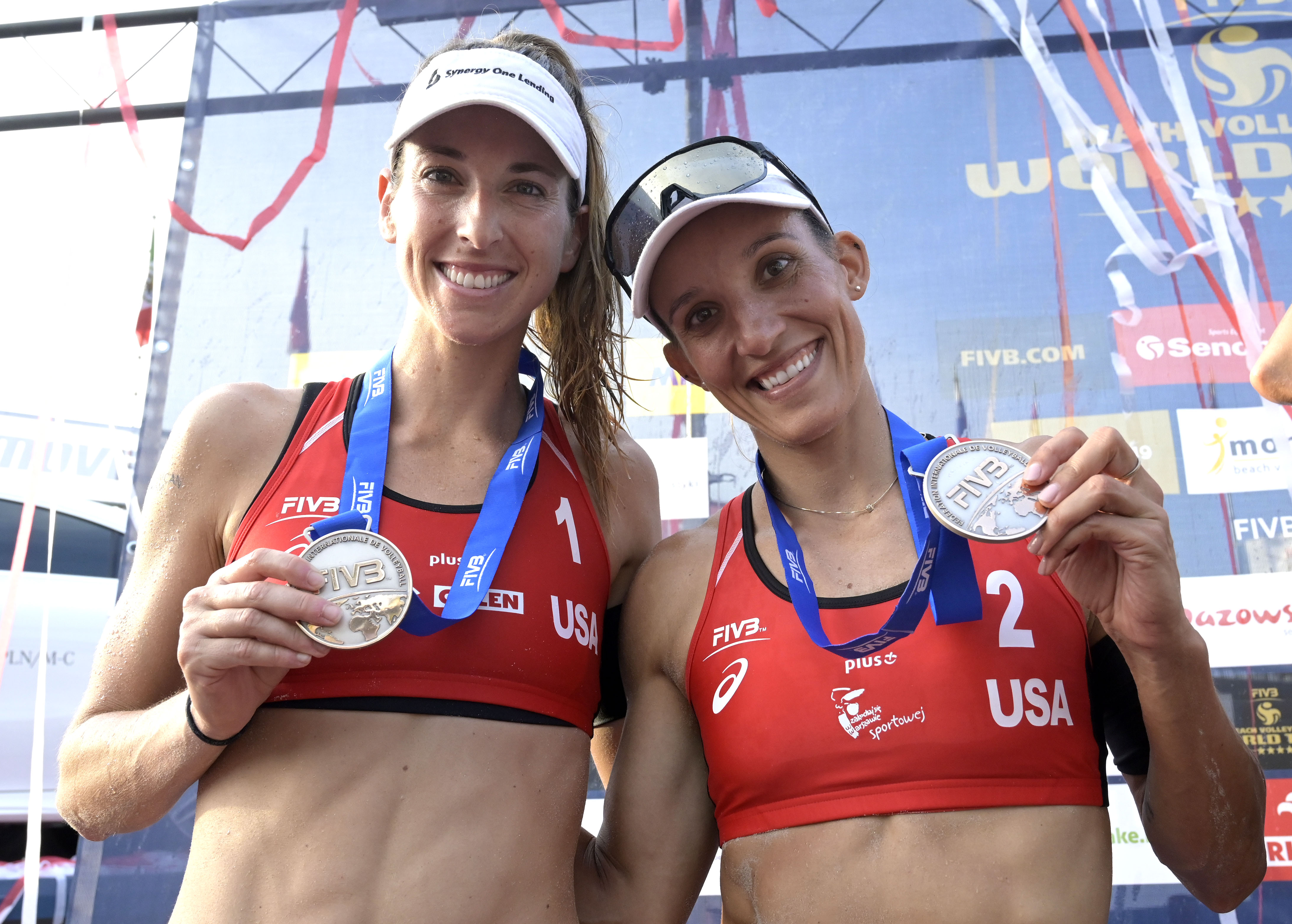 Americans Kelley Larsen (left) and Emily Stockman
Agatha and Duda, who captured the women's 2018 FIVB World Tour Finals last August on the Rothenbaum centre court, also open play Friday as the sixth-seeded Brazilians meet 43rd-seeded Mailen Deliz/Leila Martinez of Cuba in a 12 p.m. court No. 2 match. Like their male counterparts, Deliz and Martinez earned their World Championship berths via the continental pathway as the two Cuban pairs have combined to win eight NORCECA events in the past two seasons.
Friday's next to last match on the Rothenbaum centre court will feature the top-ranked men's team of Anders Mol and Christian Sorum as the Norwegians begin 2019 World Championship play with a 7:15 p.m. match against 48th-seeded Sergio Gonzalez and Luis Reyes of Cuba.
Mol and Sorum, who have been ranked as the No. 1 men's team for 47 straight weeks, have topped World Tour podiums in seven of their last 10 FIVB appearances highlighted by a 2018 gold medal win on the Rothenbaum centre court on August 18 over Poland's Michal Bryl/Grzegorz Fijalek at the FIVB World Tour Finals. 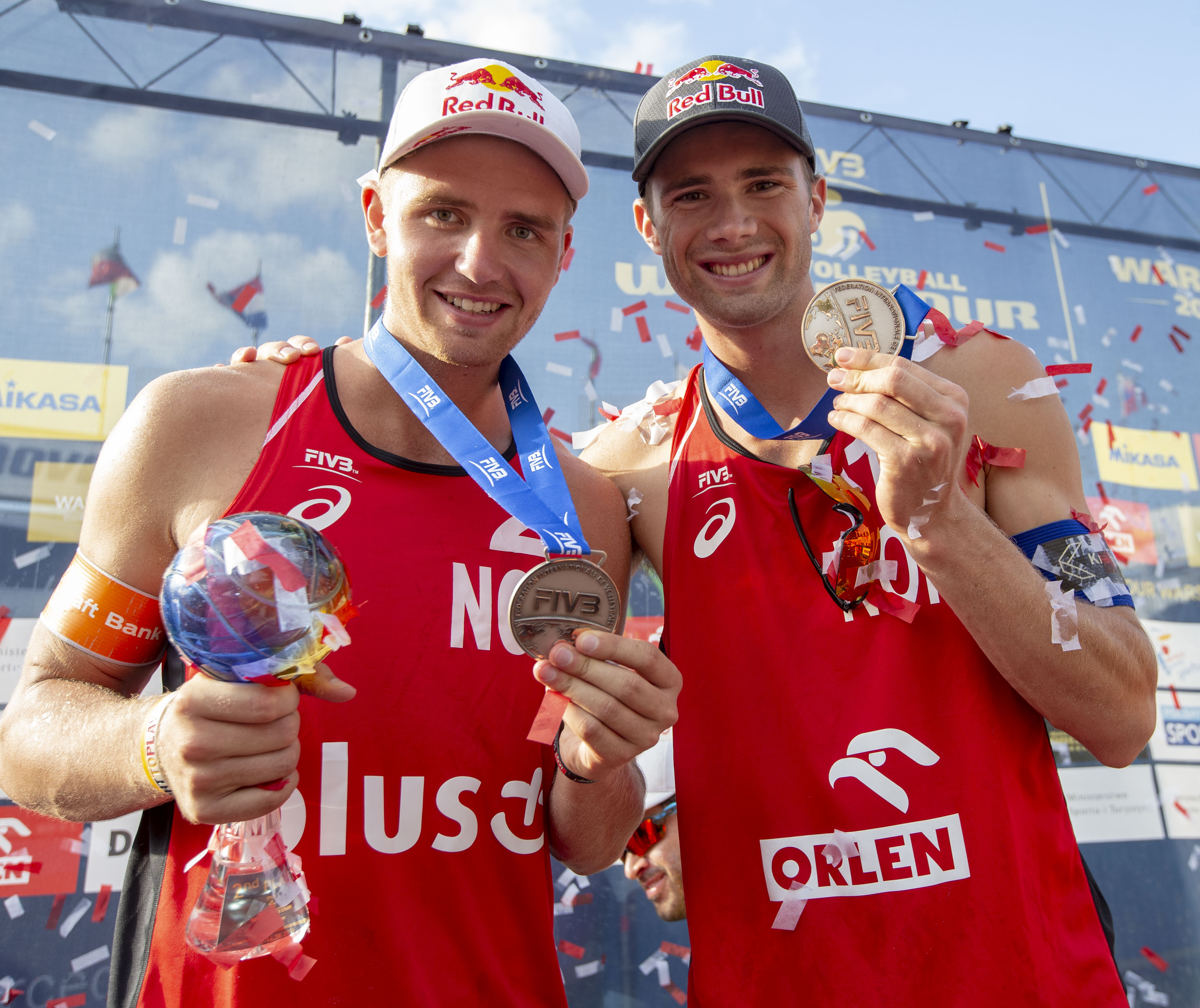 Norwegians Christian Sorum (left) and Anders Mol
When play opens at 10 a.m. on Friday, former FIVB men’s world champions from 2007 and 2013 will be in action on the Rothenbaum side courts in men's Pool F, which is considered one of the toughest pools at this year's championships.
Phil Dalhausser, who captured the 2007 world title with Todd Rogers, and Nick Lucena of the United States are seeded sixth and meet 43rd-seeded Julian Azaad/Nicolas Capogrosso of Argentina on court No. 3. The Americans have won both previous meetings with Azaad and Capogrosso, including a pool play win two weeks ago in Warsaw.
Alexander Brouwer and Robert Meeuwsen of the Netherlands, who are seeded 19th, are challenged by 30th-seeded Grant O'Gorman/Ben Saxton of Canada in the other Pool F match at 10 a.m. Friday. The 2013 FIVB world champions, Brouwer and Meeuwsen will be seeking their second win over the Canadians as the two teams will be meeting for the first time since April 2018. 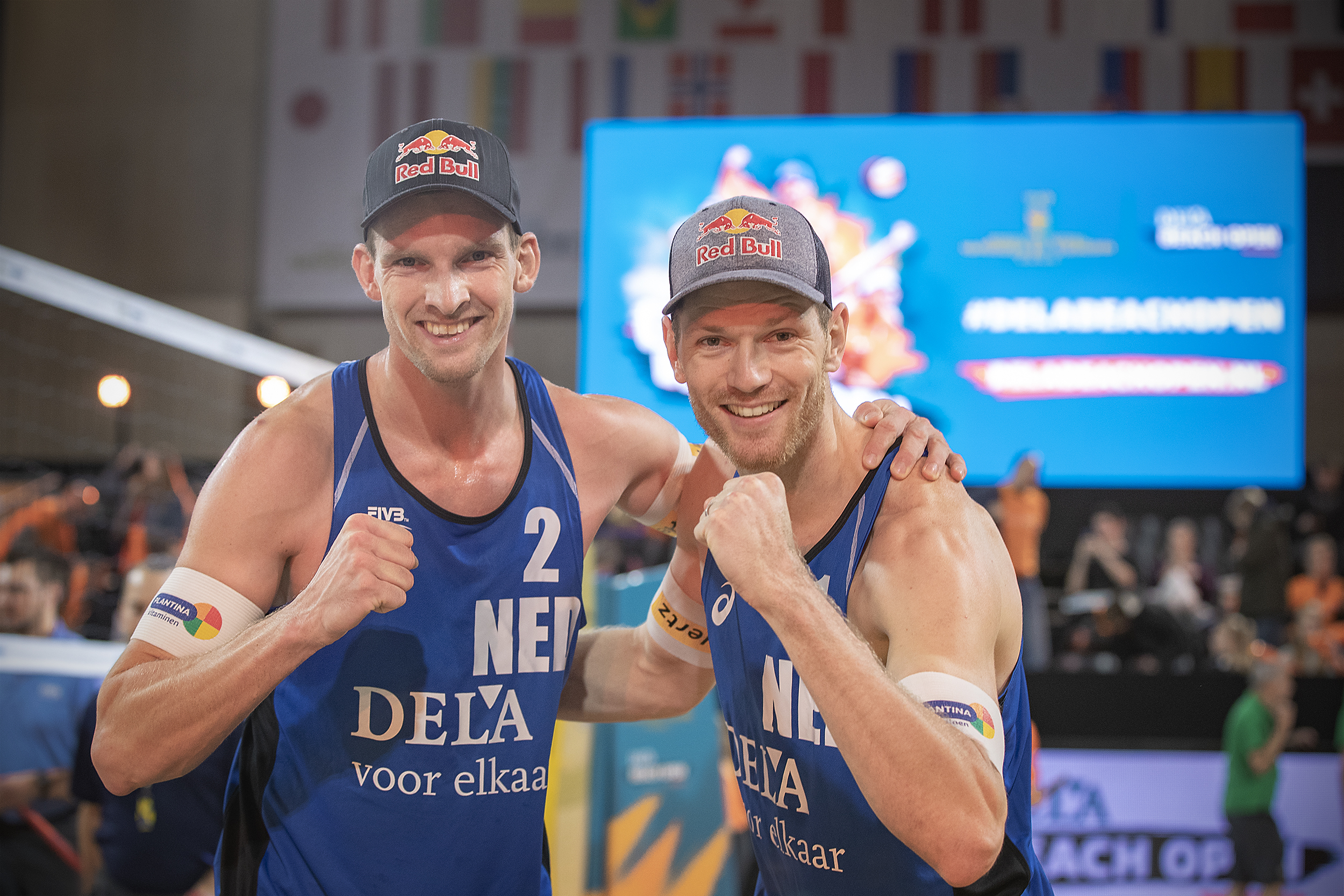 Dutchmen Robert Meeuwsen (left) and Alexander Brouwer
The 12th edition of the FIVB World Championships concludes with the women's medal matches on July 6 with the men's finale set for July 7 as the winning teams will share the $60,000 first-place prizes.