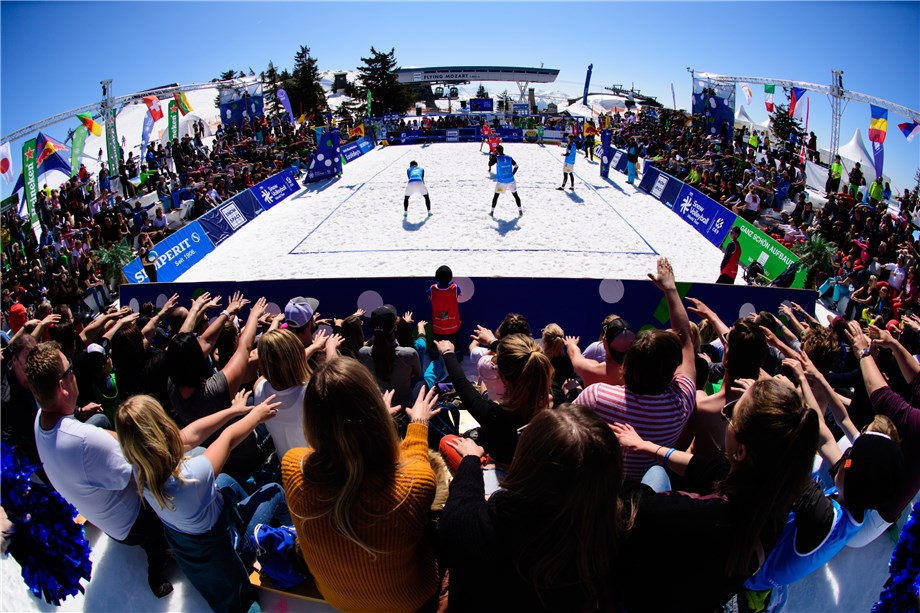 Lausanne, Switzerland, February 10, 2020 – The FIVB today announced the second edition of the Snow Volleyball World Tour, which features stops in Turkey and Argentina and will connect more people with the sport than ever before.
The World Tour will begin on March 12-15 at Kayseri-Erciyes Ski Center, one of Turkey’s biggest and most famous ski resorts. The FIVB has signed an agreement with the Turkish Volleyball Federation for Turkey to host the first event of the Word Tour for the next three years, allowing the federation to build a high-quality event that will become a staple of the snow volleyball calendar. Turkey has strong snow volleyball credentials having hosted CEV Snow Volleyball Tour events before and its women’s national team won silver at  the 2018 European Snow Volleyball Championships in Wagrain. 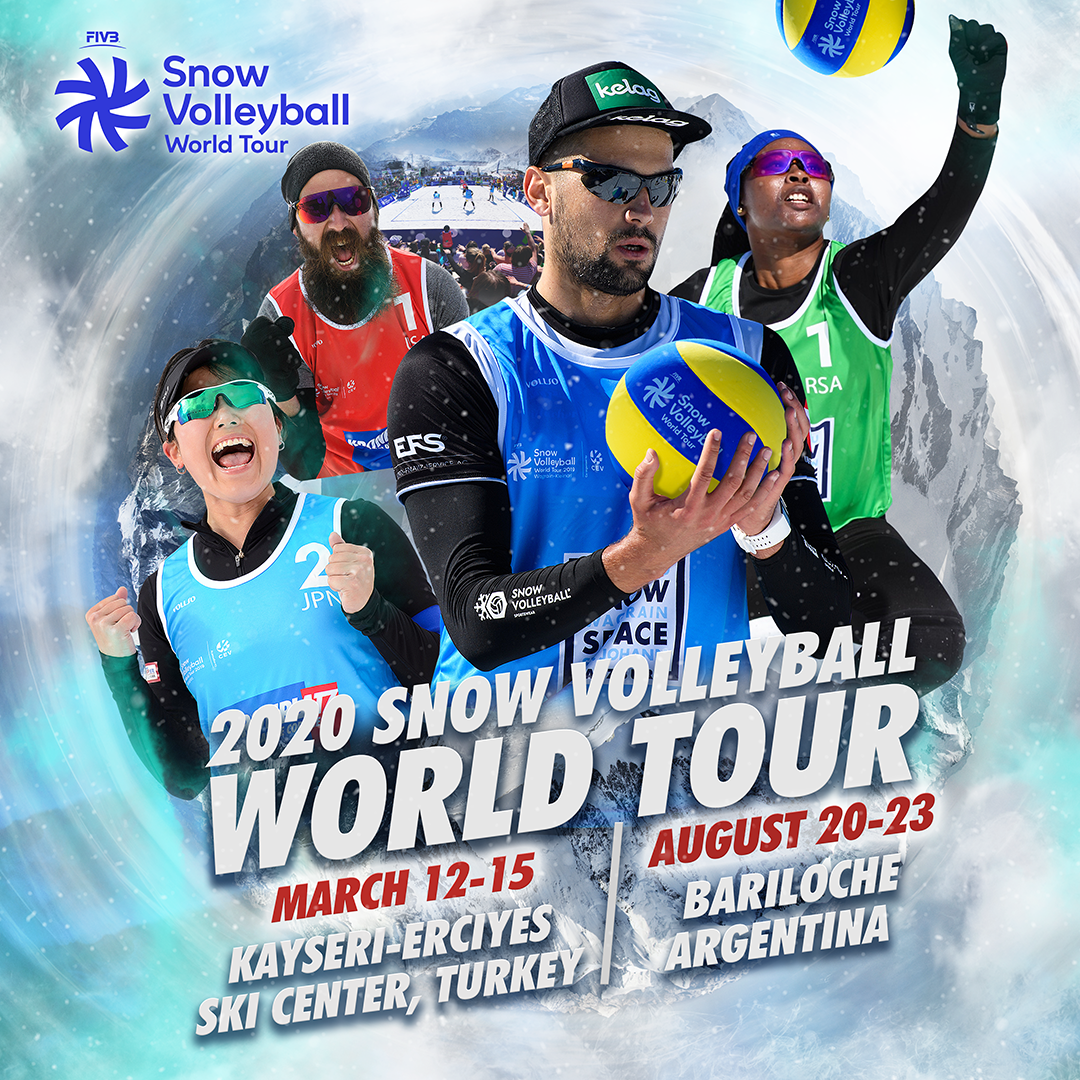 Snow volleyball athletes will be familiar with the region of Bariloche in Argentina, which hosted an event on the inaugural World Tour last year and will once again host an event this year on August 20-23. In 2019, Argentina participated in every event on the Snow Volleyball World Tour, with both the men’s and women’s teams successfully reaching the podium at some point during the season. The women's teams were consistently challenging for medals, finishing with one silver and three bronze, while the men's team triumphed in the final leg of the Tour, taking gold in front of their home fans in Bariloche. Their spectacular final against the USA was broadcasted on NBC and the Olympic Channel among others. 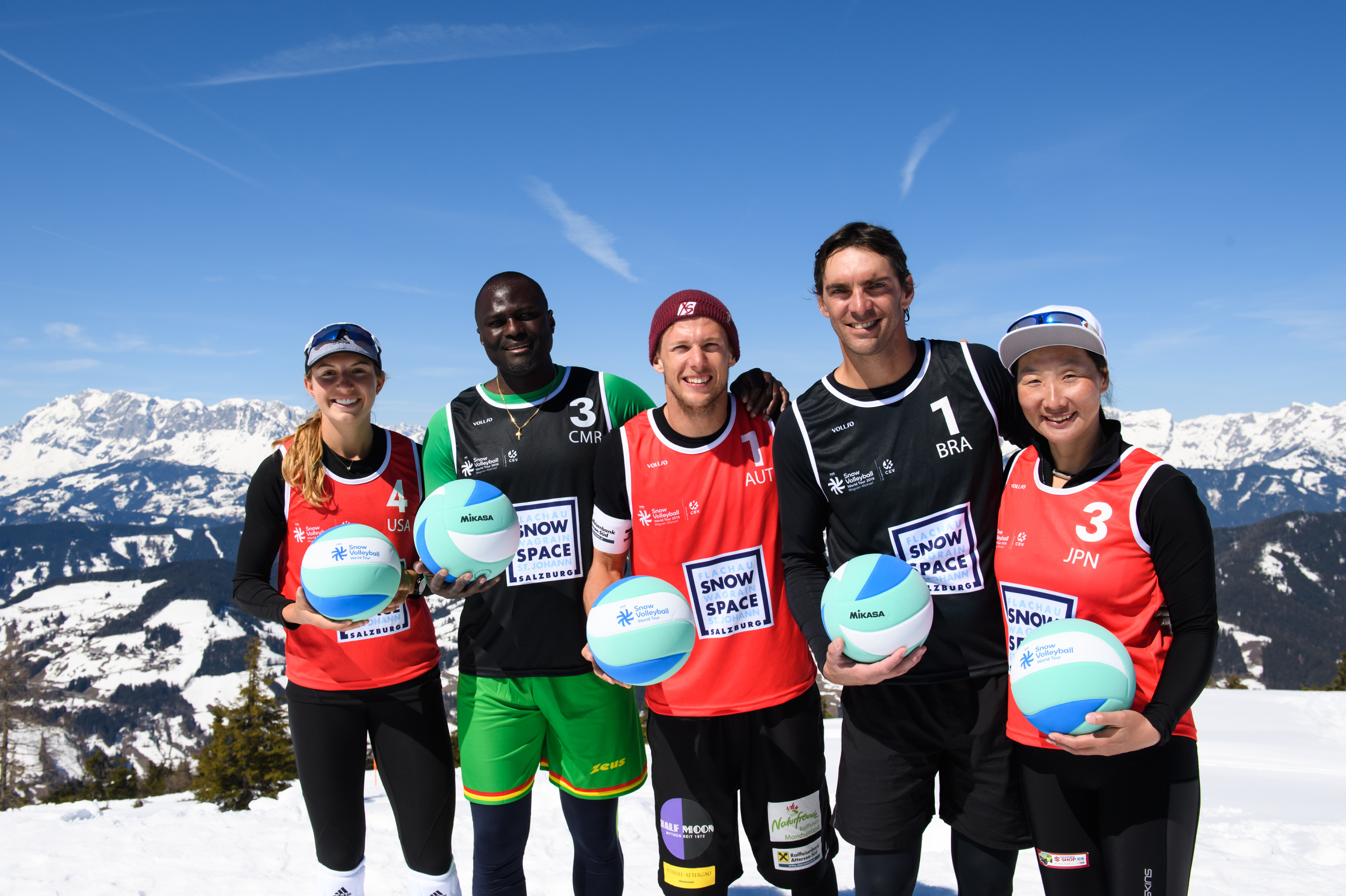 Snow volleyball players from all five continents together on the inaugural World Tour
The FIVB is still considering a number of applicants to host legs on the Tour in 2020, and further announcements will be made in due course. In addition, all matches will be broadcast live on YouTube for snow volleyball fans around the world. Registration for all teams hoping to take part in the event in Turkey is open through the Volleyball Information system.
Following the announcement, FIVB President Dr Ary S. Graça Fᵒ said:
“This is another huge step for the growth of snow volleyball. In every country that we have hosted events, athletes and fans have loved the skill, athleticism and atmosphere of snow volleyball.
“We are now taking the Tour to Turkey for the first time and returning to Argentina, and both countries provide us with a great opportunity to reach new fans. Our goal with snow volleyball was to create a volleyball discipline suitable for northern hemisphere countries to play, as well as a chance for traditionally summer-sport nations to take part in winter sport. Snow volleyball is a pathway for more people to enjoy sport globally, and this is a very exciting development for us.”
The FIVB launched the first-ever Snow Volleyball World Tour last year. Teams from all five Continental Confederations participated, showing the appetite from typically summer nations to engage in winter sport.
In recent years, working in collaboration with the European Volleyball Confederation (CEV), the FIVB staged a number of high-profile snow volleyball events, including Snow Volleyball Night in 2018. With the support of the Austrian Olympic Committee, Snow Volleyball Night was hosted outside Austria House during the PyeongChang 2018 Olympic Winter Games and attracted the attention of a number of high-profile IOC Members as well as the world’s media.
Just last month, the FIVB hosted Snow Volleyball Festival in the mountainous region of Villars-sur-Ollon in the Swiss Alps. The snow volleyball court was packed for the two-day event as young people and families from Switzerland and around the world experienced the new and exciting sport at the time of the Lausanne 2020 Winter Youth Olympic Games. A number of IOC Members and representatives from the Olympic Movement also tried out snow volleyball for the first time at the event.