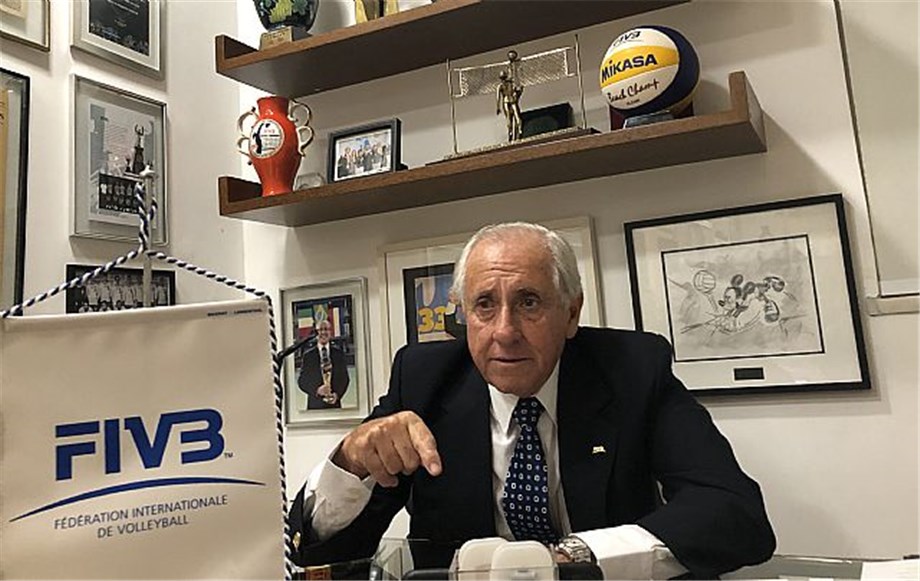 Lausanne, Switzerland, July 29, 2020 – FIVB President Dr Ary S. Graça F° joined the Chilean Volleyball Federation’s (FEVOCHI) Facebook live series from his home office in Rio, Brazil to speak about the global coronavirus pandemic, the level of volleyball in South America and the growth of volleyball in Chile.
Speaking with FEVOCHI President Jorge Pino Madrid, the FIVB President said:
"We have held various meetings since day one and consulted with each country about the situation. The truth is COVID-19 has had a significant impact. Some leagues did not want to stop, but in March  we decided to cancel all international events with immediate effect.
“It was only at the end of June that we informed countries they could resume national leagues if the necessary health measures are in place and the guidance of their respective national and health authorities allows it.
“As for international level events, our top priority will always be the health and wellbeing of the global Volleyball Family, and we will only restart events if this can be ensured.”
The FIVB President also discussed the rapid growth of volleyball and the need for the global Volleyball Family to work together to come through these challenging times united and stronger than ever before. He also highlighted the importance of the FIVB’s thorough financial administration in ensuring its continued growth.
In addition, FIVB President Dr Ary S. Graça F° discussed the level of volleyball in South America, stating:
“South American teams have to believe in themselves, because they are very strong. The prominence of Brazil and Argentina is well known, but Chile also travels a similar path, putting in a lot of work and effort.
“It is a continent with a lot of potential that has to keep holding various tournaments and forging idols, something that I consider very important, especially for children as they are the next generation for volleyball. I have great faith in South America.”
In regards to volleyball in Chile, the FIVB President expressed his admiration for recent events hosted in the country. He also expressed his strong belief that Chile is capable of organising large sporting events with the support of local and national authorities.
As for Chile’s volleyball potential and future outlook, the FIVB President said:
“Chile has once again become the competitive country that it was in my time as a player, demonstrating a fantastic evolution with dedicated management that is reflected in great results on the volleyball court.
“This is also demonstrated by the fact that the current President of the Pan American Sport Organization, Panam Sport, is a Chilean, Neven Ilic. He also previously led the Chilean Olympic Committee, facts that I do not think are a coincidence. I believe that Chile has to take advantage of this positive momentum in sports, and that in my opinion it is the era of Chilean volleyball.”