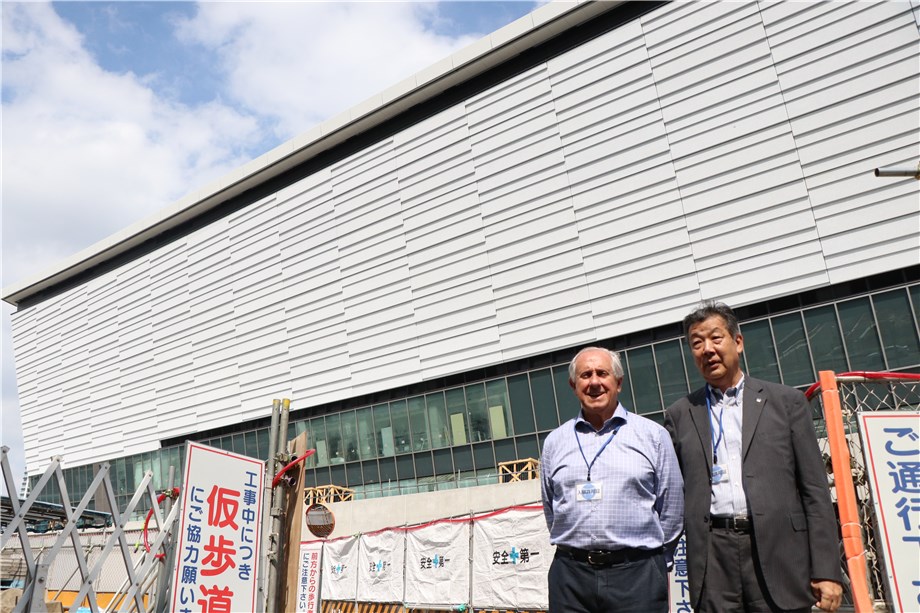 Tokyo, Japan, September 27, 2019 – FIVB President Dr. Ary S. Graça F° paid a visit to inspect progress on the stunning Ariake Arena yesterday, as part of his trip to Japan one year out from the Tokyo 2020 Olympic Games.
The impressive 15,000 seater arena, which will be completed in December 2019, will be the home of volleyball at next year’s Games. The venue, which will also host wheelchair basketball at the Paralympic Games, will become the heartbeat of a new sports and culture centre, and one of the biggest stadiums in Tokyo. This directly ensures that the arena will have a tremendous legacy, benefiting both local residents and visitors alike.
During his tour, President Ary Graça visited the field of play, spectator stands and the warm up areas. He described the modern venue as a “magnificent architectural gem, and the ideal place to showcase the best of our great sport.”
Volleyball was first included on the programme at the Tokyo 1964 Games, and the FIVB President is excited to celebrate the historic homecoming next summer.
“Japan has always held a special place in the hearts and minds of our fans and players,” he said. “I can’t wait for the doors of the Ariake Arena to open for our passionate Japanese and international fans, and of course for Olympic volleyball to return to its birthplace. The venue is more than 90% ready and will be the closest venue to the Athletes’ Village, only 5-10 minutes bus ride away. This, of course, will be of great benefit to our players.”
Both men’s and women’s teams from Japan are guaranteed a place as hosts. Brazil, United States, Italy, Poland, Russia and Argentina already qualified for the men’s tournament while Serbia, China, United States, Brazil, Russia and Italy have qualified for the women’s event via the Tokyo Volleyball Qualification Tournaments. The five remaining spots per gender will be decided in January