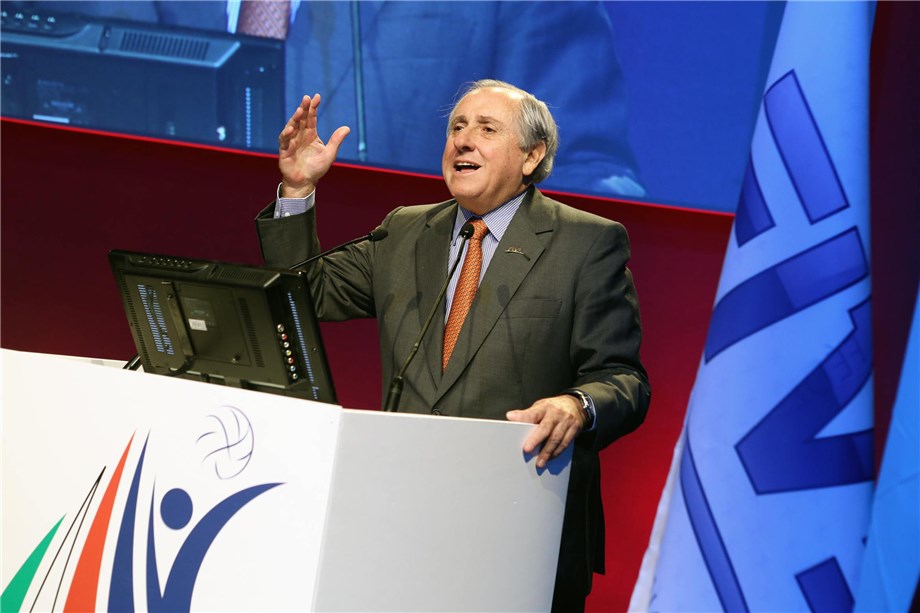 Reviewing achievements over the last two years, Dr. Graça spoke of measures put in place to enhance transparency and good governance, and of the positive impact of these measures on the federation's relationship with the International Olympic Committee. A new contract management process has also been put in place following a review of the structure of the head office by Deloitte, a leading consultancy company.

E-learning and project management tools have been set up to promote integration, helping coaches and referees to improve their skills and allowing national federations and promoters to access event regulations and key FIVB Master Plans. A partnership with JTA, a specialist sports PR company, is also helping to strengthen the institutional profile of the FIVB within the Olympic movement.

The FIVB's development programmes are an important part of providing new opportunities to volleyball's national federations and athletes. The FIVB is basing its action around Development Hubs, with specific countries helping their neighbours to progress. The FIVB is also pushing for volleyball to become a part of school curriculums around the world, a move which is at the heart of the African Dream Programme. "The support we are giving to Africa represents a major contribution to this continent, which has a real potential to grow into a true world volleyball power."

President Graça underlined the fact that since the 2012 Olympic Games in London, the number of nations competing to qualify for the next Games in Rio has risen by 51 nations to nearly 200. "The Continental Cup has been one of the most successful ways to broaden volleyball from which all of you are directly benefiting from." This growth is also reflected in the increase in the number of teams participating in the age-group World Championships. The FIVB World League and FIVB World Grand Prix have also grown from 18 to 28 participating teams this season.

Dr. Graça thanked FIVB sponsors Mikasa, Honda, Gerlor and Jinling for their support in helping to maintain volleyball's status as one of the leading Olympic sports. These sponsors have recently been joined by Rosetta Stone, a leading language-learning organisation, and DB Schenker, one of the world's leading international transportation and logistics companies. President Graça also welcomed Red Bull to the volleyball family, who will enter a strategic ten year partnership with the FIVB to take beach volleyball to a whole new level.

Turning to recent innovations, President Graça emphasised the importance of developing the use of digital platforms, including social media. "We must strive to be the most innovative and technologically advanced sport on the planet."

Innovations also include the volleyball tracking system, which will provide unprecedented levels of data on the game of volleyball, as it is played. This innovation will be accompanied by the use of revolutionary LED nets, which will help to develop marketing and communication around the sport.

President Graça also spoke of the importance of building on partnerships with television. "We have been revising our rules and match format to make our sport more television-friendly, and are investing in new challenge system technology like HawkEye, which helps to make the sport fairer and more spectacular."

A list of recent achievements necessarily features a special reference to the highly successful World Championships in Poland and Italy in 2014. The men's competition in Poland saw 70000 fans attend the opening match in Warsaw, with record numbers of spectators throughout the tournament. "Poland is truly Volleyland. We brought volleyball into a whole new era of sports entertainment and Poland will be the benchmark for all volleyball events in the future.” The event in Italy was also a great success. "In Italy, we saw our development programmes bearing fruit, with the likes of the Dominican Republic achieving their best ever result at a World Championship, providing a taste of what is now the new FIVB standard."

President Graça concluded his speech to the 34th FIVB World Congress by pointing to the fact that the FIVB has set the standard for the years to come. "We have created a good problem for the future. Future promoters will have to organise tournaments at least at this level." With events to look forward to including the Rio Olympic Games and the Beach Volleyball World Championships in the Netherlands, President Graça said the FIVB is looking forward to working closely with the sport's organisers and stakeholders to continue to raise the standard of volleyball events around the world: "This is truly a golden moment for our sport. We can only achieve this together. Thank you for your trust, thank you for your confidence. It's truly an honour to serve you and serve our great sport."