Hamamatsu, Japan, October 2, 2018 - There has been a familiar face on hand during Pool D play at the FIVB Volleyball Women's World Championship the past few days. One that is recognizable to Japan volleyball fans but in a new role.

Hamamatsu, Japan, October 2, 2018 - There has been a familiar face on hand during Pool D play at the FIVB Volleyball Women's World Championship the past few days. One that is recognizable to Japan volleyball fans but in a new role.

Quick links - Volleyball:
FIVB Volleyball Women's World Championship Japan 2018
News
Schedule
Competition
Teams
Results and ranking
Tickets
Volleyball TV
Former wing spiker and opposite Saori Sakoda, a two-time Olympian, is here commentating on the action for host broadcaster TBS.
"When I was a player, I never expected that I would become a commentator," Sakoda stated. "To be one is kind of a surprise for me. This is a great experience to see the match from another perspective." 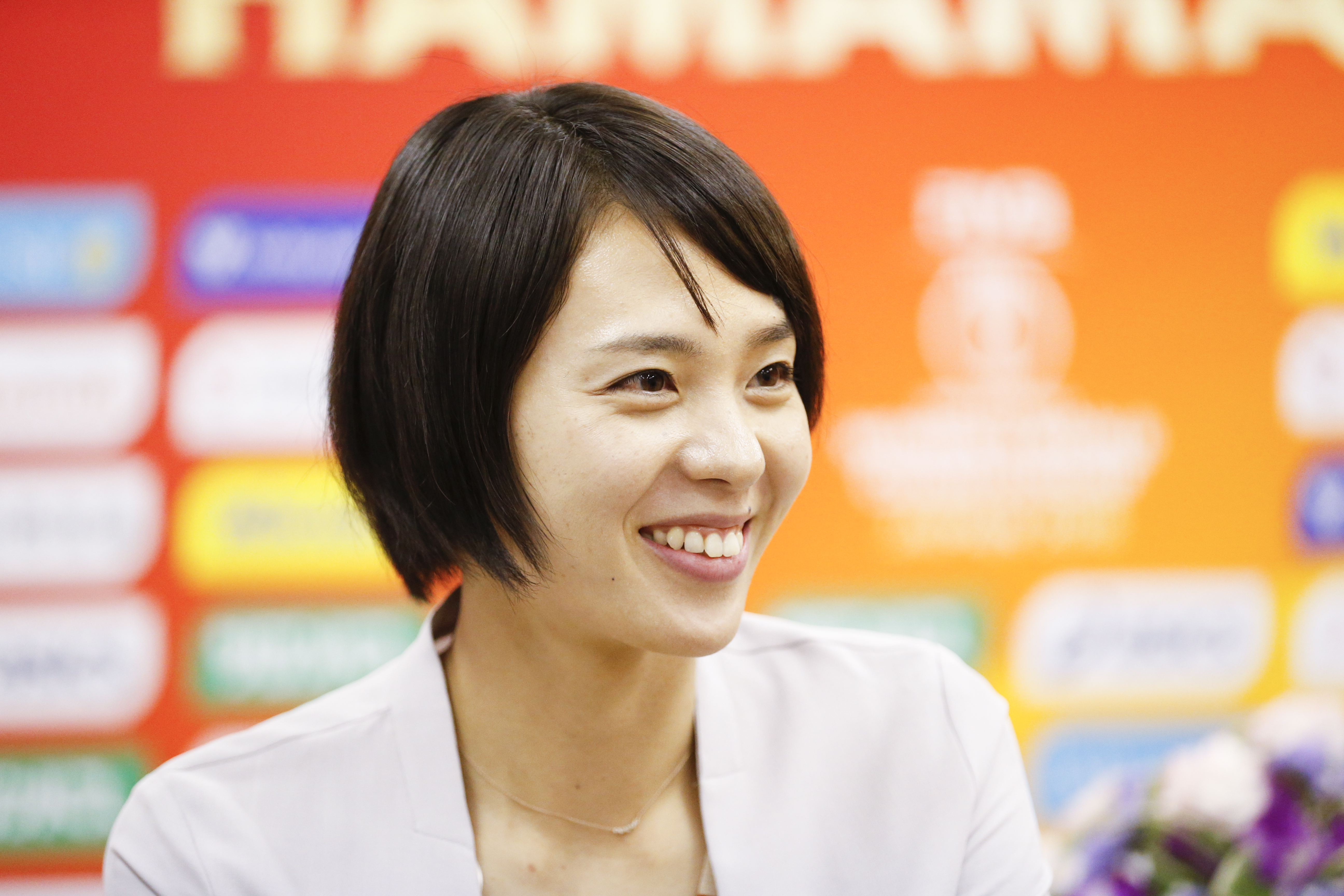 Former Japan international Saori Sakoda is commentating on the action at the Women's World Championship for host broadcaster TBS
The 30-year-old retired from the national team after the 2016 Rio Olympics and from her club team (Toray Arrows) following the 2016-17 campaign.
"Before the Rio Olympics started I was thinking that this might be the time for me to end my playing career," Sakoda recalled. "I wasn't tired, but I felt like it was a turning point. Since retiring I have not felt the urge to get back on the court."
Though the native of Kagoshima Prefecture in southern Japan often played in the shadow of more prominent teammate Saori Kimura, Sakoda's impact will never be forgotten.
Just like NBA legends like John Havlicek and Vinnie Johnson were famous for doing back in the day, Sakoda had the ability to come in off the bench and quickly change the course of a game almost as if a switch had been flipped.
She played a key role in two of the biggest moments in recent Japan volleyball history.
Sakoda starred in the bronze medal match against Korea at the 2012 London Olympics. She dominated the game against tournament MVP Kim Yeon Koung while playing alongside Kimura.
The 175-centimeter Sakoda, who possessed incredible jumping ability (305 cm), was the high scorer with 23 points and delivered the winning point in the emotional contest.
As joyous Japanese fans filed out of Earls Court after the 3-0 (25-22, 26-24, 25-21) victory, they were chanting, "Sa-ko-da, Sa-ko-da, Sa-ko-da." 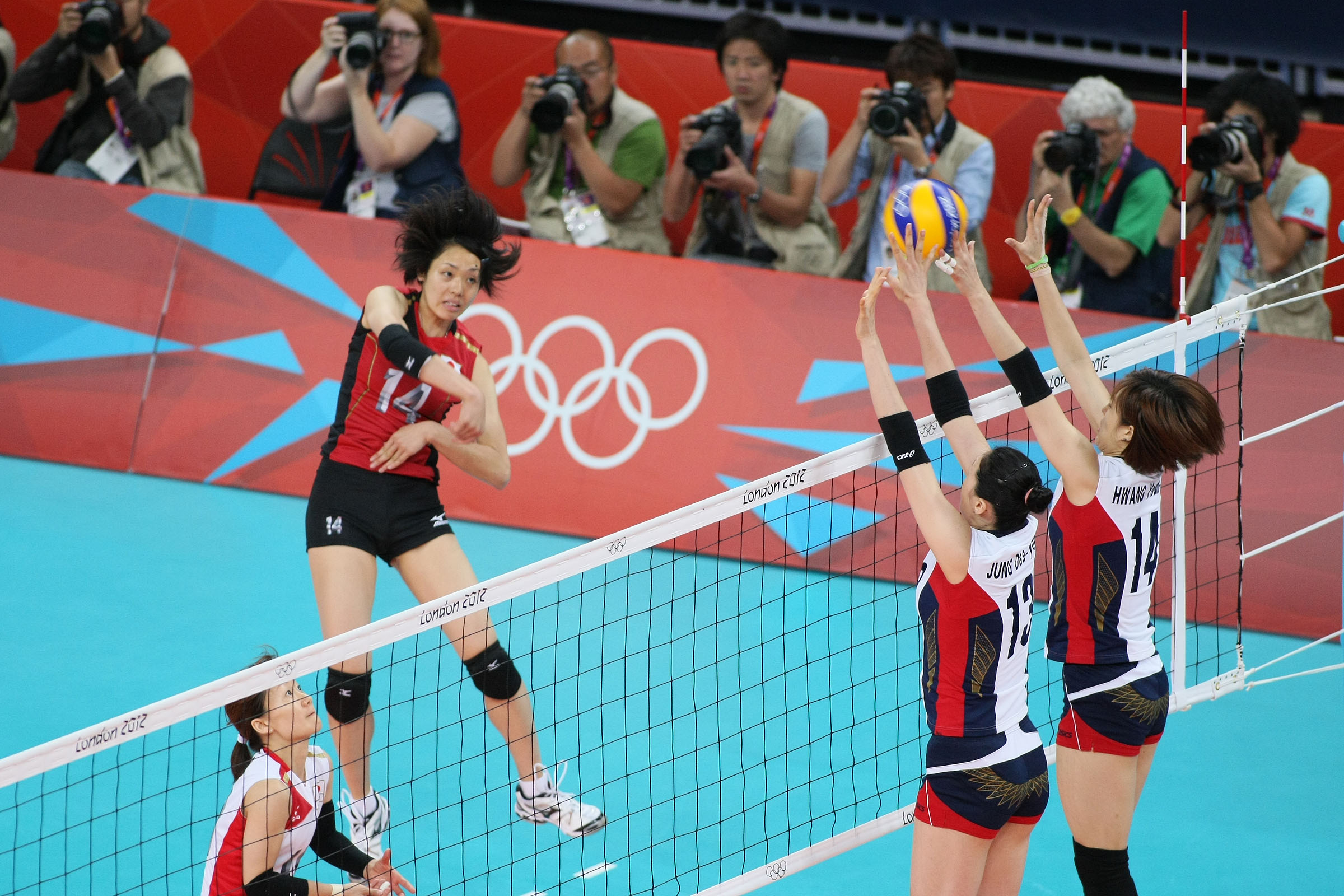 Saori Sakoda (left) of Japan spikes against Jung Dae-Young and Hwang Youn Joo (KOR) in the match for third place at the London 2012 Olympic Games
The medal was Japan's first in Olympic volleyball since the 1984 Los Angeles Games, and Sakoda spoke of its significance after the triumph.
"This win is very special to our team for many reasons but one of the big ones is because it has been almost 30 years since our last Olympic medal in women's volleyball. I'm part of the team and I had a lot of points today, but I wouldn't have been in a position to get them if it weren't for the play around me of my teammates.  I want to help them just like they want to help me and today we helped each other."
When asked more than six years later about that moment, Sakoda looked back with an interesting viewpoint.
"I feel like I was kind of a 'lucky girl' at the 2012 Olympics," she commented. "I didn't have a lot of opportunities to play in the tournament before the match against South Korea. When I went on the court I was able to score many points.
"In the bronze medal match at the London Olympics, with Kim Yeon Keoung and my teammate Saori Kimura playing, I felt like I was the sum of them. They were both star players, but I didn't think I was like that. I was just happy that many people were impressed by my play.
Many players did not make that Olympic team. My motivation was to win for the players who could not be a part of the team."
Sakoda says the glory of that match was not her career highlight, but just part of her job as a true team player.
"That wasn't the greatest moment of my career. I don't have any special moment that I really liked," she said. "I enjoyed the feeling and atmosphere off all the players uniting for a common goal. The belief that all the spectators and the Japanese team are together."
Four years later, Sakoda reprised her starring role in an incredible comeback victory over Thailand in the 2016 Olympic qualifying tournament in Tokyo.
With Japan's bid for a trip to Rio in serious doubt after falling behind 9-3 and 12-6 in the fifth set, Sakoda took over and helped deliver a win for Japan, scoring the final point in the pulsating affair. She had a match-high 24 points in that win. 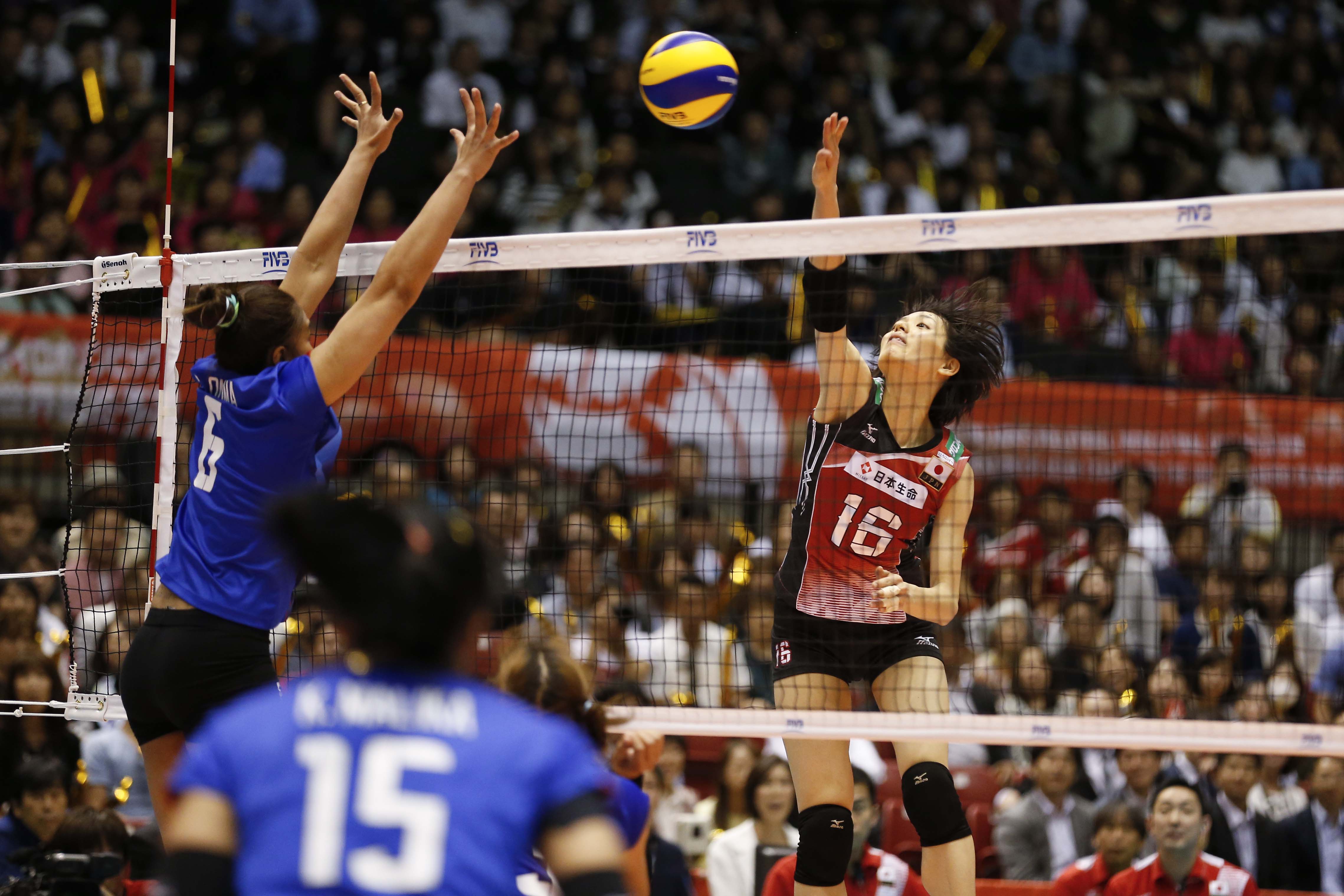 Saori Sakoda spikes against Thailand at the World Olympic Qualification Tournament in Tokyo in 2016
"It was the same situation before the Thailand match. I had not played much but I got the chance. I felt like it was a unique opportunity for me to contribute to the team's victory. This is why I could play well. The situation created energy for me."
Though clearly blessed with great natural talent, Sakoda credited others who helped her along the way for her successful career.
"Many people helped me to improve my playing skills. That is why I could play well," she noted. "I don't think I had great natural skill, but volleyball is a team sport and the other players helped me play well during my career with the national team and club teams."
Though Sakoda is doing TV work at the World Championship, she says the next chapter of her life story is yet to be determined.
"I'm not sure about my future and whether it will involve volleyball or not. I'm still searching for my next career," she stated.
Sakoda encouraged children interested in volleyball to have passion for playing the sport.
"It doesn't matter if kids are tall or not, or skillful or not, the most important factor is to enjoy volleyball from the bottom of your heart. My message to children is, 'just enjoying playing volleyball.'"