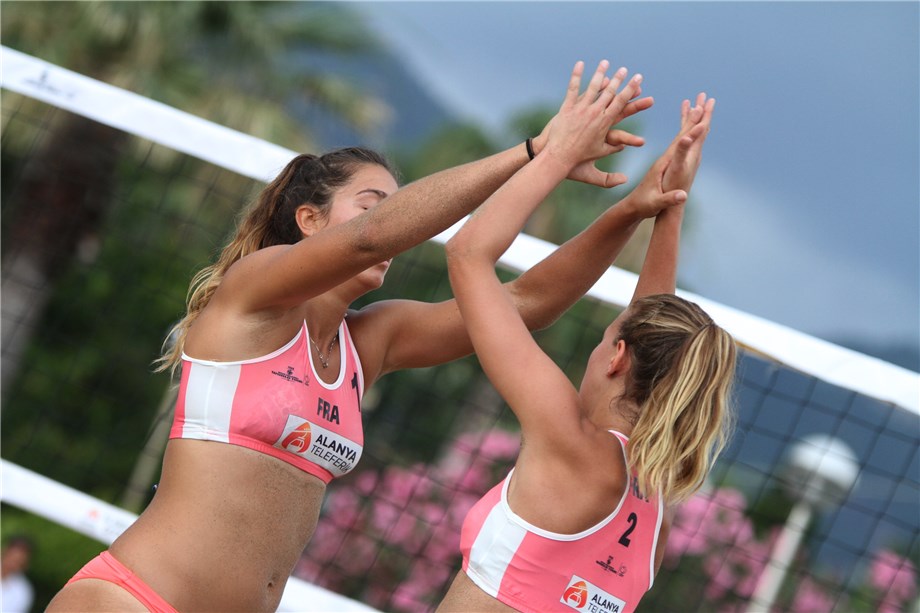 Alanya, Turkey, June 1, 2018 – The second day of the Alanya one-star event on the FIVB Beach Volleyball World Tour featured matches from the main draw of the men’s and the women’s competition as the teams had to cope with rain and less favourable conditions than for Thursday’s qualification round. 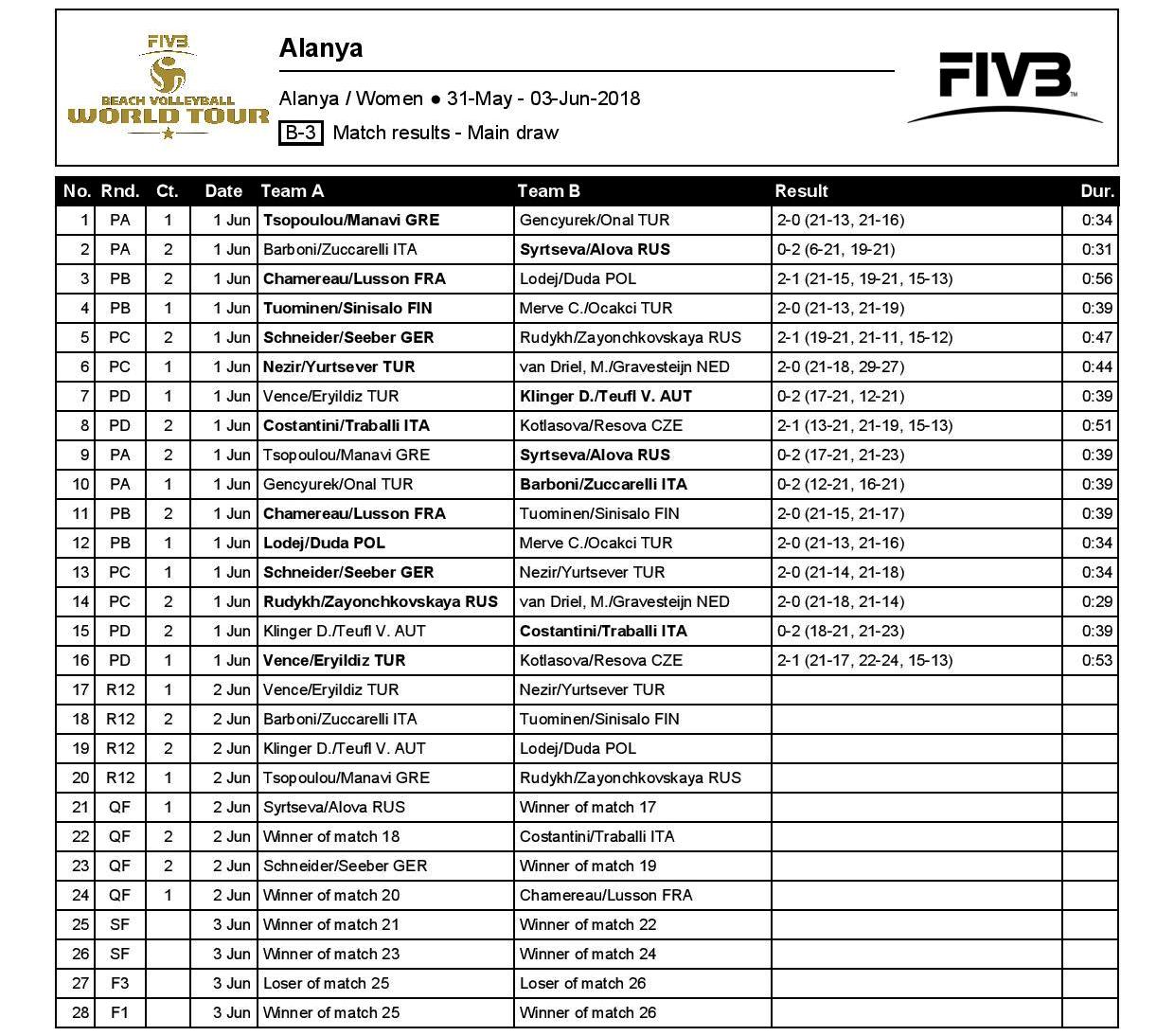 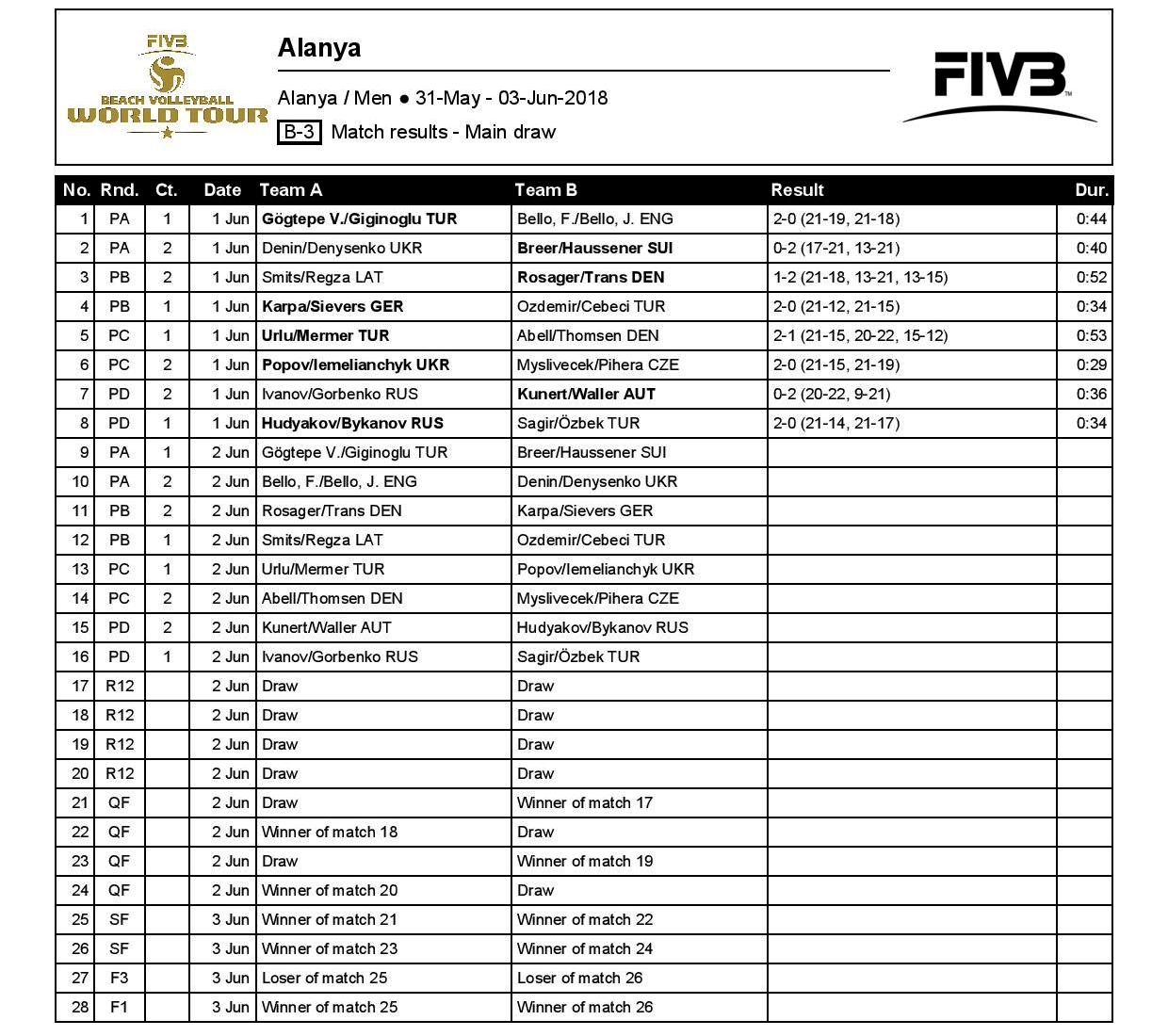 Quick links - Beach volleyball:
FIVB Beach Volleyball World Tour - Alanya
FIVB.com - Beach volleyball
Latest Videos
Facebook
Twitter
Instagram
On the women’s side, the entire pool stage took place on Friday with four teams emerging as pool winners with direct tickets to the quarterfinals - Russia's Ekaterina Syrtseva and Anna Alova, France's Aline Chamereau and Ophelie Lusson, Germany's Sarah Schneider and Viktoria Seeber and Italy's Silvia Costantini and Gaia Traballi.
The women’s main draw started with top-seeded Greeks Konstantina Tsopoulou and Dimitra Manavi storming to a 2-0 (21-13, 21-16) victory over Turkey’s Neriman Gencyurek and Guldeniz Onal. Syrtseva and Alova recorded a similarly compelling 2-0 (21-6, 21-19) victory in their match against Agata Zuccarelli and Arianna Barboni of Italy, before upsetting the Greeks by 2-0 (21-17, 23-21) for the top spot in Pool A.
Turkey’s Muge Ocakci and Merve Celebi lost their two matches in Pool B to Finland’s Nette Tuominen and Ida Sinisalo and Poland’s Marta Lodej and Marta Duda in straight sets. Germany’s Schneider and Seeber did not leave too many chances to another Turkish team, as they beat Merve Nezir and Selin Yurtsever 2-0 (21-14, 21-18).
One of the highlights of the day came when home stars Aleyna Vence and Bugra Eryildiz played Czech Republic’s Tereza Kotlasova and Daniela Resova. The silver medal winners from the Snow Volleyball European Championship had the crowd behind them all the way from start to end as they were trying to secure Turkey’s second win in the tournament. They won the first set 21-17 before losing the second one 22-24. The tie-break was some kind of an early final – such was the ambiance. It was a very close fight under the rain before the hosts and their fans eventually celebrated a 15-13 win.
After making it through the men’s qualifications on Thursday, English youngsters Luis Bello and Joaquin Bello returned to the court, losing their first match in Pool A to Turkey’s Murat Giginoglu and Volkan Gogtepe. Germany’s Max-Jonas Karpa and Milan Sievers claimed easily their first match in Pool B where they beat Turkey’s Yusuf Ozdemir and Ali Cebeci 2-0 (21-12, 21-15).
Turkey’s Safa Urlu and Hasan Huseyin Mermer secured the host country’s second victory in the tournament with a 2-1 (21-15, 20-22, 15-12) win in their Pool C match against Denmark’s Kristoffer Abell and Daniel Thomsen.
“It is an important victory for us and for our country. We did not want to have to go through the losers’ bracket and as a result, we fought even harder,” Urlu said. “We feel proud to celebrate this victory for Turkey. Our aim is to finish the tournament among the top three and I believe we can do that,” his partner Mermer added.
In Pool D, Thomas Kunert and Philipp Waller of Austria beat Russia’s Vasilii Ivanov and Sergey Gorbenko 2-0 (22-20, 21-9).
The matches for the first places and those for the third places in the men’s pools’ standings will take place on Saturday. 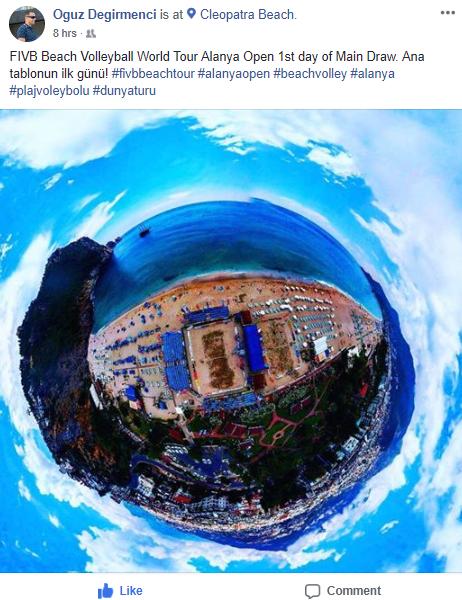