De la Cruz was looking forward to returning home after the league’s playoffs were suspended indefinitely due to the coronavirus pandemic. With airports in her country restricting incoming flights, however, the authorities of the Dominican Republic and Russian Volleyball Federations took advantage of one empty flight to embark the highly touted athlete at Sheremetyevo Airport in the Russian capital.
The 12 hours of the flight to pick up hundreds of Russians stranded in the Caribbean country felt like an eternity to the player who will turn 33 in May and who has played in leagues as far from home as Japan, Korea and Indonesia. 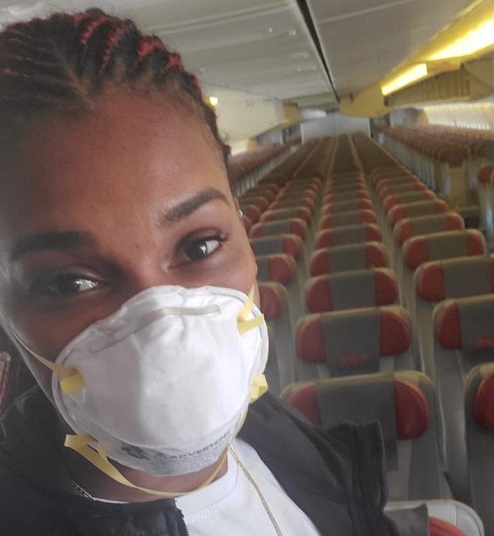 “As a frequent traveller I have gone through many experiences but I have never flown before as a lone passenger,” said De la Cruz in a telephone conversation from the quarantine centre. “I am in good health and spirits - not even the normal jet-lag you go through after long flights is a worry. But you have to go by the rules, especially under the current circumstances.”

De le Cruz commented on the close to royal treatment she received from the flight attendants and airline crew during the trip.
“You can imagine, they were asking questions on what and when I wanted to eat or drink to make the journey as comfortable as possible,” she said. “I killed the time moving around, watching movies and looking at photos, reading and of course sleeping. It was a first in a lifetime for me.”

Her next step is to reunite with her closest family made up of her husband Fermín Mejía and her 10-year-old son Fern.

“It’s a very long non-stop flight of 9,235 kilometres on a 335-seat aircraft and you feel some anxiety, but finally I am on home soil.”

“It was very sad not to finish the season in Russia, especially because our Dynamo Kazan team were so close to advancing to the final series, but you can’t put players, fans and officials at risk,” De la Cruz added. “It was a prudent move to cancel all the sports events and now my top priority is to be with my family as soon as possible.”
Speaking of the postponement of the Olympics, Bethania said: “It’s a big blow for all the qualified teams and it changes my personal plans, but it is what it is. Now it’s time to take a rest and stay in our homes following the advice of the authorities.”