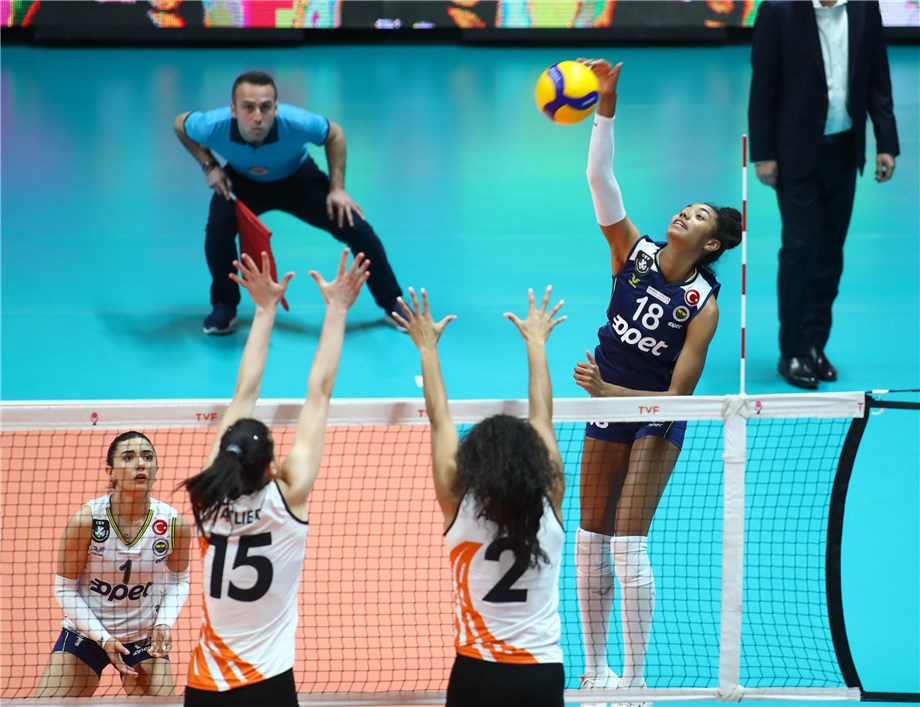 USA's Jordan Thompson strikes for Fenerbahce Istanbul against the Karayollari block Merve Atlier and fellow-American Symone Abbott in the last round of the Turkish League Regular Season.

Istanbul, Turkey, March 20, 2020 - The women's Turkish League has been the latest of the domestic competitions to be cancelled, following a decision on Thursday by the country's authorities to suspend all sporting events due to the coronavirus pandemic, stopping the action at the end of the Regular Season, with three-time world champions VakifBank Istanbul standing at the top of the table.

VakifBank wrapped up the Regular Season with just one defeat in 22 games - a straight-set affair in the hands of Fenerbahce Opet Istanbul in Round 5 of the competition, last year. VakifBank's closest rival in the standings, trailing by six points and on a 20-2 record, was their fiercest crosstown archrivals Eczacibasi VitrA.

Both Eczacibasi's defeats were to VakifBank in straight sets.

At the time of suspension, Serbia's Tijana Boskovic leads the scorers tables both in absolute numbers (402) and in points per set (6.09). The 23-year-old opposite has played in 66 sets for Ecazcibasi's total 78.

In absolute scoring numbers Belgium's Helene Rousseaux is second only to Boskovic, having brought in 377 points for of Nilufer Belediyespor, while Meryem Boz is third with 348 for Aydin Buyuksehir Belediyespor.

But calculating by points scored per set, it is Sweden's Isabelle Haak who trails Boskovic, on 5.55 per set for VakifBank in the 60 sets she played of her team's 72. Boz is third in that list with an average of 4.9 in 71 (out of Aydin's 76) sets.

Cuba's Melissa Vargas has been serving an average of .85 aces per set for Fenerbahce totalling 39 in the Regular Season, though Boskovic and VakifBank's Ebrar Karakurt have each delivered 40 aces in absolute numbers.

And in blocking, VakifBank's Zehra Gunes has been stuffing her opponents on average .95 per set played, with Ukraine's Yulia Gerasymova leading in absolute numbers on 65 blocks for Karayollari.

With the official position being that the league is postponed, there is no discussion yet on the appointment of a champion nor of determining which teams will represent Turkey in potential 2020-21 European competitions.