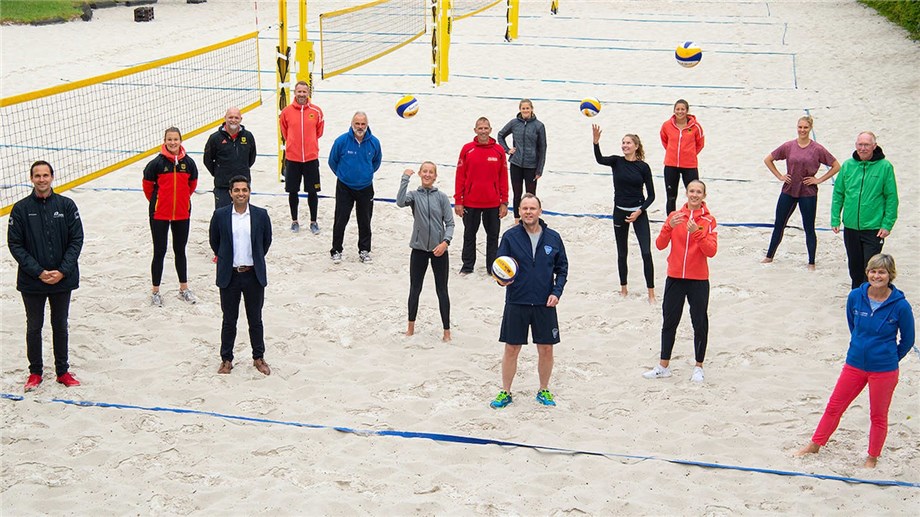 Lausanne, Switzerland, June 12, 2020 – The German Volleyball Federation (DVV) today concludes its training course at its primary beach volleyball coaching facility in Hamburg, Germany to develop beach volleyball talent.
Aimed at current national players and future German beach volleyball stars, the course sought to recognise and encourage new talent to continue the development of beach volleyball in Germany in preparation for the upcoming Paris 2024 Olympic cycle. Taking place in Hamburg, the heart and soul of German beach volleyball and the city that hosted the spectacular FIVB Beach Volleyball World Championships 2019, the course also focused on sports science, scouting and the mental aspect of elite competition through sessions with sports psychologist Anett Szigeti.
The DVV ensured the necessary measures were in place to protect the health and wellbeing of everyone involved. For example, training took place in five groups under five different trainers, which included the likes of Jürgen Wagner, the coach of several Olympic champion teams, head coach of the women’s national team, Imornefe Bowes, and another coach from the women’s team, Helke Claasen. In addition, coaches from the youth national team, Jörg Ahmann and Kay Matysik, were also present to help develop that winning formula.
“After the Olympic Games in Tokyo, we will change generations and take the first step with this course. We want to give the athletes the chance to present themselves, everyone has worked on it in recent years,” said Beach Volleyball Sport Director Niclas Hildebrand before adding, “we will analyse the results after the last day of the course on Friday and talk to all athletes over the next few weeks in person with whom we want to go to the next Olympic cycle for Paris 2024.”
Additionally, Hamburg’s sports senator and huge beach volleyball fan, Andy Grote, attended the training course, one of the first official sporting events since his appointment to the city’s senate on Wednesday. Clearly impressed by the array of talented and dedicated athletes, Grote said:
“The future of German beach volleyball will be made in Hamburg. The training course is now about determining our potential national teams with a view to the Olympics 2024 and 2028, who will train at the federal base in Hamburg. For this I wish the athletes all the best, lots of power and success!”