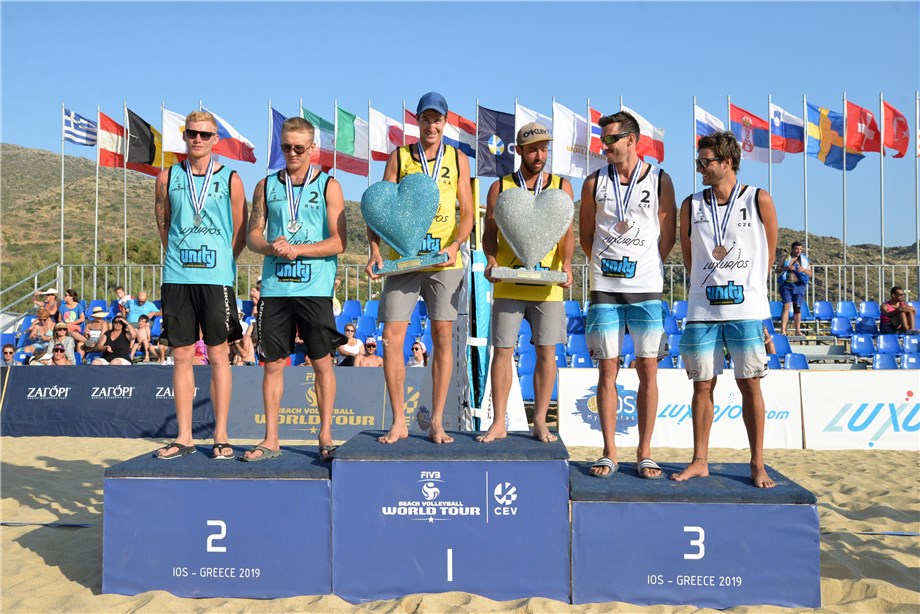 Ios, Greece, June 16, 2019 - France's Florian Gosselin / Jeremy Silvestre took Ios by storm, sailing through the qualifiers, brushing off all opposition in the Main Draw and then, Sunday afternoon, toppling top seeds Maxim Sivolap / Artem Yarzutkin of Russia 2-1 (21-16, 15-21, 15-12) in the final to claim the men's gold medal at the 2019 FIVB Beach Volleyball World Tour 1-star event on this cycladic island.

The French pair, who played together for the first time on Ios' spectacular Mylopotas Beach, won their two qualifcation matches and both their pool play games, before beating the Czech Republic's Filip Habr / David Lenc 2-1 (21-19, 16-21, 15-10) in the semifinals earlier on Sunday.

For Silvestre, however, this is his second gold medal in a World Tour, after winning the Siofok 1-star tournament last year with previous partner Romain Di Giantommaso.

"It is fantastic to have won the gold, considering we are playing together for just three weeks and before this tournament we had not had a single game as a team," said Gosselin.

"The level of the competition was higher than I expected and even in the qualifiers we faced some challenges," added his team mate Silvestre. "The wind created a few problems for me, but I had great support from my team mate and together we adapted our tactics to achieve this success."