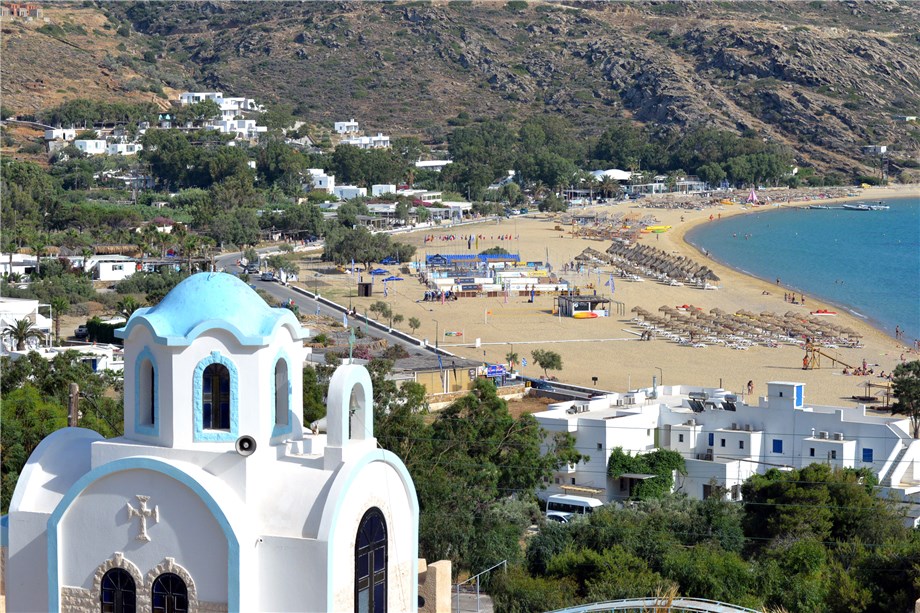 Overview of Mylopotas Beach on the island of Ios with courts set up and ready for the FIVB Beach Volleyball World Tour 1* by LuxurIos, starting Friday.

Ios, Greece, June 13, 2019 - After a 13-year hiatus Greece returns tomorrow to the world beach volleyball scene as the qualifiers of the FIVB Beach Volleyball World Tour 1* by Luxurios get underway at the idyllic Mylopotas Beach on the Cycladic island of Ios.

Greece had last hosted a world event in 2006, when USA's Misty May-Treanor and Kerry Walsh picked up the gold medal of a women's only World Tour stop at the Olympic Beach Volleyball Centre in Athens.

Thirteen years on at Ios, Marcel Myslivecek / Martin Pihera of the Czech Republic head the 16-team field of the men's Qualification Tournament, alongside France's Florian Gosselin / Jeremy Silvestre.
The Czech pair are competing in their third World Tour event of the season, after finishing 25th in the Ostrava four-star event and 21st at the Baden one-star.
As a team their best performance has been a silver medal at the Samsun one-star World Tour tournament last year.
Top of the women's qualifiers are Turkey's Merve Nezir / Bahanur Gokalp, with Beata Vaida / Ioana-Alexandra Ordean of Romania at No. 2.
The Turkish team are playing in only their third tournament together. They were 13th at the Aydin two-star tournament at home and 5th at the Baden one-star, both this year.
The qualifiers in Ios begin Friday morning with four spots per gender in the Main Draws up for grabs. The 16-team Main Draws follow on Saturday and Sunday.

A total of 12 countries are represented in the men's qualifiers and 10 in the women's event.