Grimalts making the most of their Euro trip

Montpellier, France, August 28, 2020 – Marco and Esteban Grimalt had anticipated they would spend a fair portion of their time in 2020 competing in FIVB Beach Volleyball World Tour events across Europe, but the coronavirus pandemic that put the world on a halt in March changed their plans.

Montpellier, France, August 28, 2020 – Marco and Esteban Grimalt had anticipated they would spend a fair portion of their time in 2020 competing in FIVB Beach Volleyball World Tour events across Europe, but the coronavirus pandemic that put the world on a halt in March changed their plans.
It took the Chilean cousins more time than they first imagined, but they still found their way to the Old Continent in time to compete at this week’s 1-star tournament in Montpellier, France. The French coastal city, however, is just one of several stops of their European trip and they want to make the most of each one of them.
“We decided to come to Europe now because the pandemic is better controlled here than in Chile and that allows us to have better conditions for training and even to play in some events with international teams,” the 29-year-old Esteban explained. “We used the time without tournaments to work on our fitness and we are in the best form we’ve been in for a long time, but we lost our match rhythm after such a long break and now we’re slowly regaining it.” 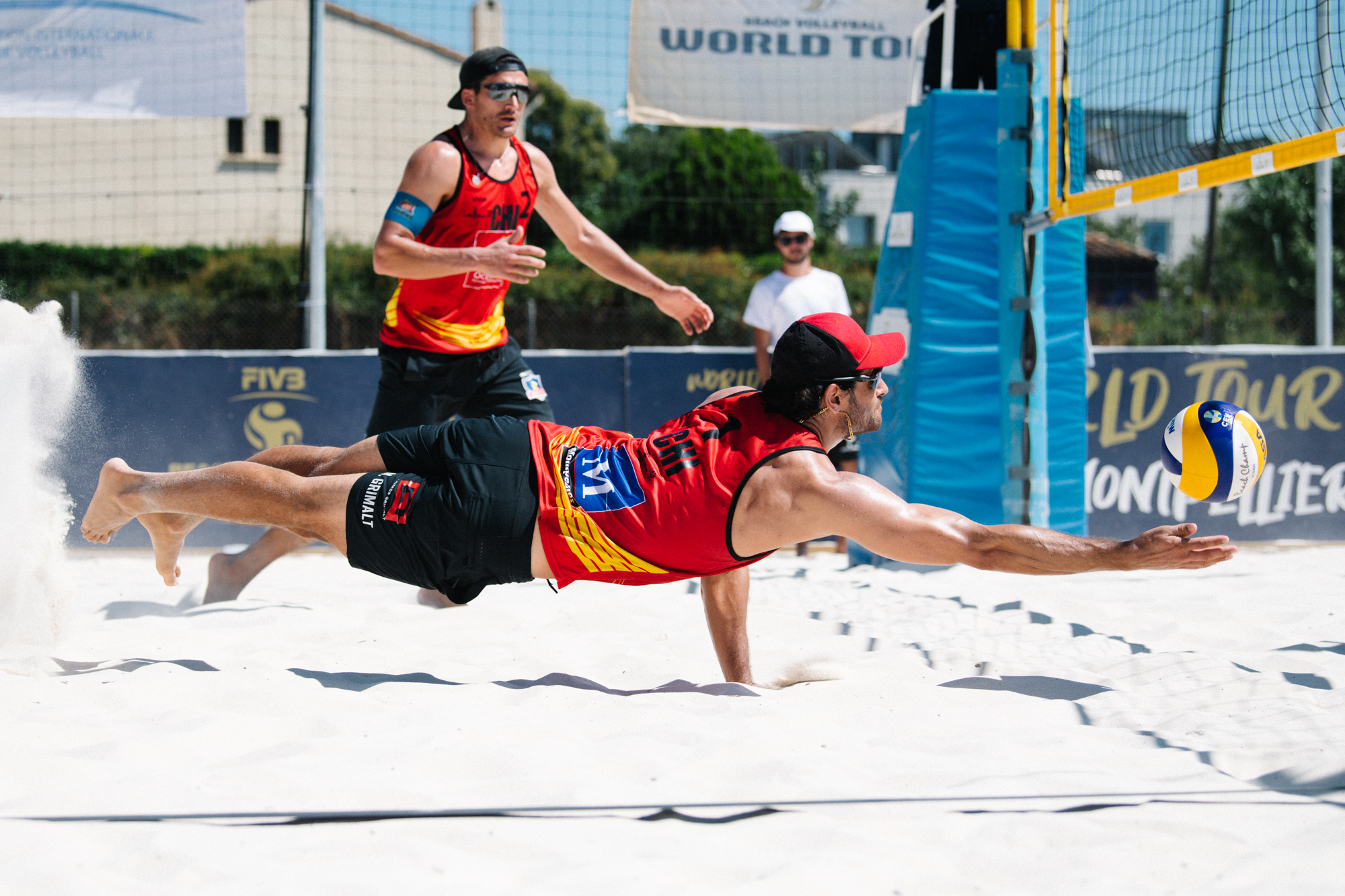 The Grimalts are playing this week in Montpellier, France, as part of their European trip
Prior to arriving in France, where they’ll also spend next week training in Toulouse, the Chilean cousins spent the last week, their first in Europe, in Lorca, Spain, where they got to work with the country’s top teams, including their good friends, World Tour veterans Pablo Herrera and Adrian Gavira.
“The week we spent in Spain was great,” Marco, 31, commented. “Pablo and Adrian are a great team and the level of the training sessions we had together was very high. I’d say that this one week is Spain has helped us more than a month in Chile would with the limitations we currently have there. It prepared us really well to compete in France and we couldn’t wait to get back into tournaments.”
From Toulouse, the cousins will head to what might end up being the highlight of their international season this year, the King of the Court tournament in Utrecht, the Netherlands. It will be their only opportunity to battle some of the best teams in the world – even if in a different system – since their ninth-place finish at the World Tour four-star tournament in Doha, Qatar, back in March.
“This is an event we’re really looking forward to,” Esteban added. “The best teams in the world will be there and it will be a great spectacle. We are working to get there in good shape so we can perform well and get a good result.” 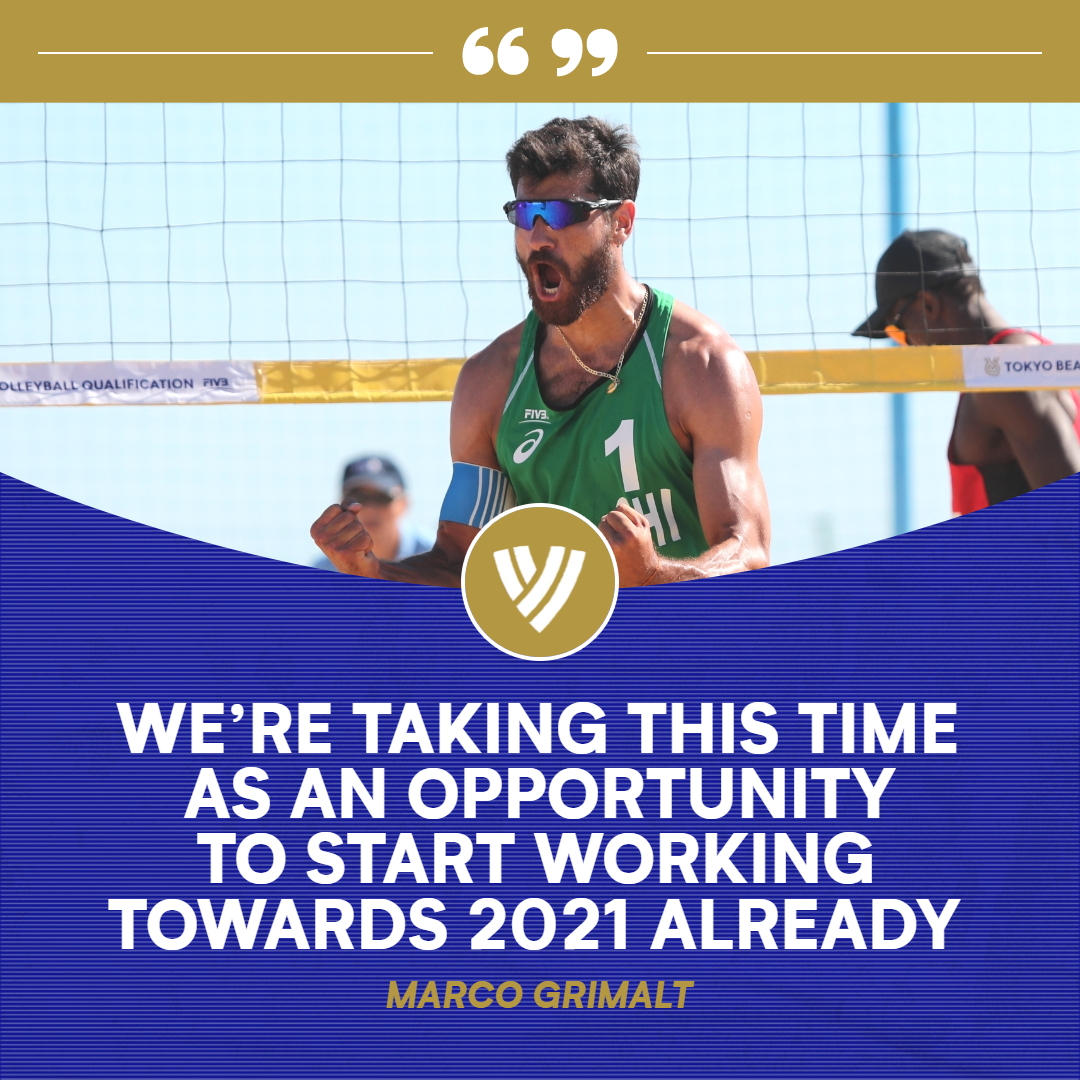 After the event on Dutch soil, the cousins, who are accompanied by head coaches Paulao Moreira and Fernando Ramos and Chilean female players Francisca Rivas, Chris Vorpahl, Pilar Mardones and Paula Vallejos, will head to Rome, Italy, for another week of training. From there, they’ll make their final stop in Tel Aviv, Israel, for a training camp, before returning home to Santiago.
The six weeks in Europe might not be as intense as the Grimalts are used to with back-to-back World Tour events and frequent competition against the best teams in the world, but they want them to serve as a foundation rock for their final sprint towards a second-consecutive Olympic participation at the Tokyo 2020 Games. 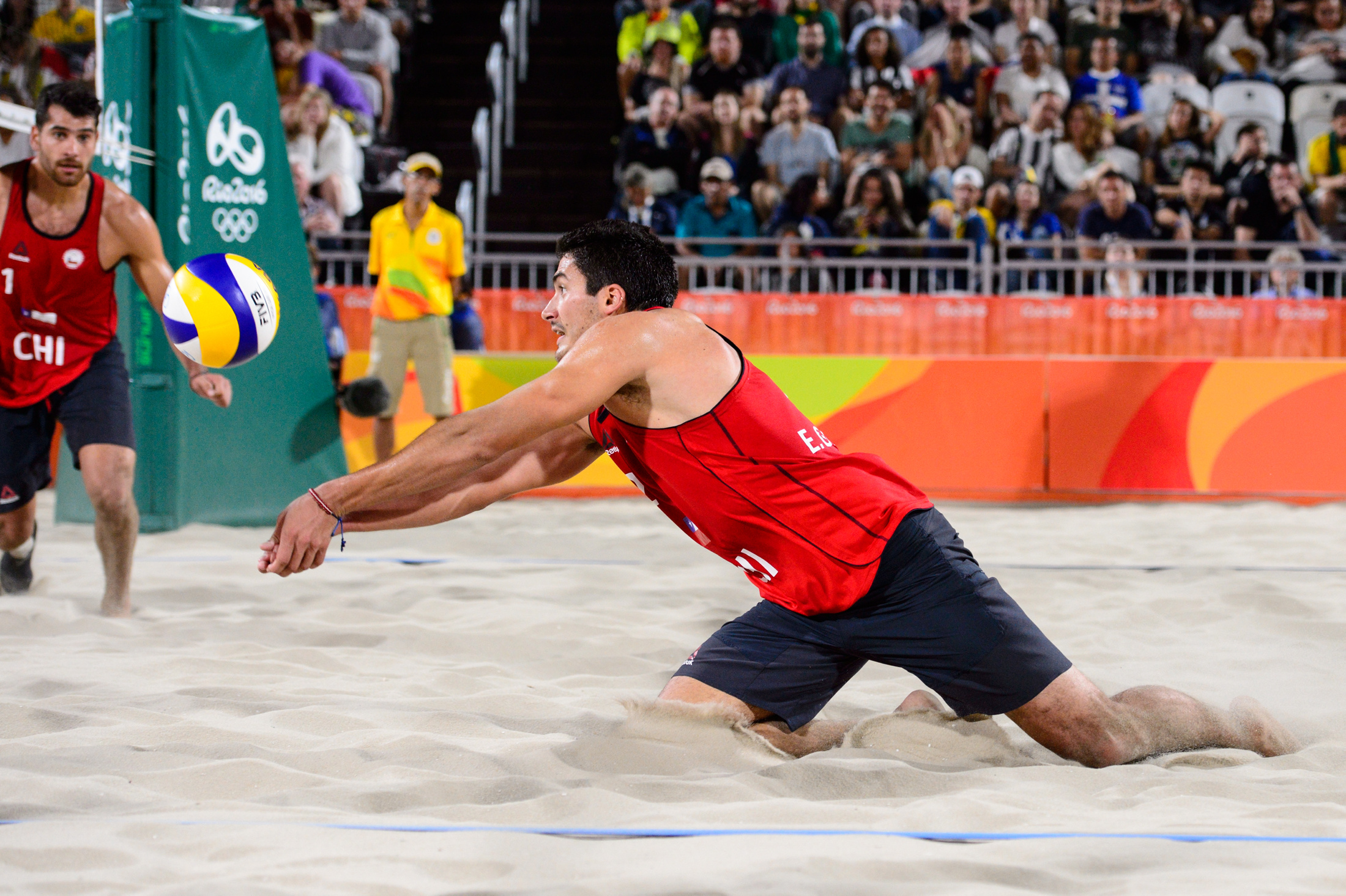 Esteban digs during the Grimalts' first Olympic appearance in Rio
The Chileans are currently 16th in the provisional Olympic ranking and they want to be as ready as possible when the sport returns to its typical pace so they can represent their country at the Olympics again after finishing 19th in Rio four years ago.
“We understand there won’t be a lot of tournaments between now and the end of the year, so we’re taking this time as an opportunity for us to start working towards 2021 already,” Marco concluded. “We’re in a good place in the Olympic rankings and the possibility of qualifying for the Games for a second time really motivates us. Hopefully this trip will work as a foundation for us next year.”
More beach volleyball from Chile:
Marco and Esteban Grimalt on their plans
Team of the Week: Marco and Esteban Grimalt
Esteban Grimalt's unique journey
Quick links:
FIVB Beach Volleyball World Tour - Montpellier 1-star
FIVB Beach Volleyball World Tour
Olympic Games Tokyo 2020
Facebook
Twitter
Instagram
Youtube
This website uses cookies to ensure you get the best experience on our website. For more information please read our Cookies Policy.
Ok