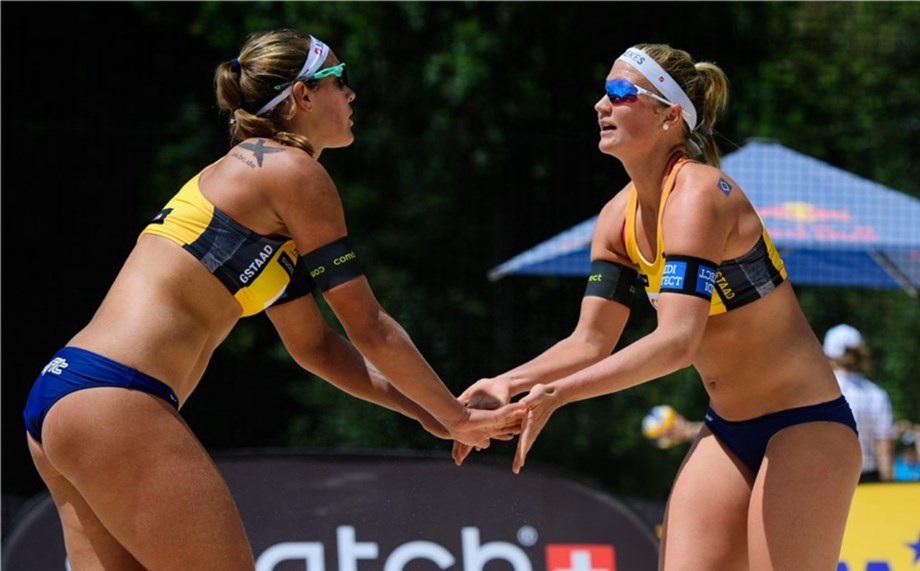 Victoria Bienek (left) and Isabel Schneider have played together since 2017

Lausanne, Switzerland, February 6, 2019 – The German Volleyball Federation (DVV) has begun its preparations for an important two years of beach volleyball.
They have confirmed the four women’s and three men’s teams that will receive funding and coaching support as they chase the medals at the Hamburg 2019 FIVB Beach Volleyball World Championships, the Tokyo 2020 Olympic Games and the FIVB Beach Volleyball World Tour.
All seven teams will be eligible for the World Championships, but like all National Olympic Committees Germany will be limited to a maximum of two teams per gender at Tokyo 2020.
With Hamburg hosting the biennial World Championships from June 28-July 7 there will be expectations that a home team finishes on the podium just as bronze medallists Julius Brink and Kjell Schneider did when Germany last hosted a World Championships in Berlin in 2005.
Come Tokyo 2020 Germany will be aiming to win an Olympic gold for the third consecutive Games following Brink and Jonas Reckermann’s win at London 2012 and Laura Ludwig and Kira Walkenhorst’s gold medal performance at Rio de Janeiro 2016.
The women’s teams have had a complete change following Walkenhorst’s retirement at the start of the year. Ludwig will now play with former Germany volleyball team captain Margareta Kozuch, while Kozuch’s former partner Karla Borger has teamed up with Julia Sude.
That left Chantal Laboureur looking for a partner and in recent weeks she announced that she will form a duo with Sandra Ittlinger.
Victoria Bieneck and Isabel Schneider will continue a partnership that made its bow when they won gold at the inaugural FIVB U23 Beach Volleyball World Championships in 2013, and which has featured on the World Tour since 2017.
“There have certainly been a few eventful weeks behind us on the sand,” DVV sports director Niclas Hildebrand said. “This process is now complete, which is why I look positively to the future.
“We are absolutely convinced of the great quality of our women's teams and have therefore also expressed confidence in all new teams. I am sure that we will see an exciting fight with the women for the maximum of two available Olympic tickets.”
By contrast the men’s teams are relatively settled.
Lars Fluggen will continue alongside Nils Ehlers, a partnership which featured for the first time at the 2018 Moscow 4-Star, and Julius Thole and Clemens Wickler will aim to build on the progress they showed when they won their first World Tour medals, silver at the 2019 Hague 4-Star and bronze at the 2018 Espinho 4-Star.
Philip-Arne Bergmann and Yannick Harms complete the trio of teams, while Lukas Pfretzschner and Robin Sowa are a development team.
“In the men's field, the change for the future is certainly not yet complete,” Hildebrand said. “Nevertheless, we are very well positioned in the fight for a place at the Olympics. We want to establish ourselves with two men’s teams qualifying for Tokyo 2020.”