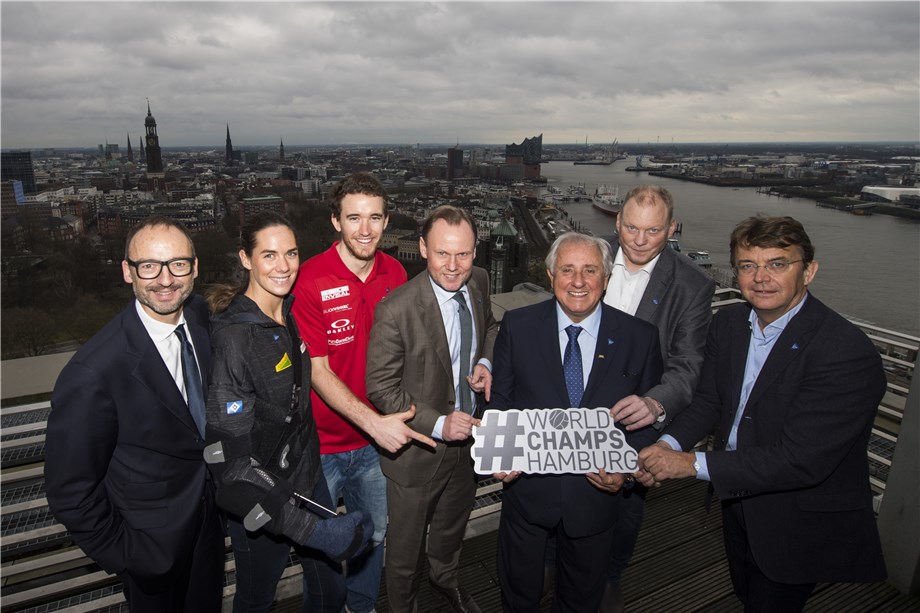 Lausanne, Switzerland, January 24, 2018 – The FIVB announced today that Hamburg, Germany has been selected as the host of the 2019 FIVB Beach Volleyball World Championships, as the federation continues to secure world-class cities to host its flagship events. The tournament will be staged at the Am Rothenbaum Stadium.

Hamburg, home of the FIVB World Tour Finals for two consecutive seasons, has proved itself to be a great venue for beach volleyball, with a passionate fan base and a vibrant atmosphere. Germany is also one of the countries of the FIVB’s Nucleus Project – the new strategy for raising the professional standard of volleyball by focusing development on key individual markets.

The announcement was made during an official press conference in Hamburg. FIVB President Ary Graça was joined by the Senator for Sport in Hamburg, Andy Grote, as well as President of the German Volleyball Federation Thomas Krohne, CEO of the Beach Majors Company Hannes Jagerhofer and Olympic and World Champion from Germany, Kira Walkenhorst for the announcement ceremony. 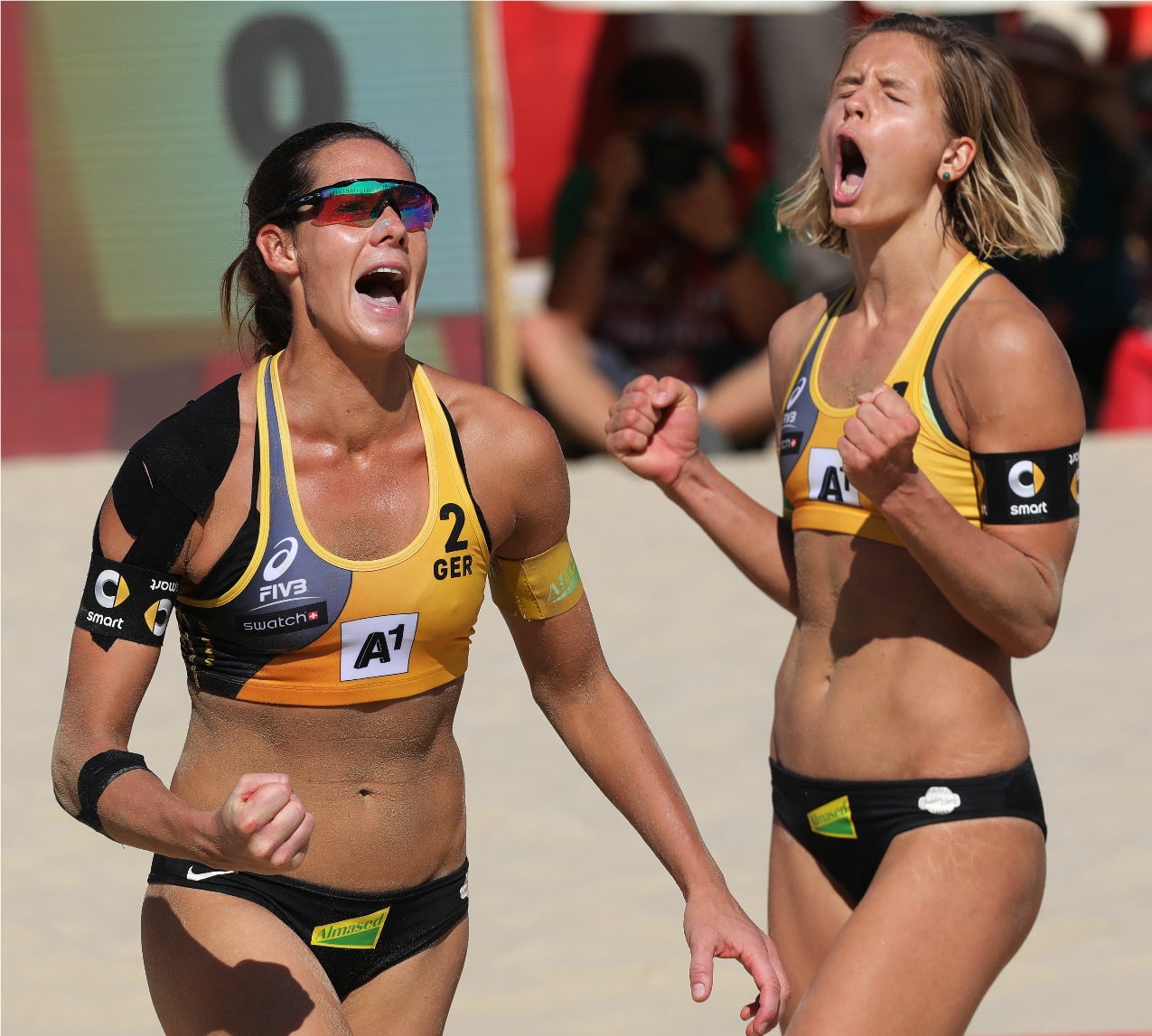 “Germany is a key market for the FIVB and we are delighted that Hamburg is committed to delivering major FIVB beach volleyball events and showcasing the great appeal and popularity of our sport.

“I have no doubt that the city will be an excellent host for the 2019 Beach Volleyball World Championships, and will build up on the success of the 2017 edition staged in Vienna. This event always demonstrates the FIVB’s core principles of skill, athleticism and teamwork, acting as one to achieve the ultimate success.” 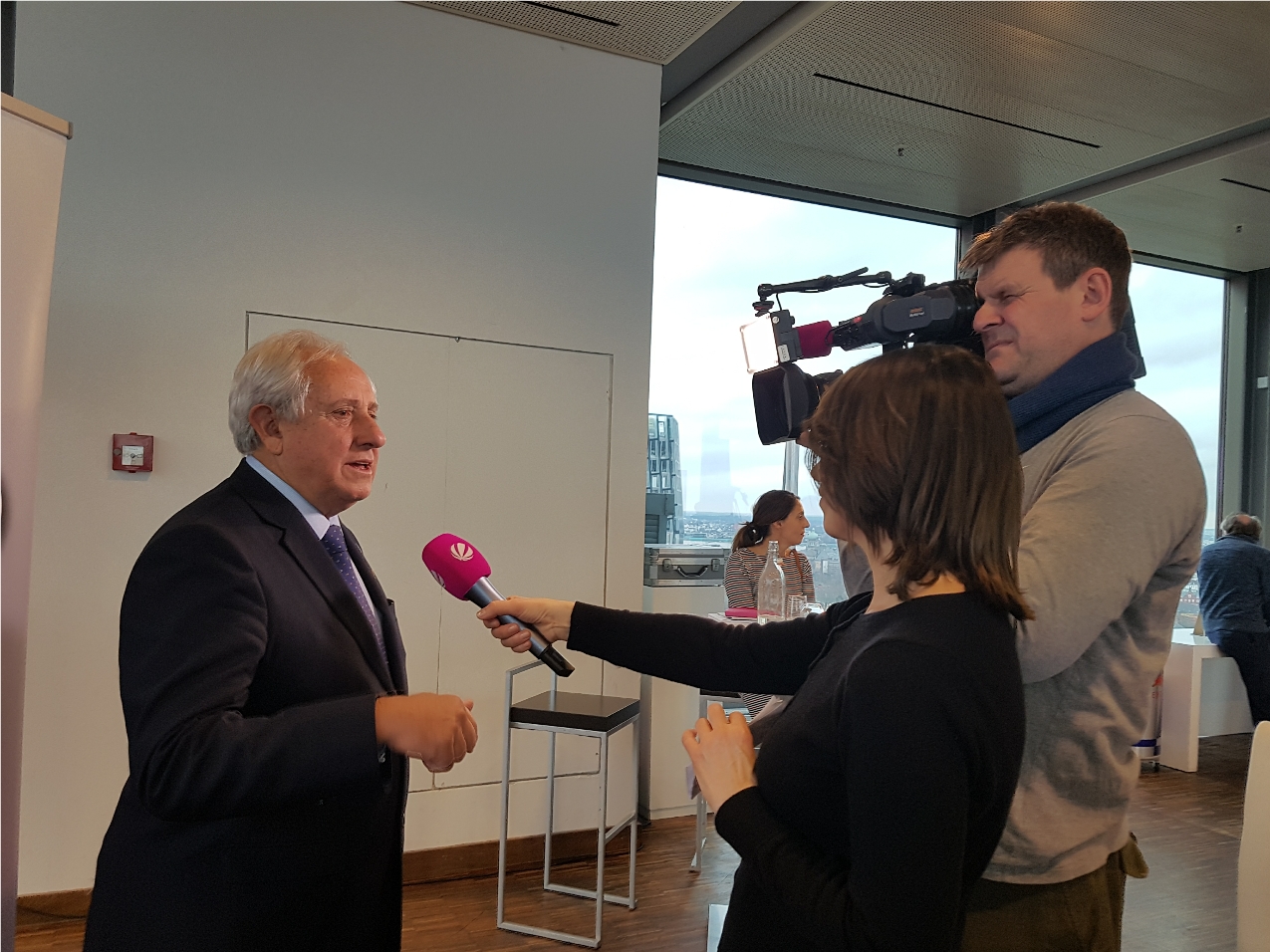 Last year, Vienna welcomed over 180,000 spectators throughout 10 days of world class action. The FIVB continues to put the fans first, maximising entertainment by pushing the boundaries of technology, innovation and digital broadcasting, and encouraging the fan to become part of the sport through active, fan-engagement.

“The approval for hosting the Beach Volleyball World Championships in 2019 is one more achievement for Hamburg – the Active City – and yet further confirmation that beach volleyball belongs in a major German city. The FIVB’s decision is also a compliment to everyone who supports and works for the sport in Hamburg. The Summer of 2019 will see the international beach volleyball elite thrill the world, and you can be sure that the temperature in Hamburg is guaranteed to rise when Laura Ludwig and Kira Walkenhorst begin the defence of their World Championships crown, in front of a passionate home crowd.” 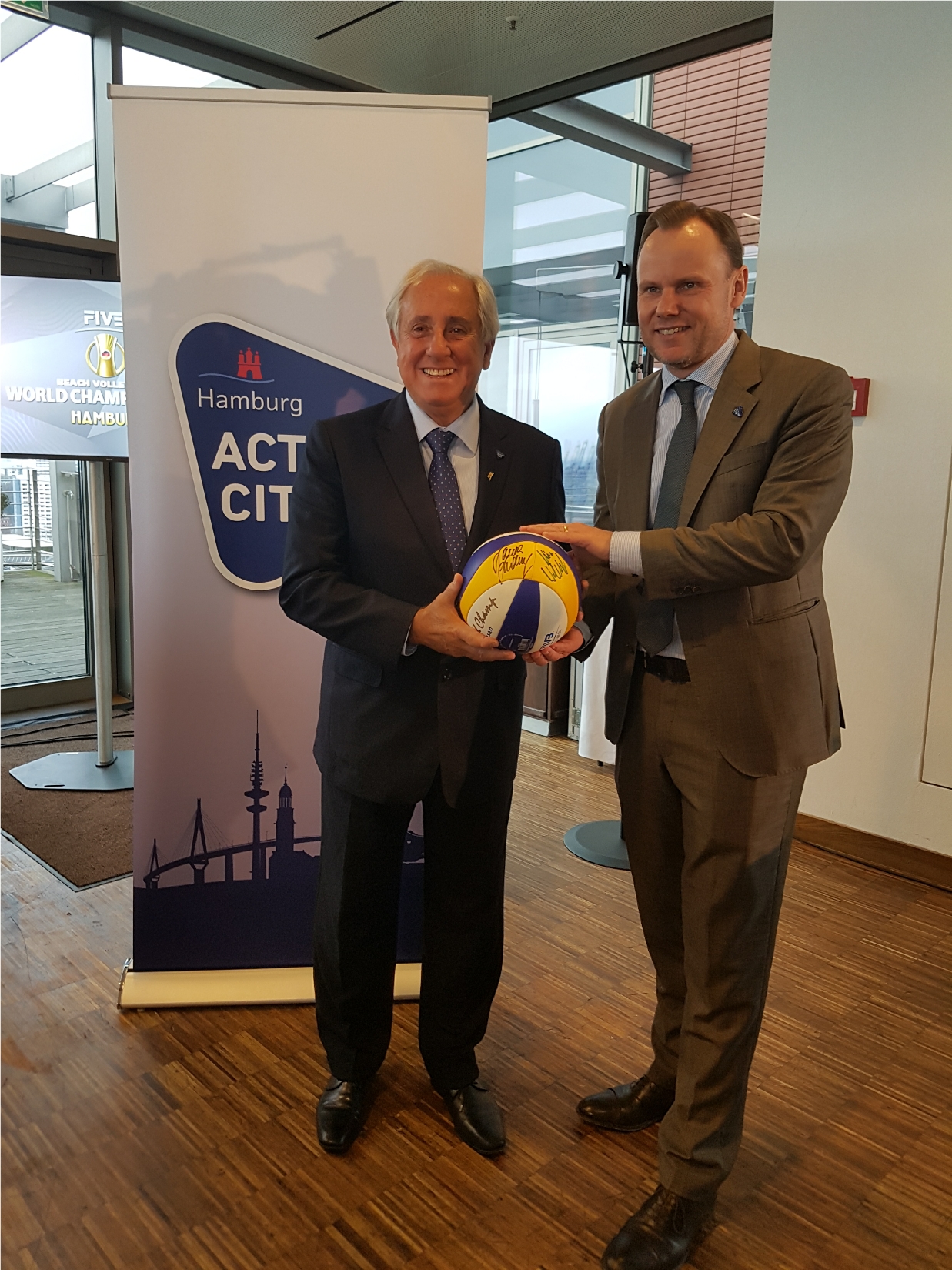 President Graça and Senator for Sport in Hamburg Andy Grote

The winning pairs in the men’s and women’s 2019 Beach Volleyball World Championships will ensure their country directly qualifies for the Tokyo 2020 Olympic Games.

“Today is a big day for beach volleyball in Germany and the German Volleyball Federation. After 14 years, and for the second time in history, Germany will host the Beach Volleyball World Championships. Hamburg is the perfect choice. The heart of the city and its citizens beats for beach volleyball and will make the World Championships an unforgettable event. Thank you to all of the parties involved who helped make it happen.”

Local fans will be hoping to see reigning champions Laura Ludwig and Kira Walkenhorst retain their crown in the women’s competition, while Brazilian pairing Evandro Goncalves and Andre Loyola will look to defend their title in Northern Germany. 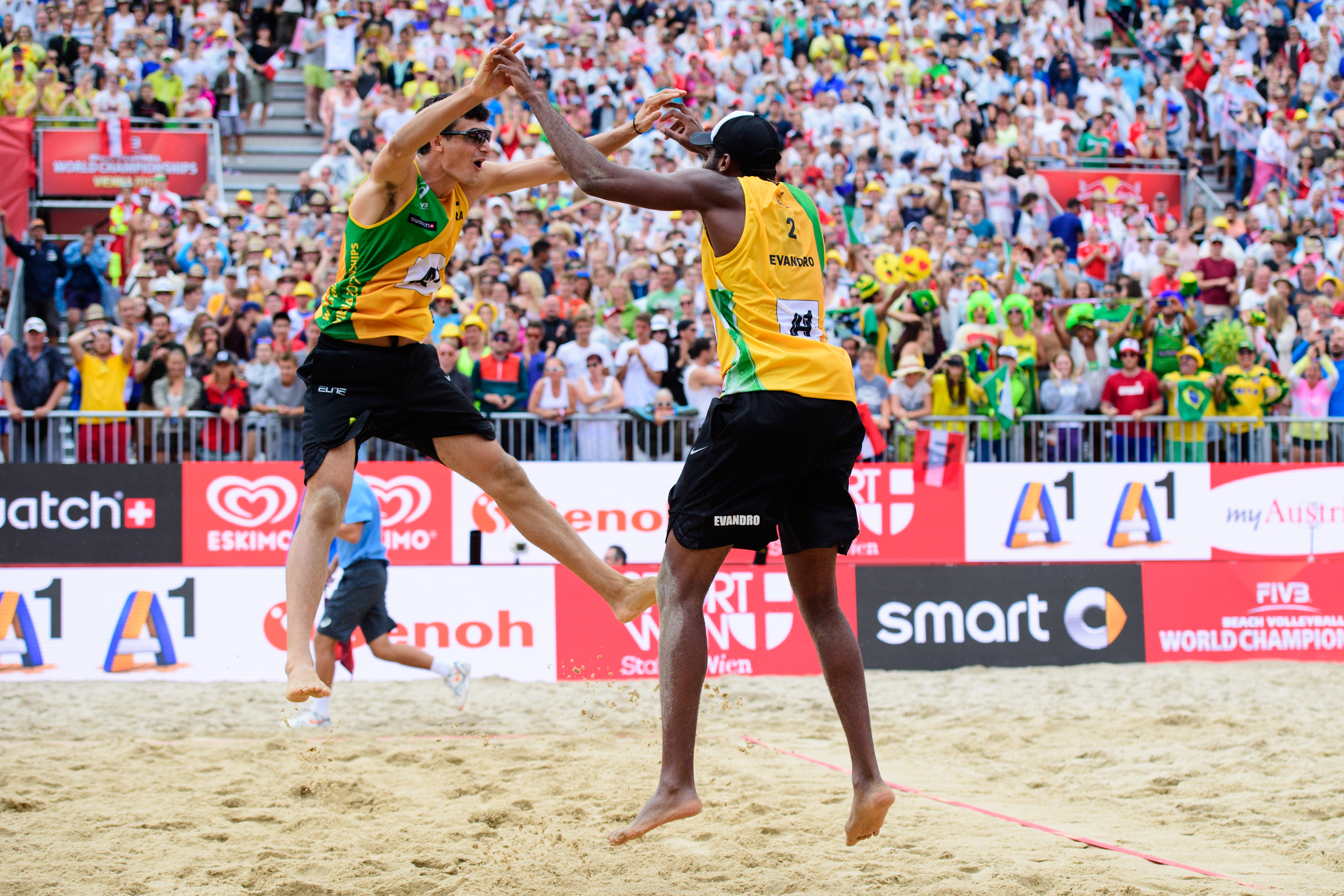 Will Brazilian pairing Evandro Goncalves and Andre Loyola defend their title in 2019?

The 2019 edition of the FIVB Beach Volleyball World Championships will involve 48 women and men’s teams, competing over a total of 208 matches for the prestigious title of world champions, with an overall prize money of $ 1 million.

“The Hamburg Major in 2016 as well as the World Tour Finals last year showed us what we are capable of and illustrated what can be achieved: it surpassed all of our expectations. After the World Championships in Vienna, we were able to set new benchmarks for the sport. We have the same goal for Hamburg and we are filled with enthusiasm.

“The City of Hamburg is the perfect partner. We are excited to collaborate on the organisation of the event and see how it sets free some unexpected, creative energies.

“Hosting the World Championships in Hamburg presents the city with a unique opportunity to show itself off as the flourishing, bustling, contemporary city that it is.” 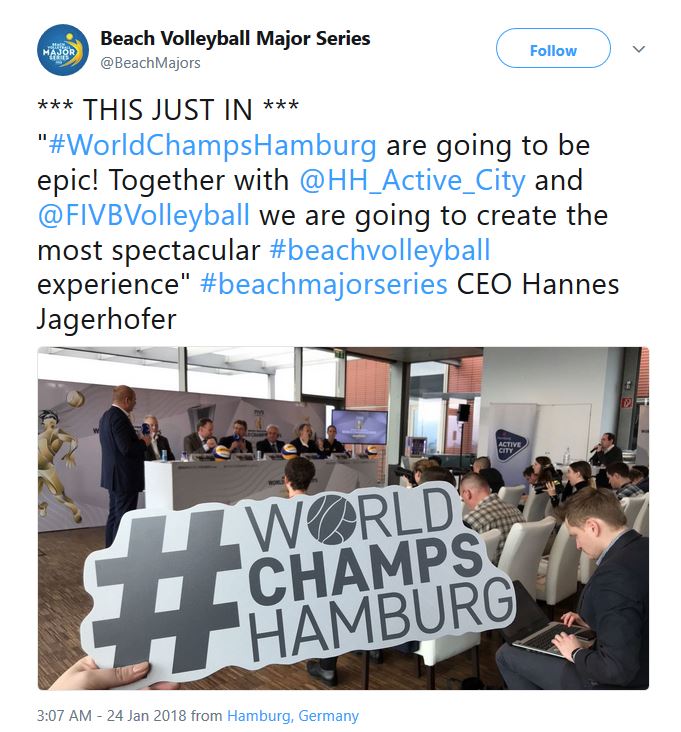 The famous 13,000-capacity Am Rothenbaum Stadium is steeped in tennis history, having hosted hundreds of top-class tournaments, but it has also hosted beach volleyball competitions in the past, including the FIVB World Tour Finals.