Heidrich puts injury behind her with winning start at The Hague 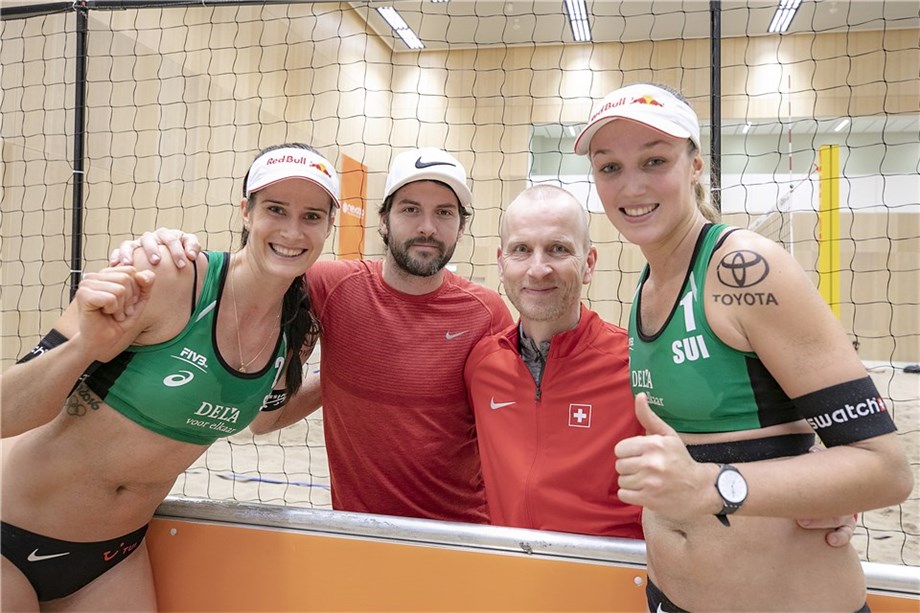 The Hague, Netherlands, January 3, 2019 – Joana Heidrich marked her return to a beach volleyball court in winning style as she and Anouk Verge-Depre opened the 4-Star Dela Beach Open with a win.
The Swiss pair beat Kelly Reeves and Brittany Howard of the USA 2-0 (21-18, 21-17). It is their first FIVB Beach Volleyball World Tour match together since the 5-Star Gstaad tournament in July, after which Heidrich took time off to resolve a long-standing injury.
“For me it is my first game for more than six months after surgery on my back to resolve a herniated disc,” Heidrich said. “It is great to be back on the court.
“It was not easy, but I think we made the right decision to take a break and fix it as now I feel really good on the court and there’s no pain while playing. I’m feeling good and am over 50 percent for sure, but there are still lots of things that I can do better.”
Quick links - Beach volleyball:
FIVB Beach Volleyball World Tour
FIVB.com - Beach volleyball
Latest Videos
Facebook
Twitter
Instagram
Heidrich and Verge-Depre have played together since the start of 2017. They have happy memories of playing in The Hague having won bronze when the city hosted a 3-Star tournament in 2017.
Both players featured at the Rio de Janeiro 2016 Olympic Games, and with the start of qualifying for Tokyo 2020 focusing players’ minds Heidrich has chosen a good time to be approaching full fitness.
“I did my rehab in Switzerland, we have a really great medical team there and my doctor and the whole medical team did a really good job,” Heidrich said.
“I made small steps forward in my rehab. It was great because I was mixing with other athletes and it was good to mix and push each other to return to fitness.”
The Netherlands’ leading pair Madelein Meppelink and Sanne Keizer made a winning start on centre court. They defeated Canada’s Amanda Harnett and Marie-Christine Lapointe 2-0 (26-24, 21-9).
“I think everyone could see we were pretty nervous in the first set,” Keizer said. “I am glad we could turn that round at the end of the first set and then you see that in the second set we relaxed a bit and immediately we reached our own level of play more.
“In the second set we were more calm, although the tension was still there. We really want to make the top eight in order to have a good start for Olympic qualification.”
The tournament runs from January 2-6 and is being played on indoor beach courts at the Sportcampus Zuiderpark. It is the second year in a row that The Hague has hosted a tournament at this time of year and it has proved popular among the players who are able to compete at a top-level tournament when they would normally be involved in warm weather training.