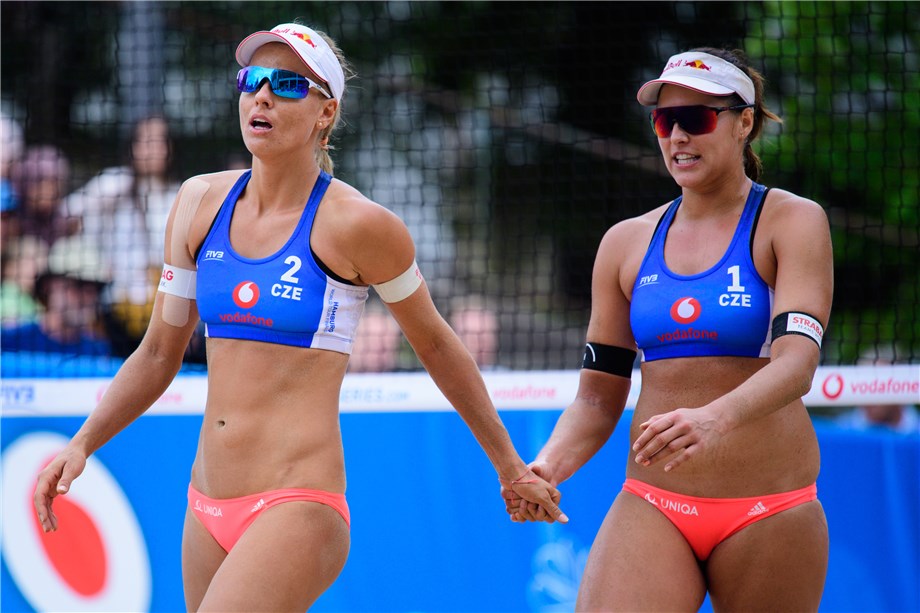 Lausanne, Switzerland, April 4, 2019 – Barbara Hermannova and Marketa Slukova are ranked first as the FIVB Beach Volleyball World Tour moves on to Xiamen in China for a 4-Star tournament that runs from April 23-28 on Guanyinshan Gold Beach.
It is the first 4-Star women’s tournament since The Hague 4-Star in the first week of January. The men’s most recent 4-Star was in the Doha from March 12-16.
Hermannova and Slukova will return to the court for the first time since August 2018 when they won silver at the Hamburg 2018 FIVB Beach Volleyball World Tour Finals. It completed a run of three tournaments in which they finished on the medal podium.
The Czech duo began by winning bronze at the CEV European Beach Volleyball Championships and followed up with gold at the Vienna 5-Star before completing their sweep in Hamburg. In 2018 they also won gold at the Ostrava 4-Star.
Canada’s Heather Bansley and Brandie Wilkerson are seeded two and Agatha Bednarczuk and Eduarda Santos Lisboa, who beat Hermannova and Slukova to Hamburg gold, are third seeds.
Lower down the seedings Chen Xue, a gold medallist at the Mazury 2013 FIVB Beach Volleyball World Championships, and Xinxin Wang are seeded 23rd.
In the men’s draw Norway’s Anders Mol and Christian Sorum are seeded first. The pair were the revelation of 2018 and won Hamburg 2018 gold to complete a run in which they won gold at the Gstaad and Vienna 5-Star tournaments and the European Championships.
They ended their year with gold at the Las Vegas 4-Star and then reached the quarterfinals in The Hague.
Poland’s Michal Bryl and Grzegorz Fijalek are seeded second and Latvia’s Aleksandrs Samoilovs and Janis Smedins are seeded third.
Chile’s Esteban and Marco Grimalt, who won back-to-back golds at the Sydney 3-Star and Doha 4-Star, are seeded 11th.