Home World Championships hold no fear for Wickler and Thole 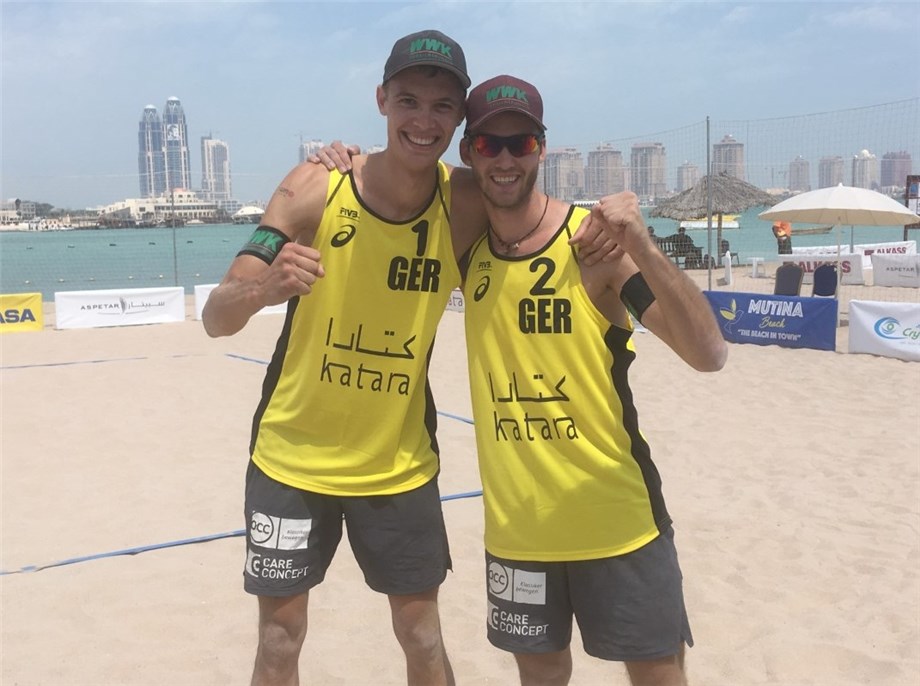 Doha, Qatar, March 14, 2019 – If being Germany’s leading men’s side at the Hamburg 2019 FIVB Beach Volleyball World Championships is adding any extra pressure to Clemens Wickler and Julius Thole, then they are doing a good job of hiding it.
Wickler, 23, and Thole, 21, are currently competing at the FIVB Beach Volleyball World Tour Katara Beach Cup in Doha that runs from March 12-16, and they continued their good form by reaching the second knockout round on Thursday morning.
Quick links - Beach volleyball:
FIVB Beach Volleyball World Tour - Doha
FIVB.com - Beach volleyball
Facebook
Twitter
Instagram
They made the beach volleyball sit up and take notice at the end of the 2017-18 season when they finished fourth at the Hamburg 2018 FIVB World Tour Finals, which took place at the 13,000-capacity Rothenbaum Stadium and which will be at the heart of the World Championships.
“We don’t have so much pressure, it is only our second season,” Wickler said. “We played well at the end of last season, but before then it was tough. We don’t feel any pressure, we just want to have fun and see how we do in the tournament.
“Last year in the World Tour Finals was so much fun, we’re really looking forward to playing in front of our home crowd. It is very different to other tournaments. It is just the best feeling to play with the whole crowd cheering for you.”
Wicker and Thole have been together since February 2018 when they played together at the Kish Island 3-Star. They won bronze at the Espinho 4-Star to record their first World Tour medals and then were given a wild card place at the World Tour Finals.
They began 2019 by winning their first World Tour silver, at The Hague 4-Star and currently they sit 14th in the World Tour Rankings. The last German duo to win the World Championships were Julius Brink/Jonas Reckermann who won the Stavanger 2009 edition.
“At the moment it isn’t hard to forget about it because every tournament is different and how we prepare for every tournament is different,” Wickler said.
“Of course we’re looking forward to the World Champs in Hamburg. We know the venue and know how the crowd reacts. It was good for us to play there, but the World Championships will be bigger than the World Tour Finals last year.”