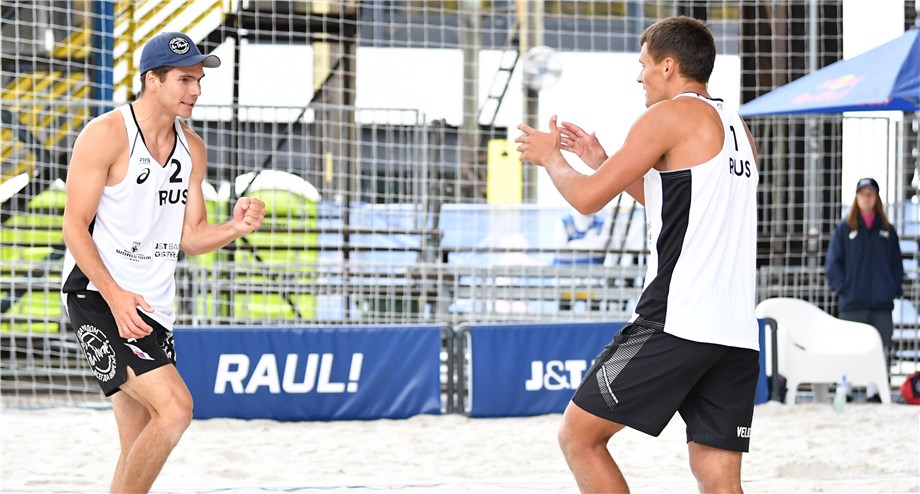 Igor Velichko & Maksim Hudyakov during their qualification match at Ostrava

Ostrava, Czech Republic, May 29, 2019 – Igor Velichko & Maksim Hudyakov are one of four Russian teams who will take part in the men’s 2019 FIVB Beach Volleyball World Championship in Hamburg next month. For either of them, 23-year-old Velichko and 30-year-old Hudyakov, this will be the first appearance at such a big forum, but they vowed to stay calm and approach it just as they would any normal competition.
In fact, this team was formed for the specific purpose to qualify for the World Championship. Hudyakov had been playing with Ruslan Bykanov for a while and in 2018 claimed his first World Tour medals (two gold and one bronze) as well as some podium finishes on the Snow Volleyball European Tour with that partner.
In the same year, Velichko teamed up with Oleg Stoyanovskiy and also earned three medals (one of each colour) on the World Tour. Then he played three events with Nikita Liamin, but at the Jinjiang four-star last week Velichko & Hudyakov appeared as a pair and finished 25th.
“We took account that with our usual partners we would not be able to find a spot at the World Championship. But when Igor and I combined our points, we could make the cut,” Maxim Hudyakov explained. “This will give our country a rare chance to be represented at the World Championship by four duos.”
In addition to facing up to the best teams in the world, Velichko & Hudyakov find some extra motivation from the opportunity to race with their compatriots at such a high level for bragging rights as the best Russian team.
“Of course, we would like to achieve the best result among the Russian pairs at the World Championship,” Hudyakov continued. “When you play in a ‘Russian derby’, as they call it, you want to prove that you are better – right here, right now. Matches between teams from the same country are always very interesting because everybody knows each other well and wants to prove himself better.” 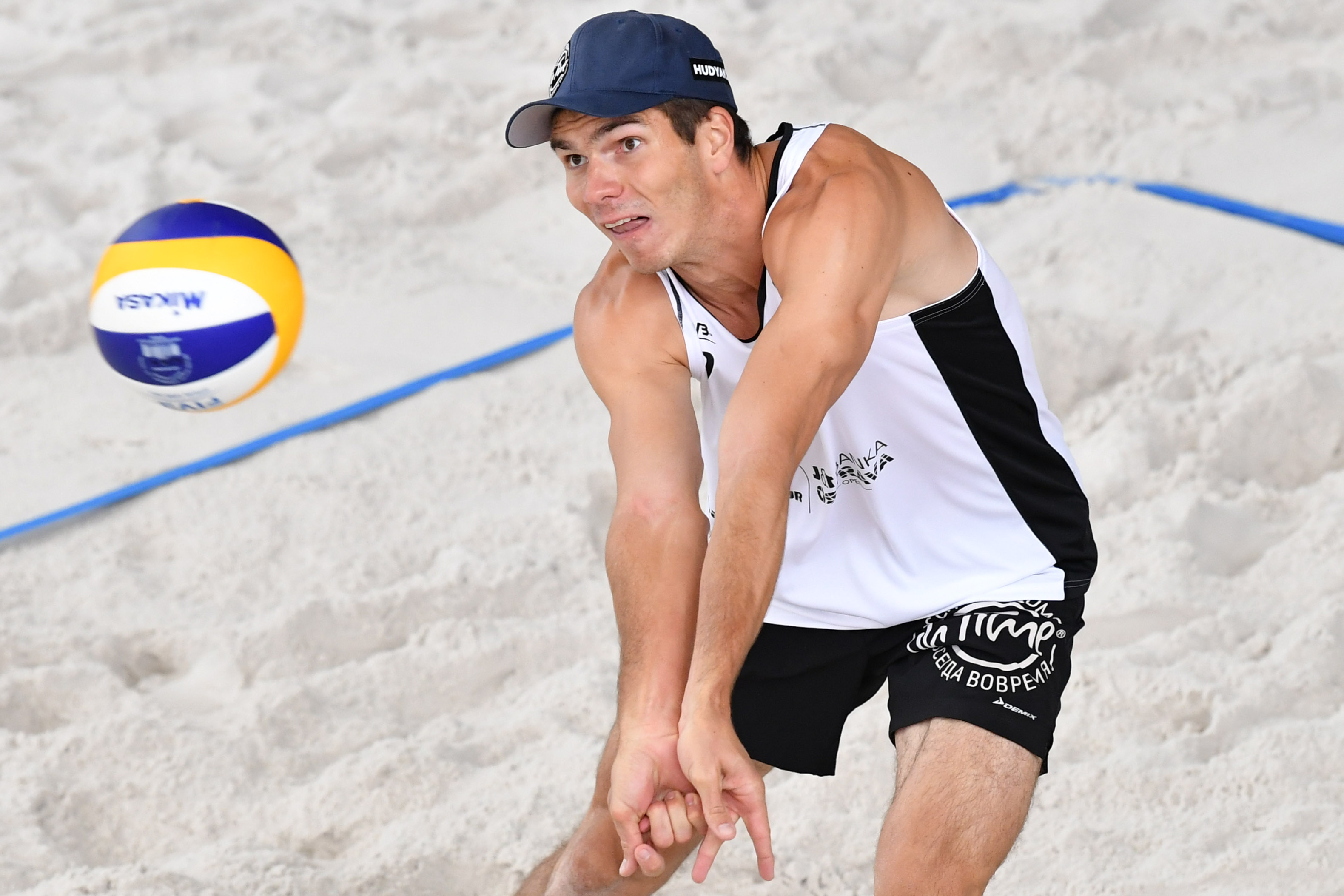 Maxim Hudyakov in reception
Less than a month to first whistle in Hamburg, Velichko & Hudyakov appeared at their second tournament together, the four-star J&T Banka Ostrava Beach Open in the Czech Republic, but after a fierce battle in their first qualification match with Spaniards Cesar Menendez Ortego & Alejandro Huerta Pastor they lost in a nail-biting tie-breaker – 2-1 (21-17, 12-21, 22-20) – and missed the opportunity to get some more competitive playing time as a team on the courts in Ostrava. Instead of pulling their hairs over it, the Russians took the loss calmly and said they are still hoping to use the short period of time left in the best possible way to prepare for the big event in Hamburg.
“It was a very good game that went back and forth. We were a little bit unlucky and we did not use all the opportunities we got, but the opponents are also a very good team, from a country known for its good beach volleyball players,” commented Hudyakov. “We will try to play better at the next tournament. This is only our second tournament together. We have to keep improving so we can successfully represent our country at the World Championship.”
“We have two more tournaments before the World Championship. We will do our best to gain maximum results and play as many games as possible. We will also have some training camps for a couple weeks,” said Velichko. “Yes, of course, we could always use more time to prepare, but there isn’t any, so we also have to hope for the best.” 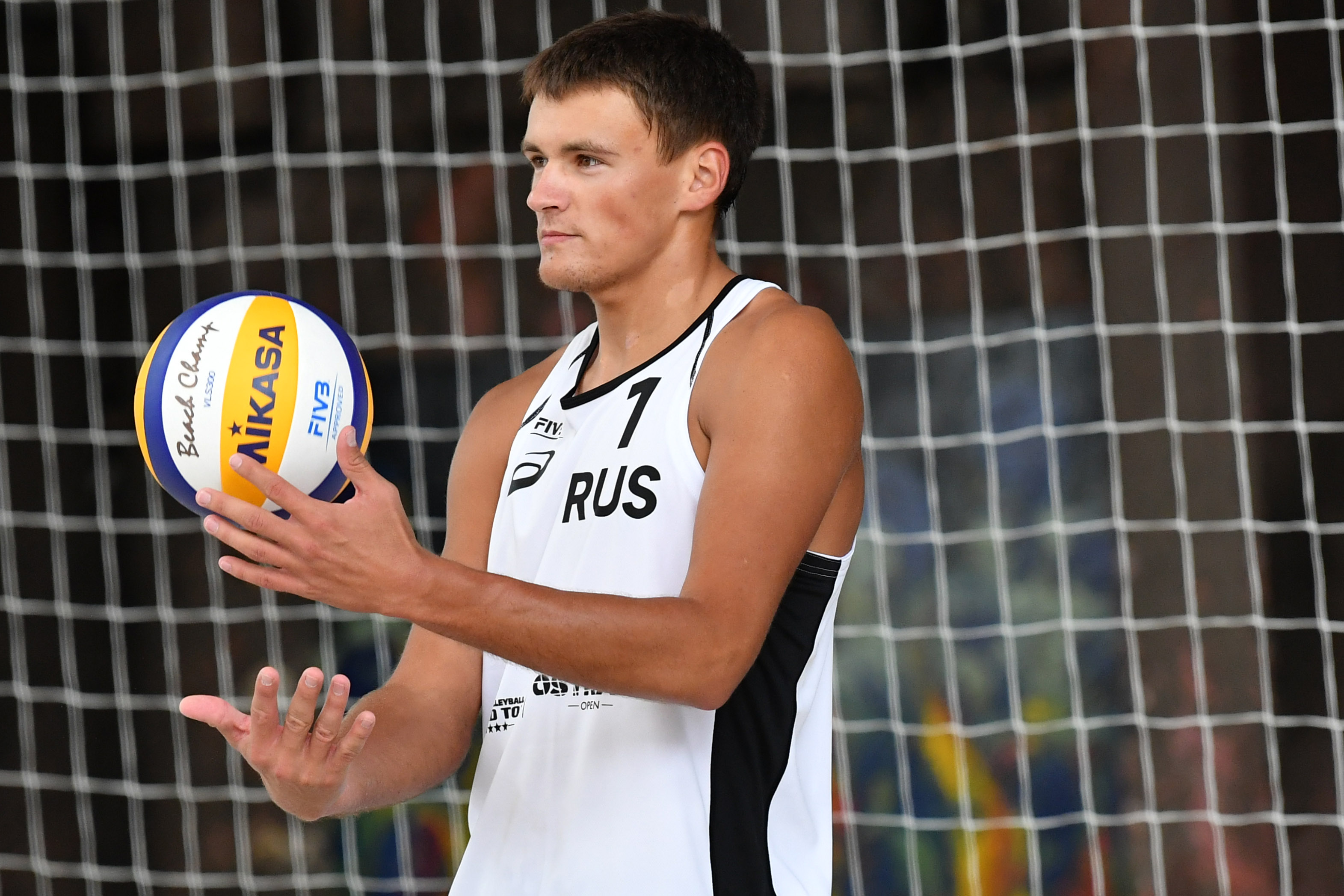 Igor Velichko ready to serve
As professional athletes, they are well aware that staying calm and focused is important.
“This will be the first World Championship, both for Igor and for me, so we will try hard,” Hudyakov pointed out. “But we should not get too excited and emotional. We should stay calm, like in any game.”
“I never expected to be able to play at the World Championship at such an early age, but I take this opportunity as something normal - we had a good run with Oleg Stoyanovskiy and I collected enough points to be able to go through, together with Maxim,” Velichko added.
Setting aside his disappointment with the result of their match, Maxim Hudyakov also wanted to emphasize that “the tournament organization here, in Czechia, is excellent! The venue is very interesting and offers a great atmosphere for the event.”
Quick links - Beach volleyball:
FIVB Beach Volleyball World Tour - OstravaFIVB.com - Beach volleyballFacebookTwitterInstagram