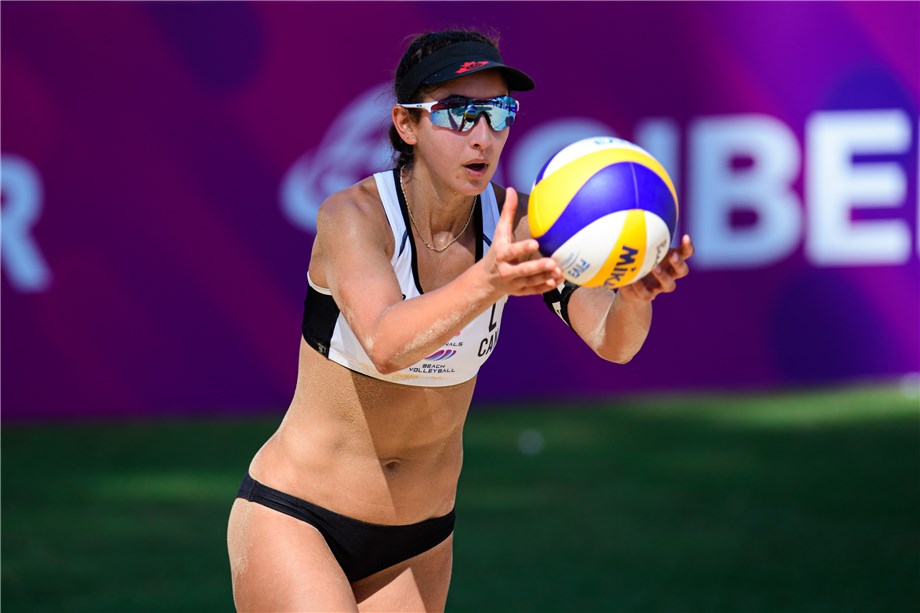 Focused on Mikasa is Canadian world champion Melissa Humana-Paredes as she and partner Sarah Pavan posted two wins Friday at the FIVB World Tour Finals in Rome at the Foro Italico.

Rome, Italy, September 6, 2019 - On a day when they were celebrating their two-month anniversary in winning Canada's first-ever beach volleyball world championship, Melissa Humana-Paredes and Sarah Pavan posted a pair of victories here Friday at the $600,000 FIVB World Tour Finals at the Foro Italico. 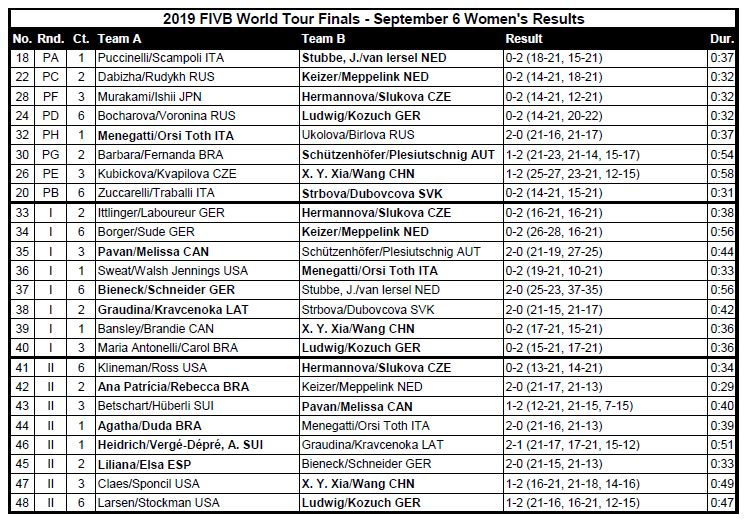 After being upset by American rivals Kelly Larsen and Emily Stockman in pool play Thursday, the top-seeded Humana-Paredes and Pavan rebounded Friday by defeating teams from Austria and Switzerland to advance to a Saturday afternoon quarter-final match against fourth-seeded Brazilians Agatha Bednarczuk/Eduarda "Duda" Lisboa.
Highlighting the Canadian effort Friday was an early evening 2-1 (21-12, 15-21, 15-7) Round of 16 win in 40 minutes over fifth-seeded Nina Betschart/Tanja Huberli of  Switzerland,  It was Humana-Paredes and Pavan's sixth win in as many FIVB World Tour meetings with the Swiss, who dropped a semi-final match July 5 to the Canadians at the FIVB World Championships in Hamburg, Germany.
Quick links - Beach volleyball:
FIVB Beach Volleyball World Tour Finals - Rome
Facebook
Twitter
Instagram
"It has been an up-and-down couple of days, that’s for sure, and that’s to be expected at the end of the season," Humana-Paredes after the Swiss match. "At this point it’s just about surviving and giving everything, you’ve got.  It’s been a long season, you can see it’s wearing us down but at this point it’s survival of the fittest and it’s whoever wants it more, who has the heart."
In seeking their fourth FIVB World Tour gold medal this season, Humana-Paredes said that "everyone’s coming after us, everyone’s going after each other. These are precious tournaments and it’s really coming down to the wire for the (Olympic) qualifications and stuff. Everyone’s playing their hearts out."
When asked about being able to sleep after two wins Friday, Humana-Paredes offered, "Oh, can we? When’s the first game? It feels great to sleep, sleep is our friend."
The Canadians' first game Saturday will be their ninth FIVB World Tour match against Agatha and Duda.  The two teams have split the previous eight matches with Humana-Paredes and Pavan winning the last meeting August 3 in the semi-finals at the Vienna Major where the Canadians eventually netted the gold medal.
Agatha and Duda reached the quarter-finals by eliminating eighth-seeded Marta Menegatti and Viktoria Orsi Toth of Italy 2-0 (21-16, 21-13) in a 39-minute center court win.  It was the Brazilians third FIVB win in as many matches with Menegatti and Orsi Toth.
“Playing the home team is never easy," said Agatha.  "They’ve been playing well against the Brazilians and we prepared well for anything they could do differently. We also got to practice against them on center court before the tournament started and I think that helped us to adjust quickly since the stadium is very different from the side courts. It was their third match today and I felt they were a little bit tired too, so we tried to take advantage of it since we only played once.”
To reach the Round of 16, Menegatti and Orsi Toth had to defeat 24th-seeded qualifiers Ekaterina Birlova/Evgeniya Ukolova of Russia 2-0 (21-16, 21-17) in a 37 minute pool play match before advancing in the elimination bracket with a 2-0 (21-19, 21-10) victory in 33 minutes over 11th-seeded qualifiers Brooke Sweat/Kerri Walsh Jennings of the United States.
Also posting Round of 16 wins Friday evening were sixth-seeded Rebecca Cavalcanti/Ana Patricia Silva of Brazil, 10th-seeded Joana Heidrich/Anouk Verge-Depre of Switzerland, 19th-seeded Elsa Baquerizo/Liliana Fernandez of Spain, 20th-seeded Margareta Kozuch/Laura Ludwig of Germany, 21st-seeded Fan Wang/Xinyi Xia of China and 22nd-seeded Barbora Hermannova/Marketa Slukova of the Czech Republic.
The last event on the 2018-2019 FIVB World Tour calendar, the FIVB World Tour Finals concludes this weekend with the quarter- and semi-final contests Saturday followed by the medal matches Sunday at the Foro Italico where the winning men’s and women’s team share the $40,000 first-place prizes.