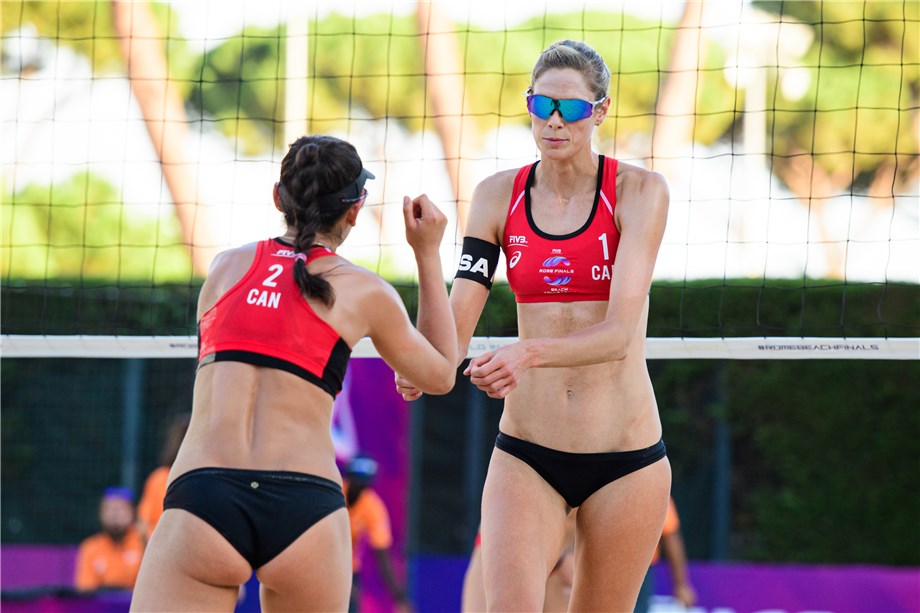 Rome, Italy, September 5, 2019 - With their ticket to the Tokyo 2020 Olympic Games already secured, reigning FIVB world champions Melissa Humana-Paredes and Sarah Pavan of Canada are not taking it easy before next summer’s classic. 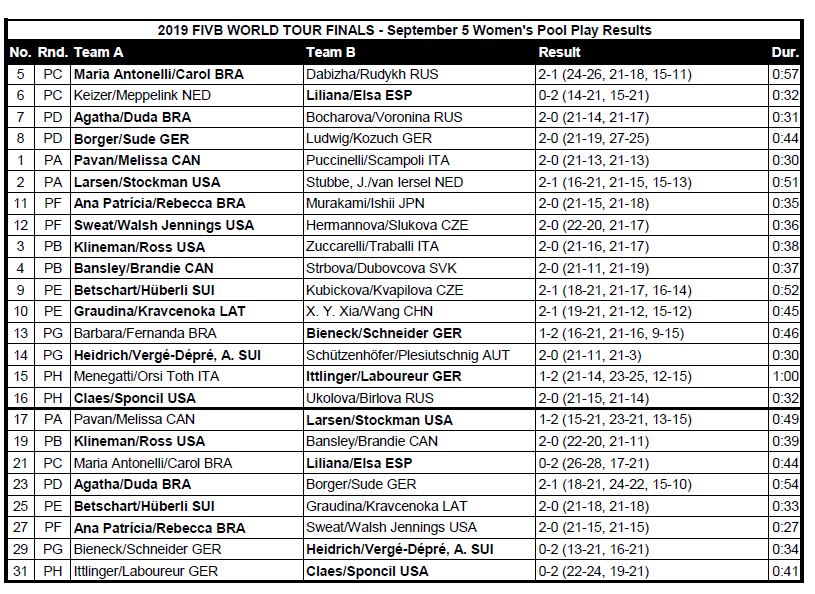 The top-seeded Humana-Paredes and Pavan started play here Thursday morning at the $600,000 FIVB World Tour Finals by defeating 32nd-seeded Claudia Puccinelli/Claudia Scampoli of Italy 2-0 (21-13, 21-13) in 30 minutes to advance to an early evening match against 16th-seeded Kelley Larsen/Emily Stockman of the United States.
With the winning team securing the group title and a bye into the second-round of elimination on Friday, Larsen and Stockman began in Pool A with a 2-1 (16-21, 21-15, 15-13) win in 51 minutes over 17th-seeded Joy Stubbe/Marleen Van Iersel of the Netherlands.
The Canadians ended play Thursday by dropping a 2-1 (15-21, 23-21, 13-15) in 49 minutes to Larsen and Stockman.  It was the second meeting in less than a week between the two teams with Humana-Paredes and Pavan defeatting the Americans in a domestic event Saturday in Chicago.
Quick links - Beach volleyball:
FIVB Beach Volleyball World Tour Finals - Rome
Facebook
Twitter
Instagram
When asked about resting on their laurels after winning the FIVB Beach Volleyball World Championships on July 6 in Germany by defeating Americans Alix Klineman and April Ross in the Hamburg finale, Humana-Paredes said “that is an interesting question. People think that it actually gives us the opportunity to just pick and choose tournaments and kind of coast a little bit, but I think it’s the opposite for our team.”
Humana-Paredes then added “we’re working on our seeding and that’s almost harder because we’re then trying to compete against a small group of people at the very top and try and edge them out and get the best position for Tokyo. We still go into every tournament playing one way and the goal is to win. It doesn’t change. We’ve got to work even harder.”
Pavan added “our goal since the beginning is to go into the Olympics as a one or two seed. We’ve been aiming for that since last September. Obviously, it’s nice to have qualified already. The top four teams right now are super close, and Alix and April are just adding points this tournament and Ana Patricia and Rebecca have a lot of really good results. We need to make sure we keep performing and getting the results we need because we don’t want to let it slip away.”
As a fifth-place finisher in the Rio 2016 Olympic Games with Heather Bansley, Pavan added that her team had a “couple of results that haven’t been great that we want to replace. If we can replace those with the points we can get in this tournament, that would be awesome.”
In closing Pavan said “we have more flexibility (in the schedule). Next year we maybe won’t have to do six weeks in a row like we did this year because that’s exhausting. But at the end of the day, this is still our livelihood and we enjoy playing and we like to play tournaments.”