Saifeddine Elmajid (second from the left) hits against Iran's Bahman Salemi (second from the right) as Qatari partner Benlouaer Ziad (left) and Arash Vakili follow the action Wednesday at the Dargahan Cup. 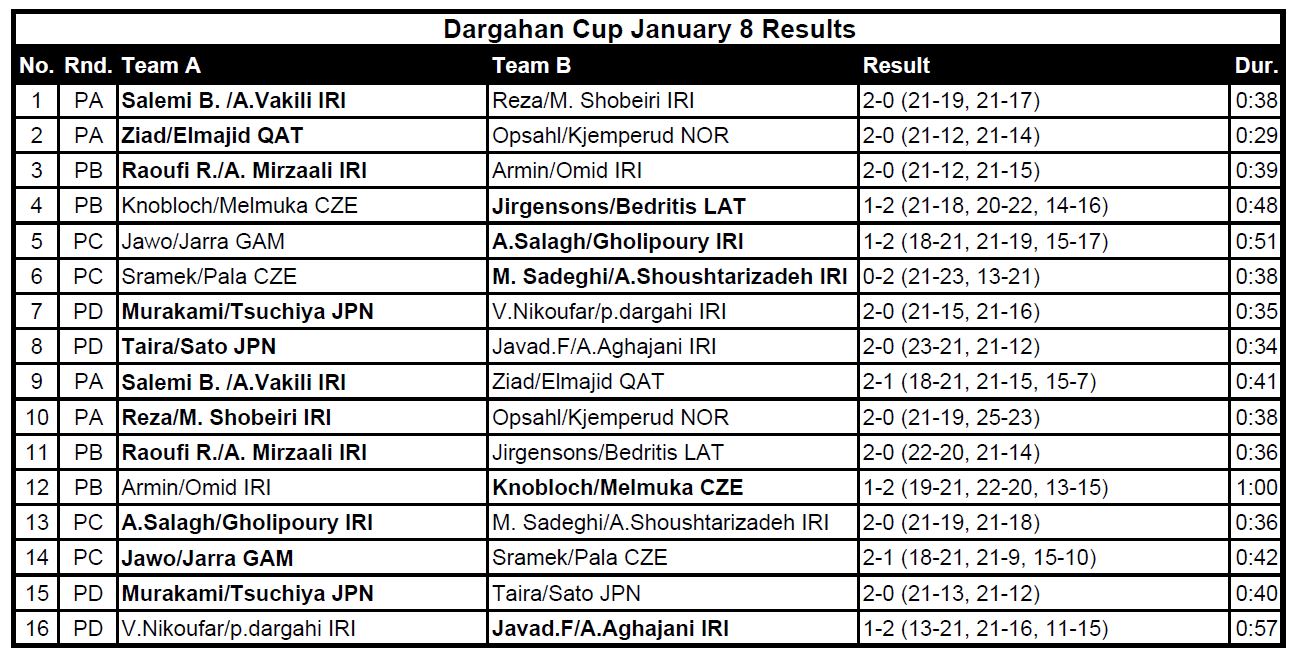 Salemi and Vakili, who are competing together in their 13th FIVB World Tour event with a gold, silver and bronze medal to their credit, defeated teams from Iran and Qatar to win Pool A Wednesday. As the Dargahan Cup's top seeds, Salemi and Vakili have a 27-16 FIVB match mark together with a 16-4 World Tour record on Iranian sand. The pair placed 17th last July at the FIVB World Championships in Germany.
In winning the Dargahan Cup's Pool B crown, the second-seeded Mirzaali and Raoufi defeated tandems from Iran and Latvia Wednesday. Mirzaali and Raoufi are competing in their 12th World event together with a 32-15 World Tour record and six medals (a gold, three silvers and two bronzes).  Like Salemi and Vakili, Mirzaali and Raoufi have a 16-4 FIVB match record together on Iranian sand.
Joining the top seeds as group leaders Wednesday were 14th-seeded qualifiers Bahman Gholipoury/Aghamohammad Salagh of Iran (Pool C) and fourth-seeded Hitoshi Murakami/Takashi Tsuchiya of Japan (Pool D).
With two group match victories Wednesday, the pool winners advance to the Dargahan Cup quarterfinals Thursday while the second- and third-place finishers in each group meet in the first-round of elimination bracket play. The semifinal and medal matches will be staged Friday.

The first event on the 2020 international beach volleyball calendar, the Dargahan Cup is the second of three events in Iran on the 2019-2020 World Tour calendar. Salemi and Vakili placed third in the season opening FIVB tournament in Iran at Bandar Torkaman by defeating Murakami/Tsuchiya in the bronze medal match. Mirzaali and Raoufi tied for fifth with Gholipoury/Salagh at last October’s event in Bandar Torkaman.
Quick links - Beach volleyball:
FIVB Beach Volleyball World Tour - Qeshm, Iran
Facebook
Twitter
Instagram
The third Iranian event is also an inaugural men's only tournament and will be held March 3-7 in Bandar Abbas, on the southern coast of mainland Iran.